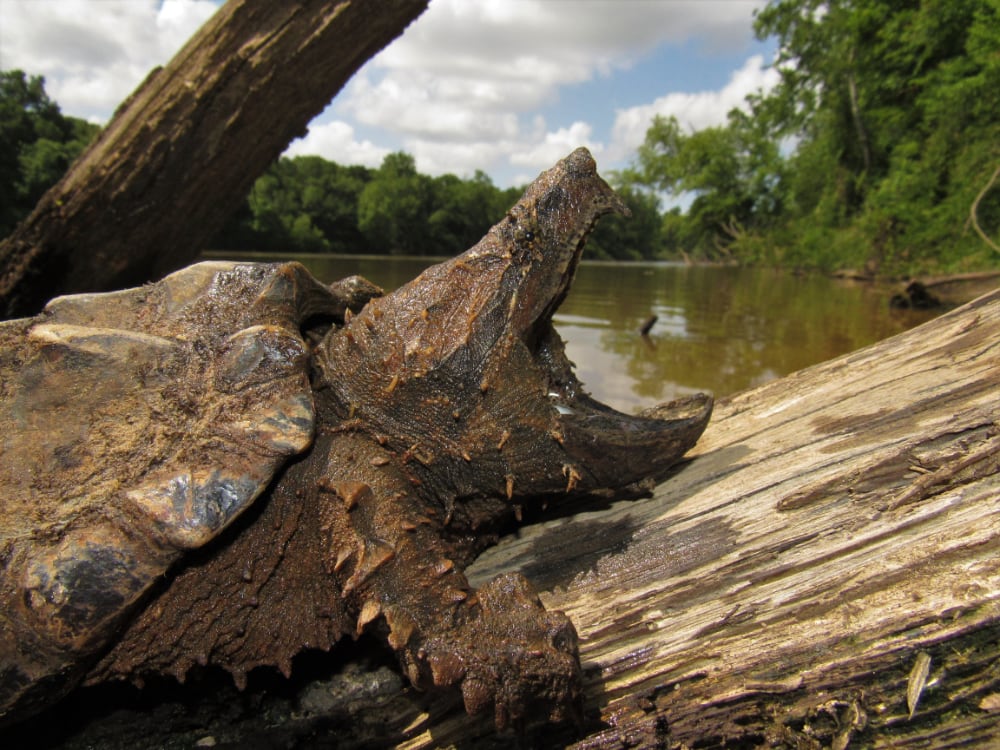 The alligator snapping turtle is listed as vulnerable by the IUCN. Photo by Gabbie Berry/Shutterstock

The alligator snapping turtle is protected from commercial harvest in all states in which it can be found.

Overharvesting for the meat trade has led to severe population declines of the alligator snapping turtle.

The U.S. Fish and Wildlife Service has proposed listing the alligator snapping turtle (Macrochelys temminckii) as threatened under the Endangered Species Act. The service says the reptile has suffered from decades of over harvesting for domestic and international meat consumption, nest predation, recreational and illegal harvest and collection and fishing. The species has suffered population declines through the 20th century do in large part to commercial harvest of the species. It is now illegal to commercially harvest the turtle in all states within its range.

“These magnificent reptiles are sometimes called the dinosaurs of the turtle world because they look very prehistoric,” Leopoldo Miranda-Castro, the Service’s regional director for the South Atlantic-Gulf and Mississippi-Basin regions, said in a statement released to the media. “The impacts of overharvesting and other human activities, along with the reality that they take up to 21 years to reproduce combined to put the alligator snapping turtle in peril. The Service will continue to work with all the state agencies to gather the necessary science to conserve and manage this iconic species.”

The USFWS is working to bolster the populations of the turtle in the wild with captive rearing and release efforts as wells habitat restoration and improvement.

The service conducted a Species Status Assessment and determined that the reptile’s populations are in decline and are expected to continue on a downward trend for the foreseeable future.

Public comments on the proposal will be accepted on or before January 10, 2022. This can be achieved electronically via “the Federal eRulemaking Portal (http://www.regulations.gov) must be received by 11:59 p.m. Eastern Time on the closing date. In the Search box, enter FWS–R4–ES–2021–0115, which is the docket number for this rulemaking.”

A virtual public meeting and hearing is scheduled for December 7, 2021 from 6:00 – 8:30p.m. CT (7:00 – 9:30 p.m. ET) via the Zoom online video platform and via teleconference. You must register for the Zoom meeting at https://www.fws.gov/southeast/wildlife/reptiles/alligator-spanning-turtle/#virtual-meeting-and-hearing.

The alligator snapping turtle (Macrochelys temminckii)is protected from commercial harvest in all states in which it can be found. It is listed as vulnerable by the IUCN. Alligator snapping turtles live in river systems that drain into the Gulf of Mexico, from Florida to Texas and as far north to southern Iowa. They are large turtles with a powerful bite, capable of inflicting serious injury on humans. They are a long-lived turtles with some estimates putting the lifespan of up to 150 years.