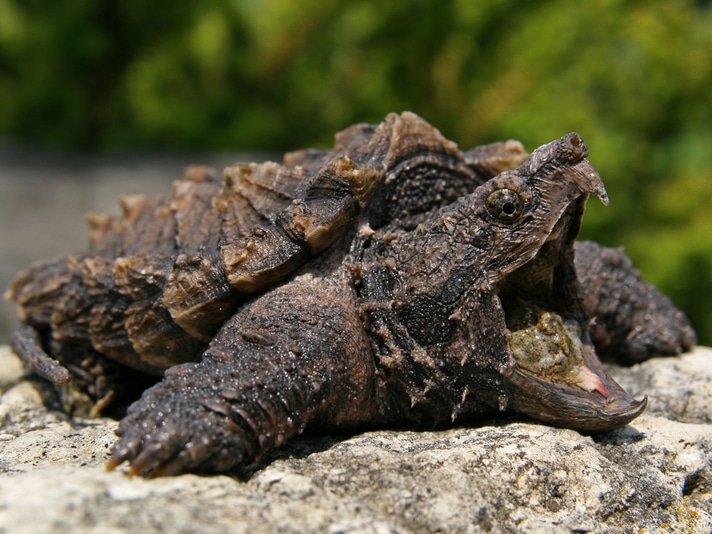 The turtle came to Sunken Gardens in the 1960s and was popular with Sunken Garden guests. Photo by Ryan Bolton/Shutterstock

Mac, the popular alligator snapping turtle (Macrochelys temminckii) that has greeted visitors for more than 50 years at the Sunken Gardens in St. Pete

“The Sunken Gardens family, and especially the animal care team members are deeply shocked and saddened by this unexpected loss. Mac showed no signs of injury, illness or distress prior to his death,” Dwayne Biggs, supervisor of Sunken Gardens said in a statement on Facebook.

The turtle came to Sunken Gardens in the 1960s and was popular with Sunken Garden guests. He held court at the Gardens in one of the most beautiful areas, according to the social media post.

“Mac was an important part of Sunken Gardens and a special turtle,” Biggs said. “We share the heartbreak with the animal care team who knew him best, as well as our admiration for their outstanding commitment to Mac and to all the animals in our care.”

It is not yet known how Mac died. The official cause of death may not be known for several weeks, until a necropsy is performed.

Not only was Mac a celebrity at the Gardens, he also was featured in the children’s book, “Sophie and Zack at Sunken Gardens,” by Robin Gonzalez.

The alligator snapping turtle (Macrochelys temminckii)is protected in the state of Florida and is a species of special concern based on Florida’s Endangered and Threatened Species Rule. It is listed as vulnerable by the IUCN. Alligator snapping turtles live in river systems that drain into the Gulf of Mexico, from Florida to Texas and as far north to southern Iowa. They are large turtles with a powerful bite, capable of inflicting serious injury on humans. They are a long-lived turtles with some estimates putting the lifespan of up to 150 years.