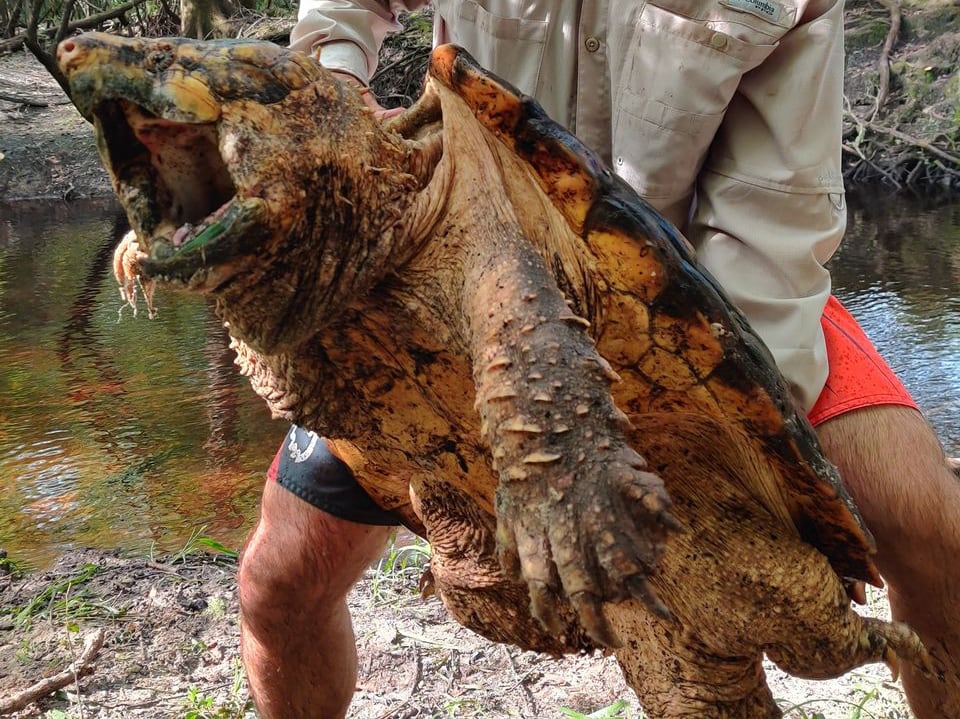 Biologists at the Florida Fish and Wildlife Research Institute were checking traps last week that were set for the Suwannee alligator snapping turtle (Macrochelys suwanniensis), and were surprised with what they had captured, a 100-pound male and a 46-pound female.

The FWC announced on its Facebook page that it is working with other researchers in the states of Florida and Georgia in an effort to learn more about the distribution of this species, which is listed as threatened in Florida.

The large turtles were captured in hoop nets that were set in the New River, a blackwater stream that the FWC says has low biological productivity, making the presence of these chelonians a surprise.

This week our biologists were out checking traps set for the Suwannee alligator snapping turtle, Macrochelys…

“The Apalachicola species occurs from the Ochlockonee drainage west to the Choctawhatchee drainage in Florida, Georgia, and Alabama,” the FWC wrote on Facebook. “The validity of the Apalachicola species has been disputed by other researchers, but everyone agrees that the Suwannee species is distinct. The Suwannee alligator snapping turtle has been isolated for at least 5.5 million years, during which time it has undergone sufficient evolutionary changes to differentiate it from other alligator snapping turtles.”

Alligator snapping turtles are the largest turtle in North America and the largest freshwater turtle in the world. They are known for their powerful jaw and glacially slow movements. They are found in river and drainage systems of the Gulf Coast region of the United States and feed on fish, dead animal matter and small mammals such as muskrats.