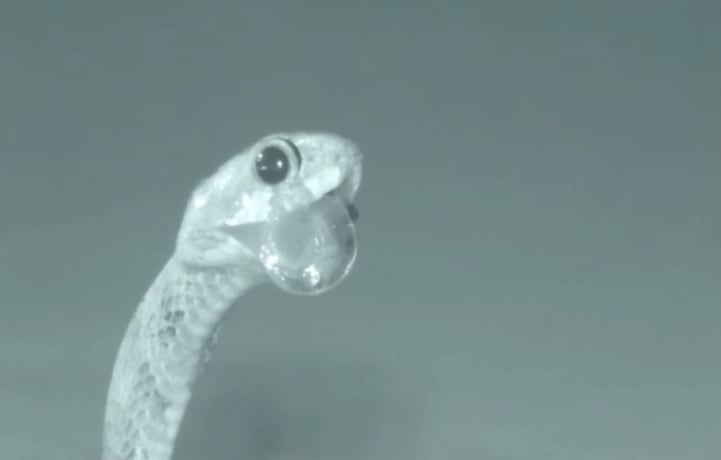 Researchers From Japan and Malaysia have discovered a unique feeding behavior with the blunt-headed snail-eating snake, (Aplopeltura boa) whereby it u

Researchers From Japan and Malaysia have discovered a unique feeding behavior with the blunt-headed snail-eating snake, (Aplopeltura boa) whereby it uses its mandible, or jaw, to cut off a snail’s operculum, the indigestible part of a snail, before it consumes the soft body. The researchers call the behavior “mandibular sawing.”

The operculum is essentially the trap door that closes the aperture of the shell when the snail’s soft body is retracted back into the shell. The snake uses what the researchers call long sliding excursions of one side of the mandible to saw. The upper jaws and mandible on the other side keep a strong hold of the slippery snail.

“This behaviour, which we call ‘mandibular sawing’, is made possible by extraordinarily independent movements of the jaw elements and is a surprising departure from usual feeding behaviour in vertebrates,” the researchers wrote in their paper, “Mandibular sawing in a snail-eating snake.”

The research was conducted on Borneo island in 2018. The researchers say that it is the first reported discover of a snake species that uses its lower jaw to saw apart its prey.

From the study: Infrared images illustrating mandibular sawing by the blunt-headed snail-eating snake, Aplopeltura boa. (a) The extracted operculate snail in the snake’s mouth. (b) The snail has been accurately repositioned. (c) The operculum being sliced off. (d) The soft parts of the snail being ingested while the operculum is discarded. A white and black arrow indicates the position of the operculum and the tip of the mandible, respectively

“When I first saw it, I had no idea what the snake was doing because it did not swallow its prey immediately,” Yosuke Kojima, a research fellow at Toho University and lead author of the paper told the Asahi Shimbun. “I’m surprised at how skillfully the snakes cut off only the parts that they can’t digest.”

The complete paper, “Mandibular sawing in a snail-eating snake,” can be read on the Nature.com website.