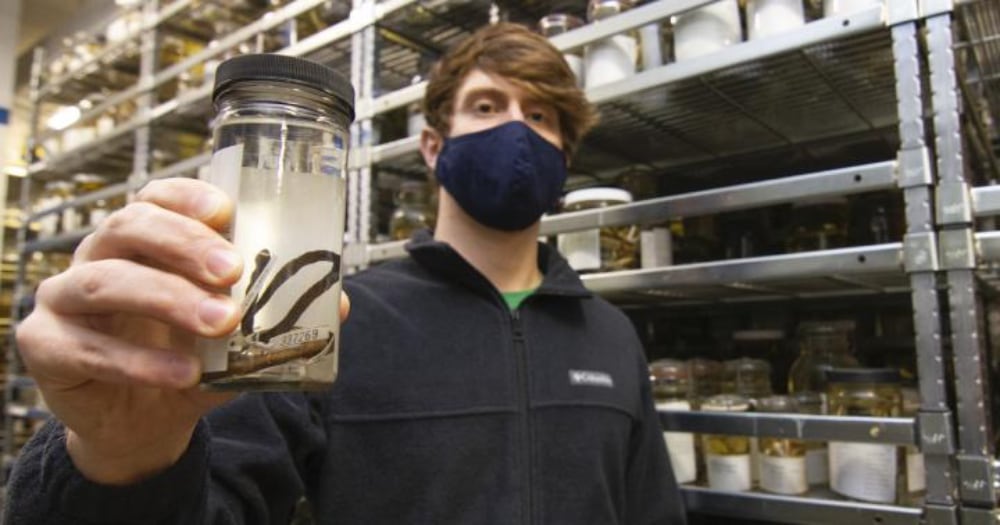 A subterranean snake that was collected in the Philippines in 2006 and 2007 was misidentified in the field and spent more than 10 years in the University of Kansas Biodiversity Institute and Natural History Museum before it was properly described, via molecular analysis, as an entirely new species and genus of snake, the Waray dwarf burrowing snake (Levitonius mirus), Cyclocoridae.

Jeff Weinell, a University of Kansas graduate research assistant at the Biodiversity Institute was studying the group of snakes within the Pseudorabdion genus, which is comprised of colubrid snakes endemic to the Philippines. Weinell took a special interest in the snake’s scales, which can help to determine the species, but it was the molecular analysis that changed everything.

That data showed that the subterranean snake was not in the Pseudorabdion genus at all.

“I was initially interested in studying the group of snakes that I thought it belonged to — or that other people thought it belonged to,” Weinell said. “This is when I first started my Ph.D. at KU. I was interested in collecting data on a lot of different snakes and finding out what I actually wanted to research. I knew this other group of small, burrowing snakes called Pseudorabdion — there are quite a few species in the Philippines — and I was interested in understanding the relationships among those snakes. So, I made a list of all the specimens we had in the museum of that group, and I started sequencing DNA for the tissues that were available.”

Weinell then sent one of the specimen to the University of Florida for a CT scan. The scan returned with some very peculiar findings. The snake had very few vertebrae, among the fewest of any snake in the world.

“The snake has among the fewest number of vertebrae of any snake species in the world, which is likely the result of miniaturization and an adaptation for spending most of its life underground,” Weinell said in a university statement released to the media.

Weinell wrote in his paper the need for more study of the fauna on both Samar and Leyte islands in the Philippines, because the species on these islands are indeed unique from that of the closest large island, Mindanao.

Levitonius mirus is about 172 mm in total length and is light brown to black in coloration with a single band of a light coloration on its head just behind the eyes.

The Waray dwarf burrowing snake was collected on both Samar and Leyte islands.

The complete research paper, “A New, Miniaturized Genus and Species of Snake (Cyclocoridae) from the Philippines,” can be read on the BioOne Journal website.