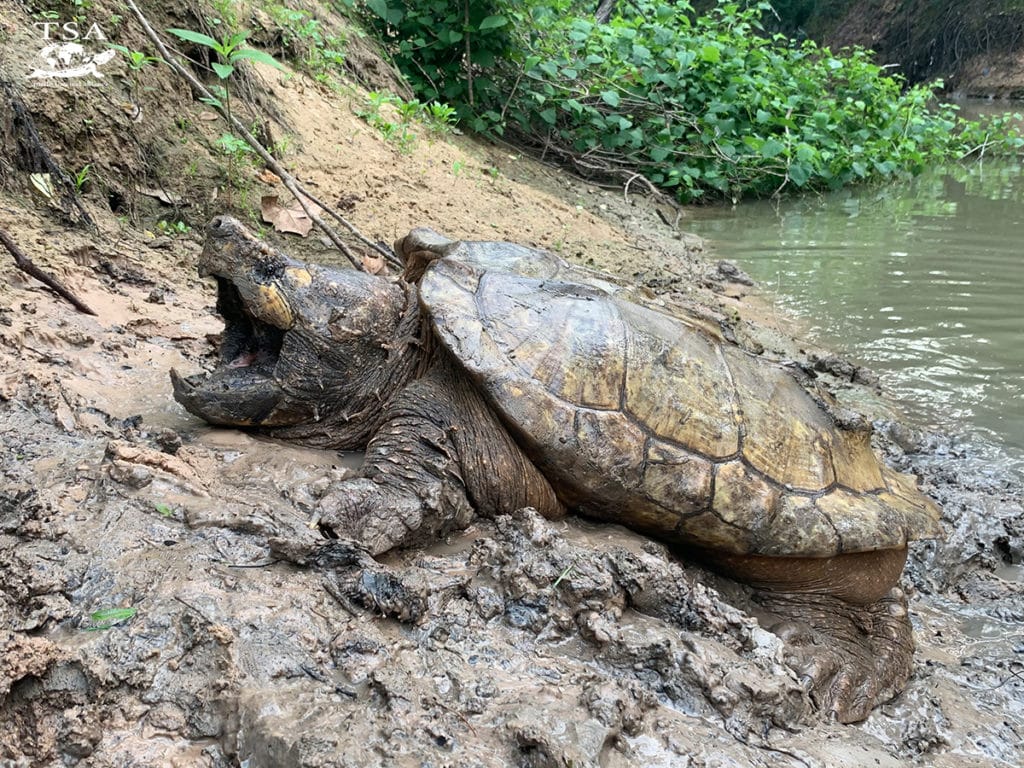 The Turtle Survival Alliance (TSA) announced last week that it has captured, tagged and released the 99th and 100th alligator snapping turtle (Macroch

The 99th turtle, a 131lb male is nicknamed J.J. Watt, after the defensive end football player with the Houston Texans. The 100th turtle is a 31 lb female, who represents what the TSA calls a milestone in the organization’s conservation initiative. The species is listed by the state as threatened.

Previously, it was thought that the species was no longer found in Harris County, until sightings of the species were reported over the years in Buffalo Bayou. The TSA’s North American Freshwater Turtle Research Group (TSA-NAFTRG) and Texas Parks and Wildlife Department confirmed the presence of the alligator snapping turtle in the bayou in 2016, which culminated last week with the tagging and releasing of the 99th and 100th species since the two entities began studying the species together in 2016.

“A thriving alligator snapping turtle population in the heart of the nation’s 4th largest city is a unique situation that should not be taken for granted,” Eric Munscher, Director of TSA-NAFTRG said in a statement released to the media. “To reach 100 marked alligator snapping turtles in one ecosystem is a rare feat. It speaks to the dedication of the research group carrying out the work, the integrity of the ecosystem being worked in, and the unique ecological role of this environment to Houston, and Texas.”

In addition to the findings of 100 individuals in the Buffalo Bayou ecosystem, the TSA-NAFTRG has determined a nearly 1:1 female to male ratio of the species in the bayou. The team has also found that three other bayou systems in Harris County are home to populations of alligator snapping turtles as well.

“Bayous and creeks play a major role in the incredible diversity of wildlife we have here in the Bayou City. The discovery of this robust population of alligator snapping turtles will go a long way with helping us bring awareness to the public on just how special the bayous are and how much they need to be protected,” Texas Parks and Wildlife Department Urban Biologist Kelly Norrid said.