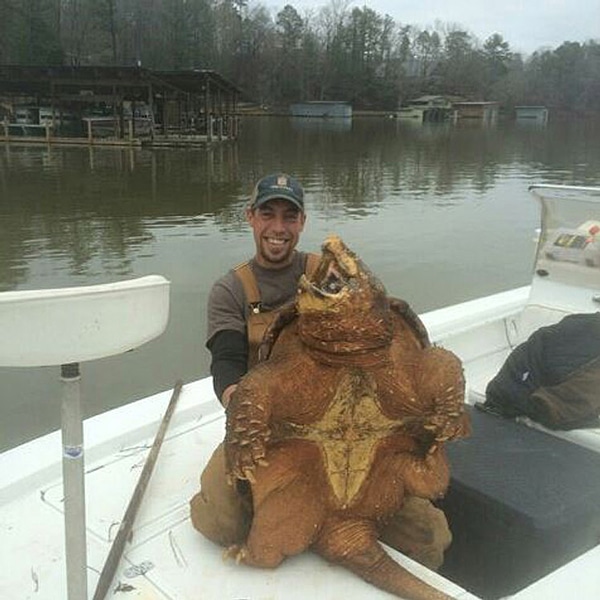 The turtle was caught and released by a man fishing for catfish.

A man fishing for catfish in Blue Creek, Alabama caught instead what he described as a 200 pound alligator snapping turtle (Macrochelys temminckii). Wes Prewett of Blue Creek Marina was soaking a shad when the giant chelonian grabbed the bait. Prewett initially thought that he was snagged on a log, but after several pulls on the rod, the turtle’s head broke the surface of the water.

“He towed the boat back and forth trying to get away, Prewett told the Clanton Advertiser. Realizing that he had caught a turtle, Prewett began to pull some more. The turtle surfaced and he grabbed its tail and brought him into the boat.

“My whole point of getting him into the boat was to get the hook loose from him,” Prewett said.

Once he removed the hook, and unsure how long an alligator snapping turtle could survive out of water, Prewett took his boat into the middle of the creek and released the turtle.

Alligator snapping turtles are the largest freshwater turtles based on weight. They are native to the southeastern United States, living in bodies of water that offer ample prey items, such as fish and dead fish, snakes, crayfish, aquatic plants and other turtles. They are considered endangered in Kentucky, Indiana, Illinois, and Missouri where they are protected by state law.