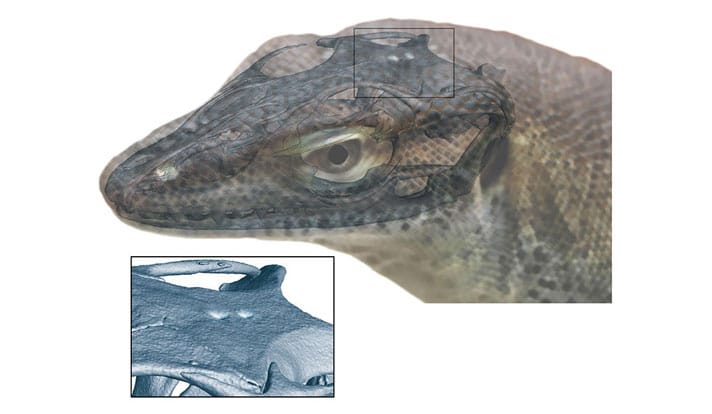 Researchers Discover Ancient Lizard With Four Eyes, But They're Not What You Think

The eyes weren't eyes in the traditional sense, used for seeing, but rather likely used to detect changes in such things as light.

Researchers at Yale University have discovered a second set of eyes on top of the head of Saniwa ensidens, a monitor lizard species that lived 50 million years ago. Now the eyes weren't eyes in the traditional sense, used for seeing, but rather likely used to detect changes in such things as light. 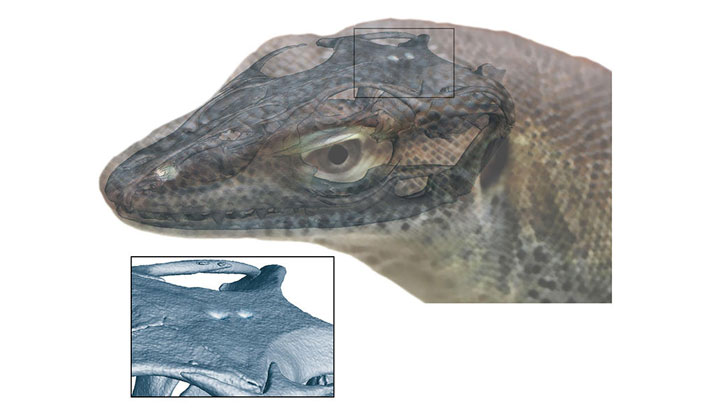 This image shows a reconstruction of Saniwa ensidens with a monitor lizard head. The third and fourth eyes are located on the top of the head. (Senckenberg/Andreas Lachmann).

“By discovering a four-eyed lizard, in which both the pineal and parapineal organs formed an eye on the top of the head, we could show that the lizard third eye really is different from the third eye of other vertebrates,” lead author Krister Smith said in a press release put out by the university.

Smith is a former Yale graduate student who is now with the Senckenberg Research Institute.

“It’s important to recognize that there’s nothing mystical about the pineal and parapineal organs,” Smith said. “They can sense light and play a role in the endocrine system. However, some of the abilities conferred by the pineal are really quite extraordinary. For instance, some lower vertebrates can sense the polarization of light with the third eye and use this to orient themselves geographically.”

Smith and Yale paleontologist Bhart-Anjan Bhullar used CT-scanning technology to study fossils of Saniwa ensidens that were collected in the 1870s.

The researchers said that their data details how "little is known about the evolutionary timing of the so-called 'lizard shift'" or the appearance of the third eye in lizards. Saniwa ensidens, according to the researchers, is the only known jawed vertebrate to have both a pineal and a parapineal eye.

“This tells us how easy it is, in terms of evolution, for a complex organ to self-assemble under certain circumstances,” Bhullar said. “Eyes are classically conceived of as these remarkably complex structures. In fact, the developing brain is just waiting to make eyes given the right signals.”

The complete paper, "The Only Known Jawed Vertebrate with Four Eyes and the Bauplan of the Pineal Complex" can be read on the Current Biology website.