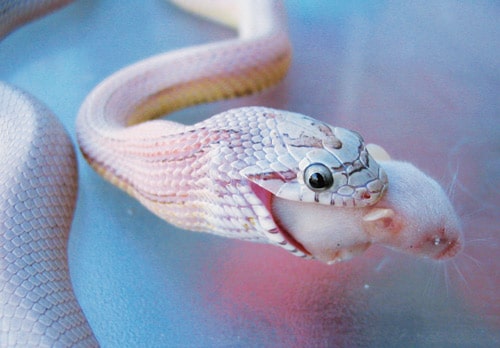 As someone who’s been breeding and selling corn snakes, kingsnakes and milk snakes to the public for more than 15 years, I often get asked an all-too-familiar question: “Why won’t my snake eat?” This question frequently appears on Internet forums as well.

First-time snakekeepers sometimes make beginner’s mistakes when caring for their charges. Although colubrid snakes are one of the easiest reptiles to keep — they don’t require special lighting, vitamin supplements or large enclosures — there are a few things to keep in mind when caring for them, and many relate in some way to a snake’s sense of security. 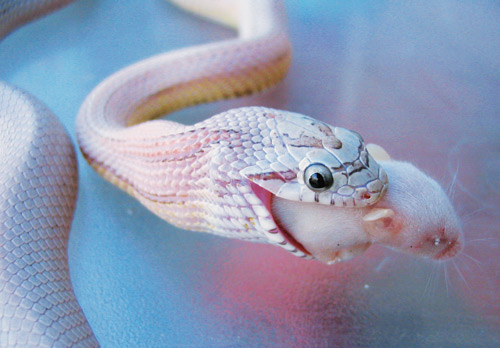 Food items should measure no more than the width of the thickest part of your snake.

Corn snakes, kingsnakes and milk snakes have been captive-bred for generations, and selective breeding has produced many eye-catching colors and patterns. Despite the nearly “domestic” qualities of popular pet store snakes, instinct still primarily guides their behavior. It’s important to keep this in mind. Young snakes have many predators in the wild, so they spend most of their time hiding. The need for a young snake to feel secure cannot be overstated.

A snake is even more concerned about its safety when it’s eating. It’s defenseless while swallowing food. It cannot bite or escape from a perceived predator very easily. Because it’s vulnerable, a feeding snake has an even greater need to feel secure.

Over time, I’ve developed a checklist of recommendations for owners who have nonfeeding snakes. Those who use the list have seen remarkable results; a number of nonfeeders have become good eaters. I thought sharing this information might help new snake owners start off on the right track, so here are 10 tried-and-true recommendations for getting your pet on a regular feeding regimen.

It takes snakes several days to get used to new environments. Some may eat moments after being unpacked, but it’s best to wait three to five days before feeding new arrivals. Offering food too soon could lead snakes to associate food with the uncertainty of being in a new, unfamiliar environment.

New snakekeepers often anticipate watching their snakes eat. Although this excitement may be justified, if you consider what the snake has been through before it slithered into your hands, it’s easy to see why a young, security-craving serpent may be reluctant to eat.

After a snake hatches, it may stay with the breeder until it eats two or three times. Then it’s shipped to you or a pet store, or taken to a reptile show. The stress of being put into a deli cup and transported for several hours (or even a couple of days) often impacts a young snake. Furthermore, when it’s placed in a new environment with unfamiliar sights and smells, its first inclination is to find a place where it can hide.

Do not make any changes in substrate or caging during the first few weeks. Have your snake enclosure set up and leave it as is (except for cleanings) for at least three months. Eventually a snake will begin to explore its environment, get to know the features of its home and feel comfortable enough to become a good feeder.

The most common reason baby snakes don’t eat is because their owners decide to set them up in a 10-gallon tank. Although some snakes do fine in this sort of setup, many do not.

Plastic flip-top shoeboxes and Kritter Keeper tanks are inexpensive and can serve as effective housing for the first 6 to 9 months of the snake’s life. Baby snakes feel more secure in these setups than in larger enclosures, and they will be more likely to eat.

Rodent-eating snakes also feel safer when they have a place to hide, so providing a hide area is beneficial to a snake’s well-being. A few of my snakes like wedging themselves under their newspaper substrate, which is underneath a hide box.

Several commercially available hide boxes — some looking like natural rock or wood — are available. A number of inexpensive plastic containers can also serve this purpose; all they need is a hole cut in them. I’ve used 8-ounce cream-cheese containers, plastic trays that come with microwaveable frozen foods, and plastic pipe caps. Plastic hide boxes are easy to clean, and that’s what makes them great.

Corn snakes, kingsnakes and milk snakes are most likely to come out in the early evening or at night, so lighting their enclosure is not only unnecessary, but it also may cause the animal stress. Because snakes cannot close their eyes, bright lighting can be particularly stressful to amelanistic (albino) snakes. These snakes are more sensitive to light due to their lack of black pigment, which protects a snake’s eyes and skin. Natural room lighting is all most snakes need.

Although the urge to watch your snake consume its first meal may be strong, it’s more important that the snake starts off on a regular feeding schedule.

Baby rodent-eating snakes feed most readily in the evening, so at first it’s best to place the food item in a snake’s cage in the evening and leave it in overnight without disturbing the snake. Once your pet has eaten several times, it may feel comfortable enough to allow you to observe its feeding behavior.

Find out what the pet store or breeder was feeding the snake. Most baby corn snakes, kingsnakes and milk snakes sold to the general public are fed pinkies, and these hairless baby mice come in a couple different sizes.

Be sure you can provide the snake with the food it’s accustomed to eating. As a general rule of thumb, offer a food item about the same width as the thickest part of the snake. Reluctant feeders often take smaller-than-normal food items more readily than bigger prey.

7. Hold Off on Handling

Although few snakes are as tame as captive-bred specimens raised for the pet industry, their docile nature does not mean they should be handled — at least not until they have adjusted to their new homes. Let your snake get into a feeding routine before you begin to handle it.

After your pet has eaten several times, begin handling it for 15 to 20 minutes once a week. Handling time and frequency can then be increased gradually over time. However, note that handling any snake that has recently eaten is not a good idea.

It is important that corn snakes have a hotspot in their enclosures where the temperature reaches the mid-80s (degrees Fahrenheit). As reptiles, snakes rely on outside sources to provide them with enough heat to properly function. If it is too cold, a snake often will not eat, and if it does eat, it may be too cold to digest its food.

A number of heating devices are on the market, but for small enclosures, heat tape or a heat pad are better options than a light bulb or ceramic heater, which tend to elevate the cage temperature to one uniform level. Snakes need both warm and cool areas in their enclosures to thermoregulate.

Also check the temperature range of your snake’s cage with a reliable thermometer. Some very nice temp guns that give accurate, instant temperature readings are currently on the market. Don’t guess on temperatures. I’ve heard of unfortunate incidents where new snakekeepers attempted to elevate their snakes’ cage temperature and ended up “cooking” their snakes.

9. Watch for the Shed

Most snakes will not eat while going through a shed. Tune in to your pet’s shed cycle, so you don’t offer it food at a time when it’s unlikely to eat.

Sometimes it’s hard to tell when a snake is in this cycle, especially if it is at the beginning or end. A snake’s skin becomes duller and it’s eyes become cloudy as it enters the cycle. After a few days of this, the eyes clear and the skin goes back to its normal color. Then, in one to four days, the snake sheds.

Baby snakes shed more often than adults, and they often appear most hungry right after shedding. Pay attention to your pet, so you can offer it food at the right time.

Most snakes are solitary by nature, so they do best when housed separately. Having more than one snake per enclosure causes stress, and snakes housed communally might not feed, or they might regurgitate their food. Snakes have unique personalities; each individual becomes easier to get to know when kept singly.

Follow these 10 tips and you’ll be headed down the right track. Most captive-bred snakes found in pet stores adjust to their surroundings quite well. Some even break one or more of the recommendations given here and appear to do just fine.

But why make their lives harder than they have to be? Allow some transition time for your snake to settle in to to its new environment. A relatively stress-free introduction to its new home is the best way to ensure that your new acquisition thrives. Corn snakes, kingsnakes and milk snakes can live for more than 20 years, and following these 10 tips will pay off with a well-adjusted, regularly feeding pet.