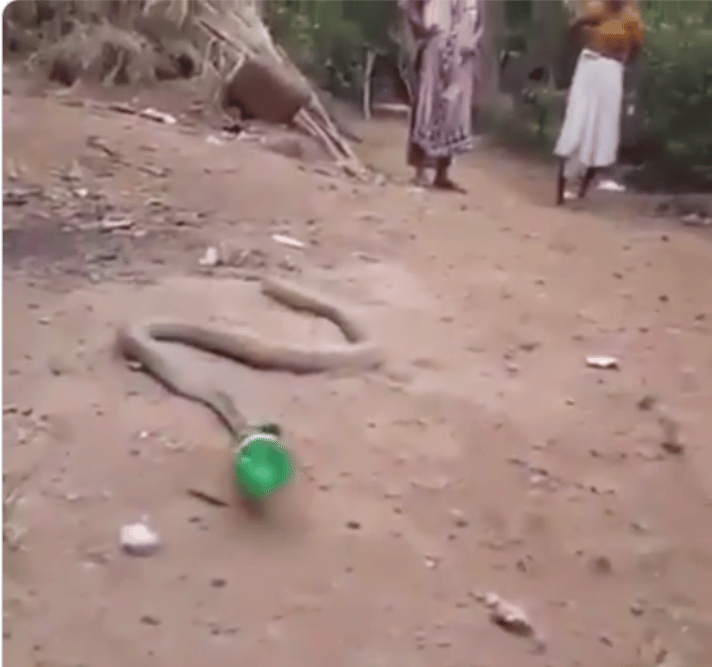 Hopefully the snake makes a full recovery after the ordeal, and people learn to manage their trash effectively.

A cobra in India swallowed a large plastic bottle and was able, with a bit of coaxing, to regurgitate the plastic trash.

When it comes to #plastic there is nothing called as throwing away. See how single use plastic like bottles effecting the wildlife & other species. Video may disturb you. pic.twitter.com/swnxAjbyCx

In a video posted on Twitter by Parveen Kaswan of the Indian Forest Service, the snake is seen writhing on the ground with the very large bottle in its belly. A man continues to stimulate the snake with a snake hook, rubbing the obstruction until the reptile regurgitates it.

Thank God…🙏 I hope that the cobra is safe and also that there's no internal injury caused.
Once again request all the people not to throw ANY KIND of #plasticwaste around in open, gardens, paths, streets, jungles… Anywhere… Please 🙏🙏

The man then hooks the snake and the video ends. Hopefully the cobra didn't suffer too much as it expended all that energy to expel the plastic trash from its belly.  According to a response to Kaswan's tweet, each plastic bottle has a message from the company that created it that it will accept the empty bottle back and return a small amount of money, but apparently the person who consumed what was in the bottle didn't return it or perhaps it ended up in the wild some other way. Either way, the cobra shouldn't have to eat plastic bottles or anything other than the live prey that they hunt. Hopefully people who consume products encased in plastic will find a way to recycle that plastic rather than just throw it away.

whose fault is it,if bottle is not given to waste pickers or disposed incorrectly? Company clarifies on each bottle that they shall accept plastic waste & pay for it. Each individual has a responsibility. Any inedible product has to be disposed properly. Lots of jobs are on stake

Indian cobras (Naja naja) can reach 4 to 7 feet in length and are known for the pale spots on the spread hood. The venom of this snake can cause respiratory failure, severe pain, swelling and tissue damage and eventually death if not treated quickly. The Indian cobra, one of the world's deadliest snakes, is native to Pakistan, India, Malaysia, and Sri Lanka.

Reptiles sometimes eat the strangest things. Here are a few more stories of what they shouldn't be eating.

Some Snakes Swallow The Darnest Things

Python Gets Honorable Mention in They Ate What? Vet Radiograph Contest