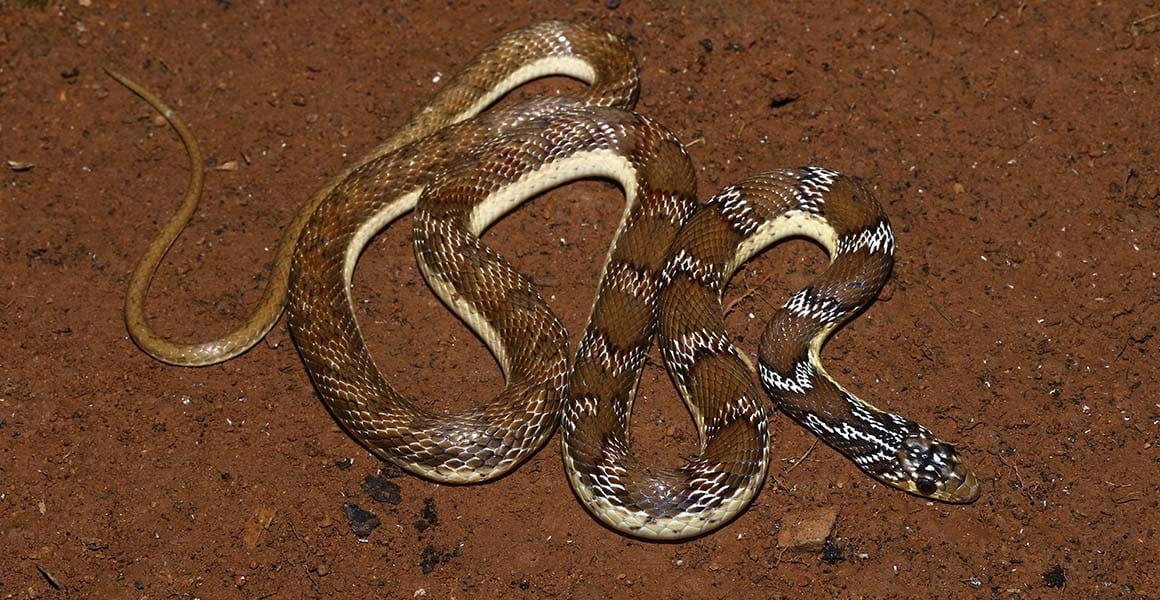 An Indian snake that was first collected in the mid-19th Century and described first via snake skins in 1796, and named the banded racer (Argyrogena f

An Indian snake that was first collected in the mid-19th Century and described first via snake skins in 1796, and named the banded racer (Argyrogena fasciolata), was in actuality a completely different species.

Herpetologist Dr. Deepak Veerappan of the Natural History Museum received a snake in 2016 that originated from India’s Tamil Nadu state in South India. The snake was distinctly different from snakes that were widely known in the area. Veerappan and his associates conducted genetic testing as well as a morphology assessment and seemed to determine that the snake was a new species. However, the snake was at the center of a mixup that was started some 200 years earlier.

The original banded racer is now known as Playceps plinii, and can be found throughout much of India ©Pratyush Mohapatra

“This new species isn’t like other new species that are described, because it has a very checkered past in terms of the literature,” Veerappan said in a statement released by the museum. “Since it is so widespread, many people have studied these snakes and given them lots of different names. But one of the biggest problems is that the names between two of the most common species of snakes found in India have been frequently confused.”

The snake at the center of the confusion, the banded racer (Argyrogena fasciolata) was originally mixed up by scientist Albert Günther who worked at the museum between 1875-1895, according to the museum. Veerappan then took a look at the original collections dating back to the time of Günther’s employment, looking at the skins that Günther used to determine the snake was a banded racer, and determined that the snakeskins weren’t of a banded racer but of an entirely new species.

The paintings from 185 years ago were so detailed that they allowed Deepak and his colleagues to use them in the description of the new species ©The Trustees of the Natural History Museum, London.

“It took a while for us to untwine this whole thing, It would have been impossible without the snake skins collected by Patrick Russel, who was a Scottish naturalist based on the east coast of India in the late 1700s, Veerappan said. “When I measured all of them we realized that they were all too small, and none of them matched the racer description.”

Veerappan then studied 1836 natural history paintings by Theodore Cantor, a Danish physician and zoologist. Those paintings were so intricate in their detail, that the number of scales on the snakes head were so accurate that they were used to differentiate the species.

The new species is now called Joseph’s racer, (Platyceps josephi). This snake has a more restricted range and is only found in the south-eastern state of Tamil Nadu.

“The Joseph’s racer is not particularly common,” Veerappan said.”We have given a recommendation based on their distribution and the data available that it is most likely a Vulnerable species because of its restricted distribution.”