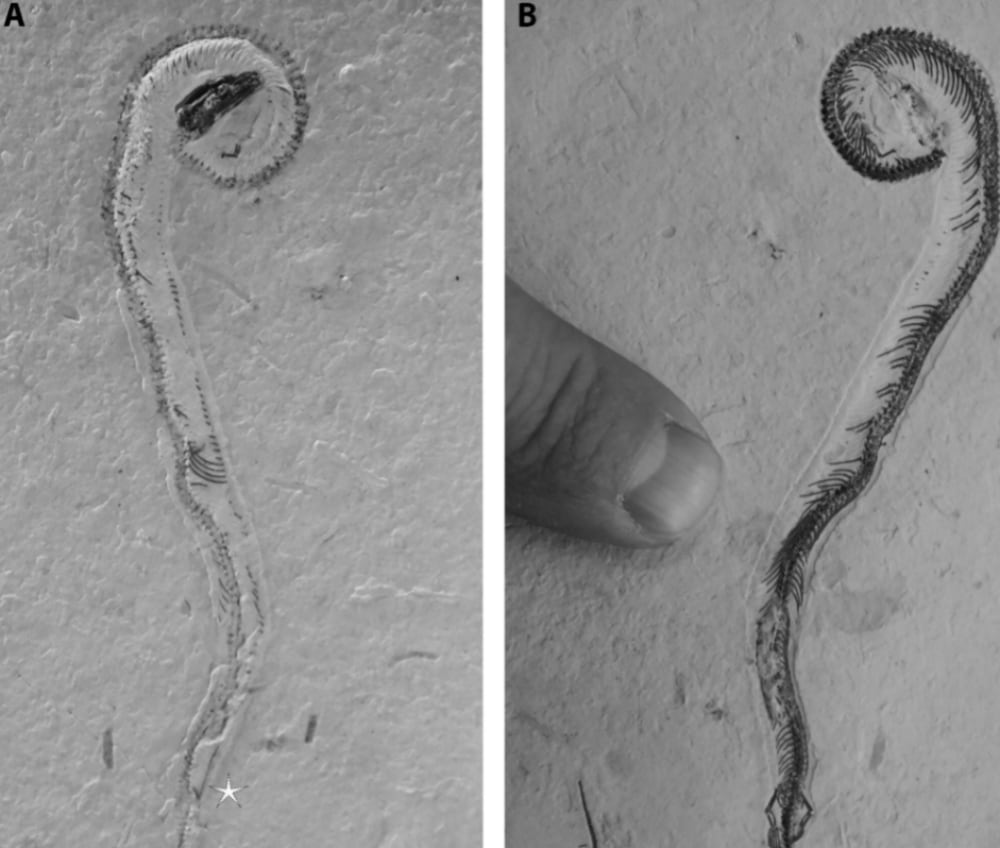 Tetrapodophis amplectus is not a snake: re-assessment of the osteology, phylogeny and functional morphology of an Early Cretaceous dolichosaurid lizard. Photo by Michael W. Caldwell et.al.

Tetrapodophis amplectus Is A Lizard And Not A Snake, Researchers Say

There is no evidence to support snake-like constricting behavior or macrostomy.

"We find that Tetrapodophis shows aquatic adaptations and there is no evidence to support constricting behavior or macrostomy."

In 2015, researchers with the University of Portsmouth and the University of Bath’s Milner Centre for Evolution in the United Kingdom, studied a peculiar fossil of a reptile that was snake-like yet had limbs, not unlike that of certain legless lizards. The researchers published a paper in the journal Science stating the reptile, Tetrapodophis amplectus, was indeed a snake and not a lizard.

Fast forward to 2021, and a second set of researchers examined the fossil and have concluded that Tetrapodophis amplectus is not a snake, but is a lizard. They published their findings in the Journal of Systematic Palaeontology.

“We assessed the relationships of Tetrapodophis using a revised version of the original morphological dataset, an independent morphological dataset, and these two datasets combined with molecular data. All four were analysed under parsimony and Bayesian inference and unambiguously recover Tetrapodophis as a dolichosaur. “We find that Tetrapodophis shows aquatic adaptations and there is no evidence to support constricting behavior or macrostomy,” the researchers wrote in their paper. Macrostomy is the capability to ingest entire prey, like most snakes do.

Caldwell’s team looked at the fossil and discuss the “evolutionary implications of body elongation and limb reduction and how it related to Tetrapodophis. They also present their “phylogenetic analyses of squamates focused on the sister-group relationships of Tetrapodophis.”

The researchers noted that the fossil is embroiled in controversy, as there are claims the fossil was taken illegally out of Brazil, and there was an investigation in 2015 to determine if the fossil was illegally taken from Brazil’s Crato Formation. They support the repatriation of the fossil back to Brazil.

“In closing, we want to reiterate that we completed this study of Tetrapodophis because the concept of Tetrapodophis cannot be removed or ignored in the scientific or popular literature, nor can it be removed from the milieu of general knowledge. There is no doubt that while the specimen of Tetrapodophis remains embroiled in controversy, it has not been ignored scientifically,” the reseearchers noted. “As such, Tetrapodophis as a concept should not remain mis-characterized merely because the provenance of the fossil is mired in controversy. In fact, science is imperilled if the original interpretation goes unchallenged, rises to common knowledge and becomes accepted as a fact in the absence of challenge. We consider it an ethical imperative to communicate the science arising from our restudy and to use that recharacterization as a tool in the continuing effort to repatriate the specimen to Brazil.”

The complete study, “Tetrapodophis amplectus is not a snake: re-assessment of the osteology, phylogeny and functional morphology of an Early Cretaceous dolichosaurid lizard” can be read on the Journal of Systematic Palaeontology website.