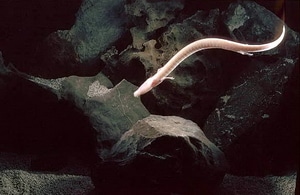 Proteus anguinus does not move very far during its lifetime, which can reach 100 years.

There is not a whole lot of information about olms (Proteus anguinus), Eastern European salamanders that live in caves. They are blind, they have no natural predators and their other senses; touch, taste, hearing and magnetic, are more highly developed to help compensate for their inability to see. 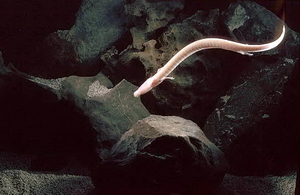 The olm is a cave dwelling amphibian found in Eastern Europe.

Scientists studying the amphibian have learned one other trait of this salamander; they don’t move a whole lot. In fact, researchers with Behavioural Ecology Group, Department of Systematic Zoology and Ecology, Eötvös Loránd University, Budapest, Hungary, and The Devon Karst Research Society, Library & Office, Plymouth, Devon, UK, published a paper last month detailing one individual of the species who did not move, at all, for seven years. That is right, in their paper published in the Journal of Zoology, researchers G. Balázs,  B. Lewarne, and  G. Herczeg say that one olm remained in the same spot for 2,569 days, or seven years and two weeks.

The researchers dived into the cave in 2010 and tagged seven olms, five of which were recaptured during the eight year study period.

"Interestingly, in three cases out of the latter four recaptures, the given individual was seen in the exact same spot as previously."

The longest distance an olm moved was 38 meters during a 230 day period, while the majority of recaptured salamanders moved less than 10 meters in several years.

Olms are aquatic salamanders and are the only cave-dwelling salamander in Europe and the only salamander in its genus. It grows to 8-12 inches in length and moves about the water in an eel-like fashion. Olms have 12 year breeding cycles and it is believed they can live 100 years.

The complete research paper, "Extreme site fidelity of the olm (Proteus anguinus) revealed by a long‐term capture–mark–recapture study" can be found on the Journal of Zoology website.