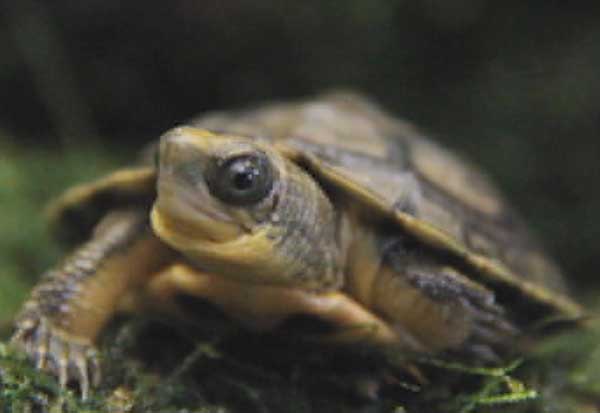 "We began working with this species in November of 2002," Don Boyer, curator of herpetology at WCS’s Bronx Zoo told ReptileChannel. "Last year we got several clutches of infertile eggs. This year we got two clutches of eggs – five in all. We successfully hatched all five eggs."

To get the Chinese yellow-headed box turtle to breed, zoo personnel induced hibernation, which is required for this species to breed, and is not uncommon in turtles. Ornate box turtles and Blanding's turtles also breed after hibernation.

Breeding the yellow-headed box turtle was an especially challenging task given the aggressive nature of the female.

"Overall husbandry is important," Boyer said. "The turtles need to be in good body condition to successfully reproduce. The females can be very aggressive when attempting to breed them. The keepers supervise the introductions and watch for courtship and copulation. If the turtles are not interested or too aggressive, the pair is split up and we try again on a different day. Once gravid we keep an eye on the females and place them in a special enclosure for nesting. There is very little disturbance and there is a very large well planted nest area. We continue to monitor the females so that we can recover eggs after oviposition and place them in the incubator. The young turtles are very small (6-9 grams) and quite shy and need a quiet, well planted enclosure with lot of hiding places in shallow water. Keepers entice the hatchlings to begin feeding on small live prey."

In the wild, Boyer said that the Chinese yellow-headed box turtle feeds on a variety of riparian plants and invertebrates such as insects, snails and worms, as well as small fish, frogs, and tadpoles. At the zoo, they are fed worms, insects, pinky mice, chicken, beef, and greens and fruits.

The hatchlings are part of a WCS strategy to save from extinction some of the most critically endangered turtle species. The WCS plan includes breeding and reintroducing turtles into the wild as well as developing what are called assurance colonies, which are colonies of turtles in zoos and aquariums to ensure genetic diversity. The plan also calls for field work on the species to devise ways to help the turtle to survive in its native habitat.

Currently, the only other formal institution in which these turtles are found in captivity is at the International Center for Turtle Conservation at the Munster Zoo in Germany. This facility has the largest captive group of Chinese yellow-headed box turtles. The private sector is also attempting to breed this species, Boyer said. "Eventually we would like to expand the program in the US and work with other zoos," he said.

The Chinese yellow-headed box turtle, once abundant in freshwater streams of Anhui province in eastern China has experienced severe population declines due to human consumption, pollution, habitat loss, "medicinal" use, and the pet trade.

The Wildlife Conservation Society says that more than half of the world's 330 species of freshwater turtles and tortoises are threatened with extinction due to such factors as illegal trade and habitat loss. It says that most of the turtle trade is driven in large part by demand for these animals in China.