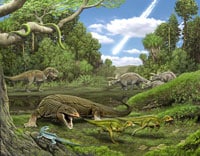 Obamadon gracilis disappeared after an asteroid struck the earth 65 million years ago.

Obamadon gracilis, a small lizard that went extinct more than 65 million years ago, and was named after President Obama, is one of many reptiles that were killed off by an asteroid that struck the earth in the age of the dinosaurs. Yale Paleontologist Nicholas Longrich, the lead author of the paper "Mass Extinction of Lizards and Snakes at the Cretaceous-Paleogene Boundary," co-authors Bhart-Anjan S. Bhullar, a Harvard University doctoral student in organismic and evolutionary biology, and Jacques A. Gauthier, professor of geology and geophysics at Yale and curator of vertebrate paleontology and vertebrate zoology, claim in their paper that the asteroid that struck the earth on the Yucatan Peninsula 65.5 million years ago had a larger detrimental effect on snake and lizard species than was previous thought. 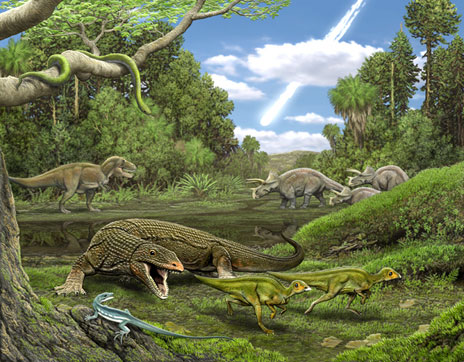 Foreground, the carnivorous lizard Palaeosaniwa stalks a pair of hatchling Edmontosaurus as the snake Cerberophis and the lizard Obamadon look on. In the background, an encounter between T. rex and Triceratops. The sky above shows the asteroid trail as it hurtles toward earth.

According to a press release put out by Yale University, the scientists say as much as 83 percent of all snake and lizard species died as a result of the asteroid. The researchers based their results on detailed examinations of snake and lizard fossils from western North America, from New Mexico to Alberta, Canada. They studied 21 previously described species and in the process identified nine new species of lizards and snakes. In their study, they found that a wide range of reptiles lived during the end of the age of the dinosaur, from tiny lizards to snakes the size of boa constrictors to plant eating lizards that are remarkably similar to modern day iguanas. They also found carnivorous lizards in what is now Montana, with some species growing up to six feet in length.

The lizard family Polyglyphanodontia, which comprised approximately 40 percent of all of the lizards that were living in North America prior to the asteroid strike, was one of the most diverse lizard families that were killed off by the strike, the researchers said. Within that family was an unnamed species that the researchers called Obamadon gracilis, or slender tooth, named after the current U.S. president. The lizard was probably less than a foot long and probably fed on insects. The scientists conclude, based on the jawbones of two specimens, that the lizard had tall and slender teeth with large central cusps that were separated from the accessory cusps by lingual grooves.

Said co-author Bhart-Anjan S. Bhullar: "One of the most important innovations in this work is that we were able to precisely reconstruct the relationships of extinct reptiles from very fragmentary jaw material. This had tacitly been thought impossible for creatures other than mammals. Our study then becomes the pilot for a wave of inquiry using neglected fossils and underscores the importance of museums like the Yale Peabody as archives of primary data on evolution — data that yield richer insights with each new era of scientific investigation."