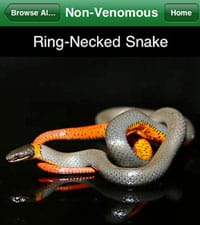 Texas herper Jeremy Weaver has released an Apple iOS application for the iPhone that enables users to easily identify any snake species in the state of Texas. Called TX Snakes 1.1 for iOS, the application offers the capability to search in any of the 254 Texas counties, so you can easily determine what kind of snake that might be curled up in your back yard, near the woodshed, or slithering along the bike path. In addition, you can search by region, county, snake pattern, and venomous or non venomous categories.

Each species includes a photograph of the reptile as well as other identifying information to help identify the animal. Although the application focuses on the state of Texas, the reptiles in which it chronicles know no boundaries, so close to 2/3 of the reptiles and amphibians found in the central and western United States are also included.

Weaver, who is working toward his Ph.D in Biology at Texas Tech University took an interest in iPhone programming and melded it with his interest in herpetology to develop TX Snakes, which took about six months to build. "After review of the other reptile apps available I noticed that they were mostly written from a standpoint of providing information but didn't really focus on identification," said Weaver.  "So I thought it would be nice to build an app that was useful in identifying snakes and so any user could pick it up and view the specific snakes found in their state, region, and county as well as provide a search function to narrow down the possible results. I live in Texas and herp in Texas so this state was an easy choice to start.  Since then I've built a companion app for the snakes of Oklahoma called OK Snakes and am close to finishing a snakes of Kansas app that will likely be called KS Snakes," Weaver said.

TX Snakes 1.1 requires an iPhone, iPod touch, or iPad running iOS 3.2.1 or later and 9.1MB free storage space. It is priced at $0.99 and is available via Apple's App Store in the reference category.