Snakebite Treatment In A Nasal Spray? It Could Happen

A University of California, San Francisco medical doctor who hopes to limit the number of venomous snakebite deaths around the world has come across a way to produce an inexpensive and portable snakebite treatment that uses nasal sprays instead of the more cumbersome needles used to administer antivenom. According to NBCNews, Dr. Matt Lewin has performed a trial run on a treatment that uses neostigmine, a drug already in use to treat snakebites, but in a spray form that is portable and doesn't need refrigeration or needles to administer. 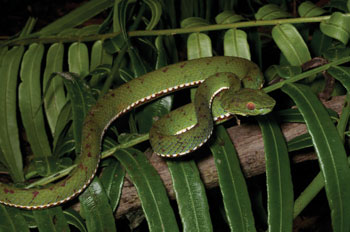 Lewin, director of the Center for Exploration and Travel Health at the California Academy of Sciences is currently in the early stages of his research, but so far things are looking positive. He has authored a paper in the journal Clinical Case Reports that describes his research using one volunteer, a 45-year-old man who was chemically paralyzed in the lab and then given Lewin's antidote. In 20 minutes, the paper said, the man's symptoms were reversed. The report said that a colleague of Lewin used the nasal spray to treat a woman in India who was bit by a krait. She had already gone through a full course of antivenom treatment, and after receiving a course of the neostigmine nasal spray, her paralysis was reversed in just 30 minutes, and within two weeks, was conducting her normal daily routine.

According to the report, Lewin came up with the idea for a portable snakebite solution as he was getting ready for a trip to the Philippines, which is home to four species of cobra (Naja sumatrana, Ophiophagus hannah, Naja samarensis, Naja philippinensis) four pit vipers (Tropidolaemus wagleri,Trimeresurus f. mcgregori,Trimeresurus f. halieus, and Trimeresurus flavomaculatus) four species of coral snake (Maticora intestinalis bilineata, Calliophis spp., Maticora spp., and four species of sea snake (Pelamis platurus, Hydrophis semperi, Astrotia stokesii, Laticauda colubrina).

What are the world's most deadly venomous snakes?

Scared of Snakes? There May be a Gene For That

He realized that there was no portable solution to treat snakebite in the wild. Lewin knew that the World Health Organization recommends neostigmine as the drug of choice to treat snake bite, but it is administered intravenously. He was also was aware that the drug is used in nasal sprays to treat the neuromuscular disease myasthenia gravis.  He created a neostigmine recipe but for administering via nasal spray and then set out to test his concoction on the volunteer after the review board signed off on his experiment. The man was given an injection of mivacurium, which mimics the effects of envenomation. Before the effects became too severe (respiratory distress, weakened eyelids) the man was given the neostigmine nasal spray, which was successful in treating the man. The experiment led to more research funding and Lewin hopes to conduct drug trials in mice in more traditional research. If Lewin's nasal spray works out, he thinks that the solution would could help immensely in India and other regions of the world that have snakes with paralyzing venom.