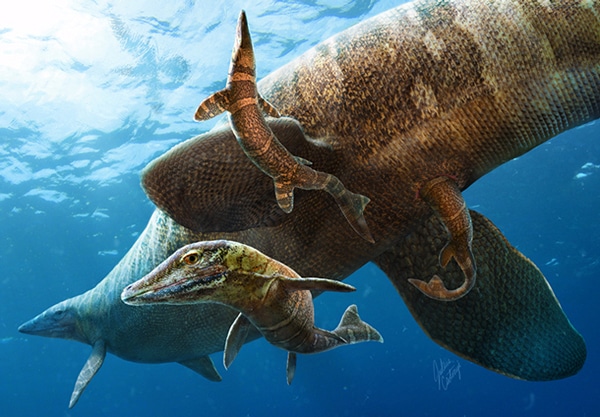 Mosasaurs (Clidastes liodontus), massive marine lizards that dominated the world’s oceans during the Late Cretaceous period are some of the most

Mosasaurs (Clidastes liodontus), massive marine lizards that dominated the world’s oceans during the Late Cretaceous period are some of the most highly studied Mesozoic vertebrate animals and were previously thought to have laid eggs on land in sand, like sea turtles. However, that notion has been challenged with a new study by researchers with Yale University and the University of Toronto.

Fossil Of Lizard That Ruled The World's Oceans Discovered In Jordan 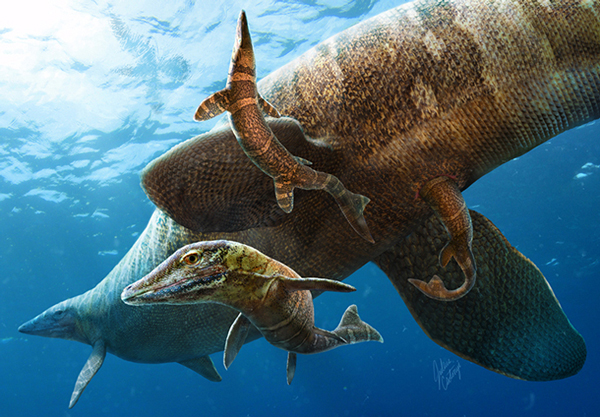 Artist's interpretation of this study's principal conclusions, illustrating Clidastes liodontus giving live birth in an open pelagic setting ~85 million years ago, beneath the shadow of the toothed stem bird Ichthyornis.

Daniel Field, lead researcher on the study told the Yale News that he and several colleagues found some cataloged fossils at the Yale Peabody Museum that were collected more than 100 years ago and were thought to have been ancient marine birds. They determined, based on the jaws and teeth of the specimens that the fossils, which were found in deposits in the open ocean, were mosasaurs. Field and his colleagues believe that the physical characteristics of mosasaurs, including the streamlined body, flippers, anteriorly deepened rib cage, lack of a sacral attachment for the pelvis as well as the presence of a  fish-like hypocercal tail limited these reptiles to the ocean.

They say that these findings dispel the notion that mosasaurs laid eggs on beaches and didn’t live in sheltered nearshore nurseries as previously thought.
The full paper can be read on Palaeontology.