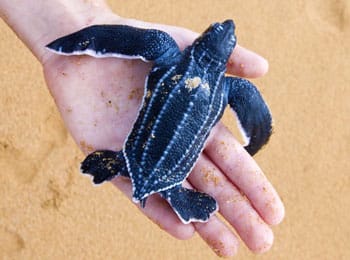 Singer Island Fla. Sea Walls Could Be In Violation Of Endangered Species Act

The United States Fish and Wildlife Service has raised concerns about a proposed sea wall on Singer Island in Palm Beach County Fla., and Gary Appleson of the Sea Turtle Conservancy says that the walling off of Singer Island without a plan to mitigate for the harm to sea turtle nesting habitat would be a violation of the Endangered Species Act.

The USFWS believes that the state is issuing too many permits for new seawalls on the island to protect beachfront condominiums. The island  is a prime nesting spot for endangered sea turtles such as greens, loggerheads, and leatherbacks. According to a report in the Sun Sentinel, six additional seawalls are planned for construction after turtle nesting season ends in November, with more expected, resulting in a mile of walls. This would essentially block large swaths of beach where sea turtles nest.

Loggerhead Sea Turtle Nest Numbers Up Across State of Florida

Irene Destroys Sea Turtle Nests up and Down Florida's Coast

The island has been a victim to overdevelopment for decades, according to the report. First, developers built roads and homes on top of what were beach sand dunes, which accelerated erosion on the state's shoreline, due to the inability of the dunes to replenish beaches with sand. The addition of man made inlets has further compounded the problem by prohibiting the natural distribution of sand along the shore.

According to the report, Hurricane Sandy's devastating effects along the country's northeast coastline resulted in a flurry of new permits to build seawalls to protect residential areas on Singer Island. The Florida Department of Environmental Protection has been issuing permits to build but the USFWS has expressed concerns about the size of some of the seawalls in the proposals as well as the proximity of the walls to the ocean. In a letter to the Florida Department of Environmental Protection, USFWS noted that building the walls in such a way could cause the state of Florida as well as the property owners to be in violation of the federal Endangered Species Act. Florida Department of Environmental Protection is working on a response to the USFWS letter but told the Sun Sentinel that its seawall permits comply with state code.

The county has not yet come up with a solution to the beach erosion issue despite pleas from property owners in Palm Beach County. The county commission opposed a 2012 plan to install beach groins that are said to help stop beach erosion, and a 2011 plan to build offshore breakwaters was also stopped due to objections to the project on environmental grounds as well as the high cost of construction. Nonetheless, residents of the county know that a solution must be found because beach erosion is as much a tourism issue as it is a property owners issue, because there can be no Palm Beach without the beach, said Bob Gonstead, president of the Singer Island Civic Association.