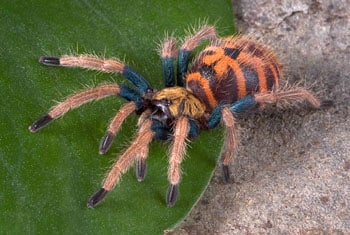 Invertebrate Column In REPTILES Magazine: Yes Or No?

Let the editor know what you think.

Tarantulas, scorpions, mantids, hermit crabs…a variety of these and other invertebrates are often seen for sale in exotic pet shops and at reptile expos.

Several years ago, REPTILES contained a column called "Spineless Wonders," which was about invertebrates. Some readers loved "Spineless Wonders." The majority, however, did not, and these readers often voiced the same opinion: "The name of the magazine is REPTILES. Stop taking up space in my reptile magazine with a column about spiders, etc.!"

In recent years, though, it seems the invertebrate presence at reptile shows has been growing. We're used to seeing deli cups that contain geckos, snakes and other herps, but alongside many of those we're also seeing deli cups containing spiders and other invertebrates. So we're wondering whether or not increasing numbers of herpers are keeping such animals. Tarantulas and their kin are definitely interesting creatures, and they have no real presence in any regularly available magazine being printed these days. Perhaps it's time for REPTILES to again pick up that slack.

We want to know what you think, especially if you are a REPTILES subscriber. Whether or not you keep inverts yourself, would you be interested in reading an invertebrate column in the magazine? If you're inclined to say no, what if rather than every month it was a bimonthly or quarterly column? Or are you firm in your belief that REPTILES magazine is no place for scorpions, spiders and other inverts?

Please take a moment to submit a comment below and let us know your opinion. Thanks very much.