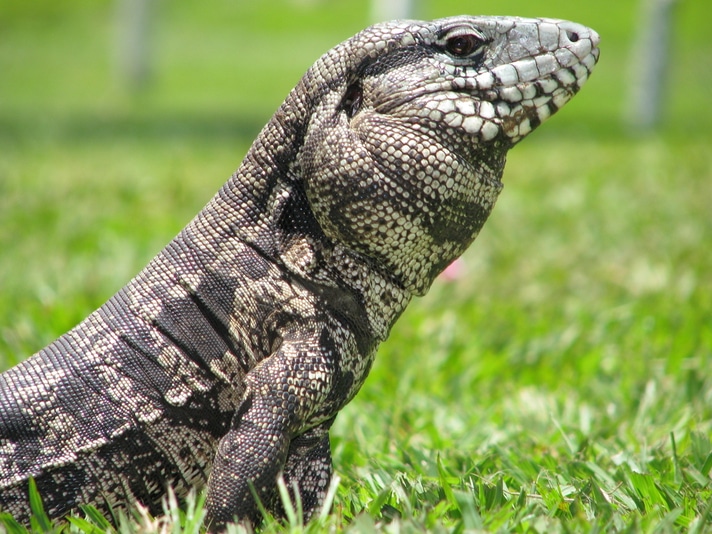 More than 100 lizards seen in the wild in Hillsborough County.

The Tampa Bay, Fla. area is now considered the third locality in Florida where tegu lizards are breeding in the wild, according to the Florida Fish and Wildlife Conservation Commission, as more than 100 black and white tegus (Tupinambis merianae) have been seen in the wild in Hillsborough County. The other two counties in Florida where the lizard has established itself in the wild include Polk County and Miami-Dade County.

"Certainly we have a lot to learn," Steven Johnson, with the University of Florida's Department of Wildlife Ecology and Conservation told the Tampa Tribune. "But there is potential for impacts to native species by direct predation from tegus.”They have a broad diet and consume fruits, seeds, insects, snails, as well as small vertebrates, including reptile and bird eggs," he said. "They are a particular threat to imperiled species such as gopher tortoises and scrub jays."  Johnson said that people need to research an exotic animal before they acquire it and must be responsible pet owners by never releasing unwanted animals into the wild.

Wildlife officials speculate that the tegus now found in the wild in Florida were formerly pets that escaped their enclosure or were released by their owners.  Last year, a breeder with a Class III license to sell them abandoned more than 30 tegus in his old yard in Panama City, Fla. The  Florida Fish and Wildlife Conservation Commission captured 33 of the reptiles.

Wildlife officials advise that if you see a tegu in the wild not to try and approach it or capture it but rather to take down the location you observed the reptile and take a photo if possible, and call the state's exotic species hotline at  1-888-483-4681.

Black and white tegus are about 2 1/2 to 4 feet in length and can live up to 20 years. They are native to Central and South America and look like monitor lizards. Although not overly aggressive, tegus do have sharp teeth and strong jaws and claws.