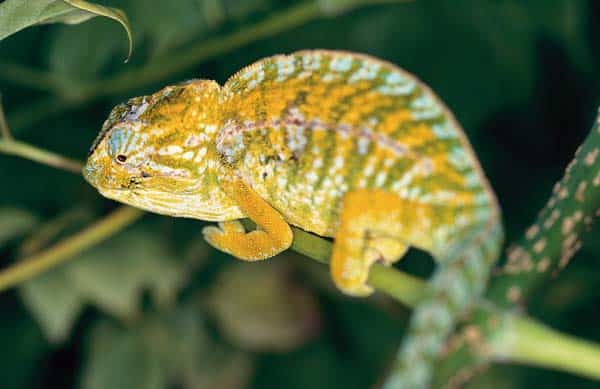 One of the things that attract people to chameleons is their ability to change color. Contrary to popular belief, chameleons do not change color to match the exact color of their surroundings. Instead, their color changes reflect fluctuations in temperature and emotion, and these remarkably swift changes are believed to occur from a shift in hormones or a reaction by the nervous system.

Carpet chameleons are the most common and plentiful species of chameleon found on Madagascar, which is off the coast of Africa. They live in varied habitats and favor humid areas in the central to southern regions, where most of the native population can be found. Carpet chameleons have adapted to mountains, deserts and rain forest habitats, but they seem to be most numerous where there is ample humidity. There is little question that within reason most chameleons can adapt to varying temperatures, humidity and dryness, but the fact remains that they will only adjust to some semblance of their native environment. Adaptability does not mean lizardkeepers should push the extreme limits of the chameleon’s environmental needs. All subspecies of Furcifer lateralis are generally collected where humidity averages 70 percent or higher. 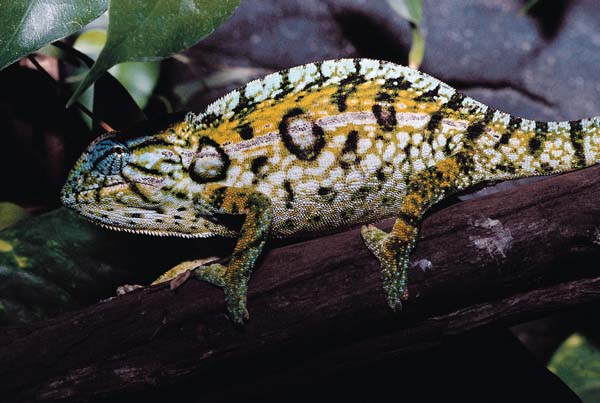 A male Furcifer lateralis lateralis (pictured) is less ornate than a female of the subspecies..

Carpet chameleons (Furcifer [Chamaeleo] lateralis ssp.) are one of these colorful chameleons. According to the book Chameleons by R.D. Bartlett, the common name stems from the patterns and colors gravid females display, which might remind people of an Oriental carpet. They are also often called jeweled chameleons in the pet trade. Because the common names of chameleons can get confusing, I prefer to use scientific names. Although there is some debate as to whether Furcifer lateralis has subspecies, I will refer to subspecies here as a way to distinguish between types. I have worked with two: Furcifer lateralis major and F. l. lateralis.

Furcifer l. lateralis measures 6 to 10 inches in overall length, and it’s a smaller, more common subspecies. Its brilliant and interesting color patterns vary greatly between individuals. Females are uncharacteristically more ornate than males, and pet owners often prefer them for this reason. Generally displaying green hues with a white stripe while resting, males display bright green with yellow or white highlights when fully colored. Sometimes shades of blue are also present. Females are often dark-red to brown at rest with white or yellow highlights. When fully colored, they display black with brilliant yellow, orange, blue and often red spots. 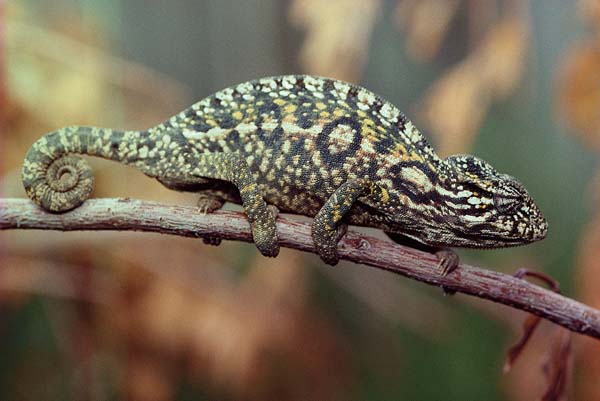 The colors and patterns on this female Furcifer lateralis lateralis might remind people of an Oriental carpet.

Although one of the most attractive and available chameleons on the market, Furcifer l. lateralis has a shorter life compared to other easily attainable species in pet stores, such as panther chameleons (Furcifer pardalis) or veiled chameleons (Chamaeleo calyptratus). The upside of Furcifer l. lateralis is that females usually produce 15 to 20 eggs per clutch with a high to perfect hatch rate every six to eight weeks from the time of sexual maturity until they die.

Wild-caught imports of Furcifer l. lateralis can be found quite often in pet stores due to the number and wide distribution of this particular subspecies. Be warned, however, that purchasing an adult carpet chameleon may not have favorable results. They may not live long if they are purchased too old or if there is a parasite issue.

Although rarer in pet stores or at trade shows, Furcifer lateralis major, in my experience, has proven to be a hardier animal than F. l. lateralis. These chameleons grow from 10 to 14 inches in overall length. Females at rest are usually green and tan. When fully colored, they display deep green and tan with bright-purple to lavender spots. Sometimes blue highlights are present. Males are not as flashy, but they do have an aesthetically pleasing coloration with brighter green and yellow bursts of color. 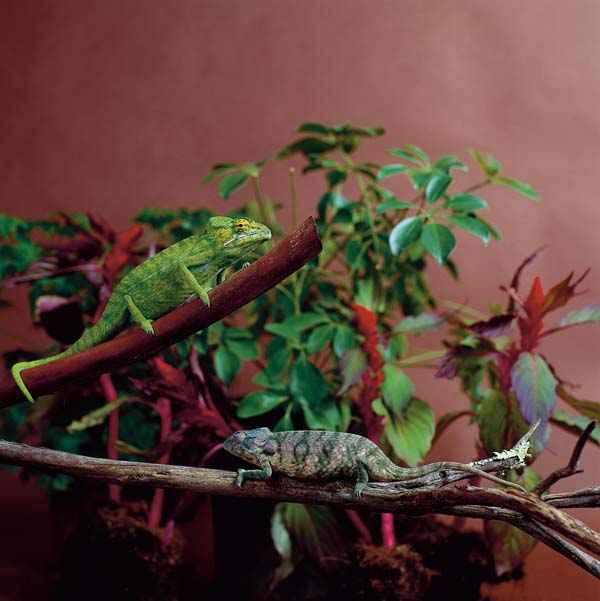 Simulate a chameleon’s natural environment as close as possible. Carpet chameleons like to bask in the sun, so give them the opportunity to do so, but make sure they have a shady retreat. Never leave a chameleon in direct sunlight without giving it the opportunity of shade. Otherwise they might get too warm.

Also watch them for signs of overheating while in direct sunlight. Chameleons showing dark green or solid black are basking. Blanching, turning very light green, yellow or even white, indicates that the animal should be removed from the sun and given shade and water. A trip to the shower for “deep hydration,” a watering method I discuss later, is a good idea for any chameleon found overheated, blanched or panting with an open mouth.

Although I believe chameleons should be in natural sunlight as much as possible, an indoor environment is fine for most animals. They require a full-spectrum fluorescent light and a heat dome light. I position the dome light so the highest point the chameleon can reach is no more than 90 degrees Fahrenheit. Ambient temperatures can range from 70 to 80 degrees. Chameleons should not be able to touch bulbs, or burns can result.

Also provide nontoxic plants (such as a Ficus benjamina), sticks of various sizes and vines, so they may feel secure. Chameleons become stressed when they see other chameleons, even if they see one across the room. If you notice a chameleon stressing — changing to gravid or unreceptive colors, hissing or puffing up for no apparent reason — it may see its reflection or have view of a chameleon in another cage.

Carpet chameleons do well on a diet of medium-sized crickets, flies and other small insects. Offer five to six gut-loaded feeder insects per meal. I generally feed my chameleons twice a week, and I allow the feeder insects to roam the cage freely. This forces chameleons to use their hunting abilities and keep their tongues strong. Dish feeding is also an option, but there is a higher risk of tongue damage when using a dish.

A chameleon’s tongue is not really sticky. It’s hollow and composed of three main elements: accelerator muscles, retractor muscles and the sticky tip, which is more like a toilet plunger. The tip hits prey hard and creates suction around it before the chameleon retracts it. Because of this suction, the tip can get stuck on a feeder dish. Irreversible damage can result. Sometimes the tongue no longer retracts, and it atrophies or even causes death if the chameleon cannot be taught to be hand-fed. 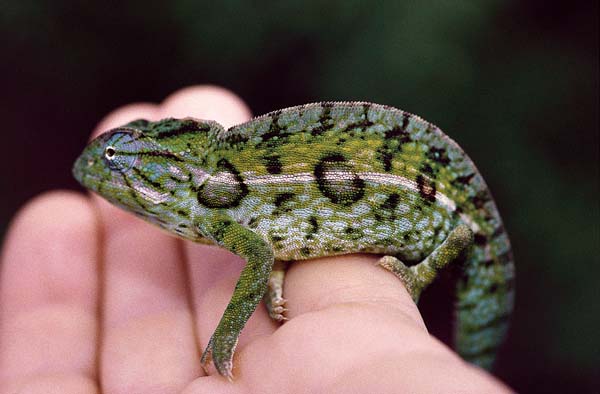 Furcifer lateralis lateralis, such as this male, is the more common subspecies in the pet trade. It can measure 6 to 10 inches long.

Supplement nonbreeding chameleons every third feeding with calcium, vitamins and minerals. I use Sticky Tongue Farms Miner-All and Vit-All.

Breeding animals especially need to be healthy, well-fed and filled out. A thin, undernourished animal might mate, but the number and health of offspring often reflect a female’s malnourishment. Overly nourished animals also should not be bred. Females too fat often overload with an inordinate number of fertile eggs. I have seen young, overweight females develop so many eggs that they were unable to expel them. They became egg-bound and died. Females full of eggs usually do not have much room for food intake, and this can also be a problem.

Egg production takes a lot out of a female, so she must be adequately nourished with proper calcium, vitamins and minerals to produce viable eggs that in turn produce strong, healthy young. I use Miner-All and Vit-All. During internal egg development, a female should be fed a varied diet of high-quality insects, such as crickets, cockroaches, flies and mealworms. Use supplements every other feeding. Without this nutrition, females and their young suffer and often die.

Supply water to your chameleon twice daily in the form of a mist, spray or dripper. I use tap water in a Hudson sprayer to mist my enclosures. A humidifier also helps to keep humidity in check. Do yourself a favor and get the more expensive one with the auto shut-off. I use only distilled water in the humidifier. This keeps minerals from building up and causing the misting nebulizer to malfunction. Make sure to wet the chameleon’s body as well as the plants in the enclosure.

I have had much better luck breeding and maintaining healthier captive animals with a humidity higher than 70 percent. If humidity in the enclosure drops below 70 percent, a weekly deep hydration is necessary. Even with a humidifier present I prefer this shower method. Gently place the chameleon on a clothes-drying rack or plant in the shower stall. Turn the shower on so a light, lukewarm rain falls on the chameleon for 30 to 60 minutes. In drier climates the shower method may be used twice a week or more. Outdoor enclosures can be fitted with automatic mister systems, which reduce the risk of dehydration and make watering easier for the lizardkeeper.

Chameleon owners need to be prepared to spend not only time on this creature but also money. The lizard is normally the most inexpensive part of startup costs. Hidden costs include parasite checks, possible treatment, follow-up fecal checks, possible blood work, tests for bacterial infections and other expenses. 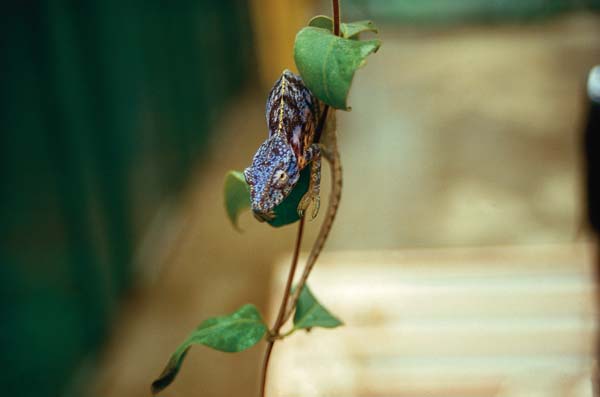 When you purchase any chameleon, please do the animal and yourself a favor: Get a fecal check. It’s the only way to be completely sure the animal doesn’t have parasites. Veterinarians can do this simple test. All you have to take to the vet office is a fresh stool sample. Even a healthy-looking, active chameleon with a tight grip and strong tongue can harbor a fatal parasite load. Parasites are commonly aggravated by stress, which can grow to unmanageable levels in a relatively short amount of time in captivity. Even a very heavy load of parasites, if caught early in an otherwise healthy chameleon, can be treated and cured.

However, a fecal check won’t detect all parasites. Additional tests, such as blood tests, may be needed as well. If parasites are found, follow the veterinarian’s recommendations for treatment.

Parasites sound scary, but in reality wild chameleons usually have some sort of parasite, and captive animals can contract them at any time from feeder insects. This is perfectly normal. An annual fecal check is a wise precaution for all your chameleons whether they are wild-caught or captive-bred.

Due to my obsession for knowledge about Old World chameleons, I have succeeded in breeding some of the most difficult species in the world. I love them all, but Furcifer lateralis subspecies are real gems. They are beautiful, easy to tame, hardy and healthy chameleons, but nurturing these small creatures is a big responsibility. Be sure you are ready for the challenge.

LINDA J. DAVISON owns Sticky Tongue Farms, which has specialized in deparasitized imports and captive-bred chameleons since 1993. She also is the author of Chameleons: Their Care and Breeding and numerous articles. For more information on Sticky Tongue Farms and products, such as the Miner-All and Vit-All supplements, visit stickytonguefarms.com.