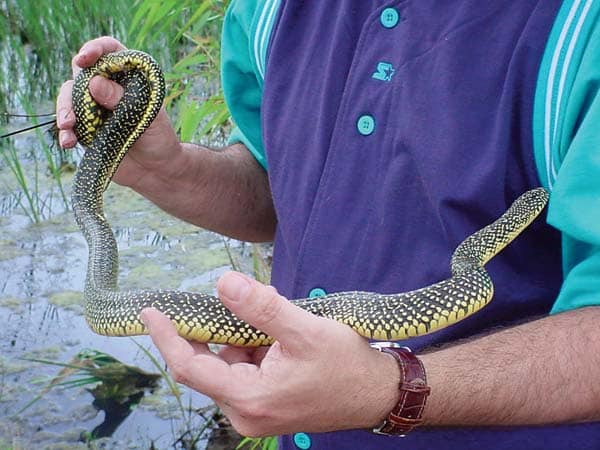 Texas might not sound too wild for readers in that part of the world, but it sure was exotic to my son, Mitch, and me. We have enjoyed the animals of Michigan all our lives, but our best day up North cannot compare with a few days we spent in April 2008 at Big Thicket National Preserve near Kountze, Texas. For two magical days herps appeared on or next to the path. They gave us maximum satisfaction with minimal fuss. 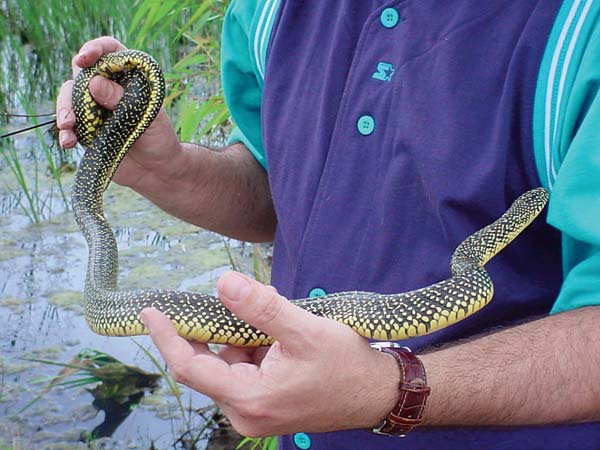 Big Thicket has several named clusters of land with slimmer holdings along the waterways connecting the clusters. Large tracts of state-owned and privately owned forest are adjacent to the national preserve, which creates a panorama of habitats all protected from development. 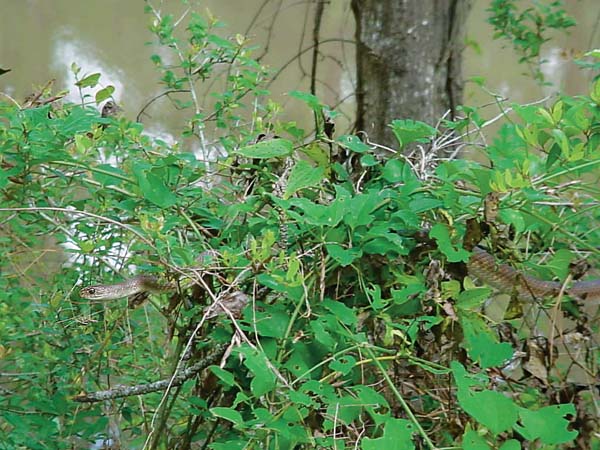 A tan racer (Coluber constrictor etheridgei) peers through the protection of a low bush.

Turkey Creek is one of these clusters of land in the preserve wide enough for some trails, and a local resident and friend named Tim McNicholl advised us to try it first. We recommend the species list from the visitors center. For tourists such as us it was much easier to use than a field guide. Any visitor should also take a few minutes to study the venomous snakes in East Texas. Big Thicket has them all.

After landing in Houston, we reached Kountze at the south end of Turkey Creek in less than two hours. The town motto, “Gateway to Adventure,” came true for us in moments. I was locking the car when Mitch called out from a path. Still within view of the parking lot, he had spotted a snake and a frog. The western ribbon snake (Thamnophis proximus) kept nice and still for us. It had a yellow V-shaped mark on its head, which I have never seen on its northern relatives. The Blanchard’s cricket frog (Acris crepitans blanchardi) also allowed us to get a close-up photograph. While taking these photos, we also spotted a small broad-banded water snake (Nerodia fasciata confluens) and a striped chorus frog (Pseudacris triseriata feriarum).

As we turned from this spot and started down the path, four little brown ground skinks (Scincella lateralis) sprinted for cover into some leaf litter. These little guys were everywhere. The rustle of an escaping skink accompanied virtually every step we took down the path, but their shyness and tiny size made them the most difficult subjects to get on camera.

Another broad-banded water snake, green frog (Rana clamitans melanota) and striped chorus frog later, we saw a red lizard head sticking out of a hollow log. The bulging side of its jaw and lack of stripes made us think it was a broadhead skink (Eumeces laticeps), but it could have been a male five-lined skink (Eumeces fasciatus) with a lot of attitude. This lizard stood its ground as if it were invisible, letting us get much closer than most other lizards allowed. I actually touched it before it completely withdrew into the log.

In a thicket near the skink’s home, we saw a long snake slither through the underbrush. Its slender light-brown body didn’t have markings, so we guessed it was nonvenomous. Leaving the path I approached the snake from one side while Mitch held the camera ready. The snake climbed up into the branches of a bush to get a look at us, and we discovered that it was a tan racer (Coluber constrictor etheridgei) almost 4 feet long. We saw it again on the return journey back to the parking lot in the same spot. 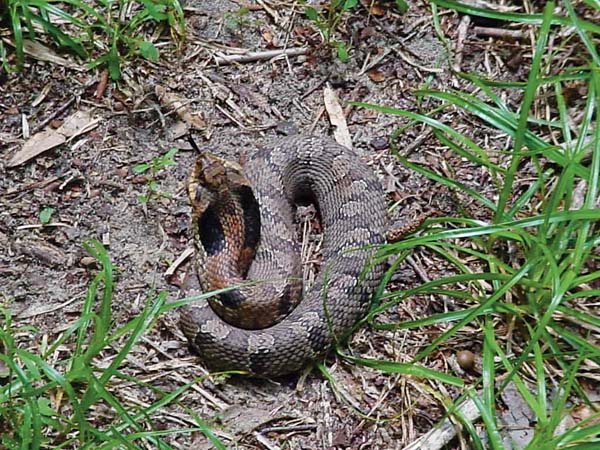 Although this eastern hognose snake (Heterodon platirhinos) made an impressive hissing sound, it didn’t play dead.

We also found out what happens when you stand on a fire ant mound. We each took a turn at that one and teased each other as we dusted swarms of ants off our legs. The last interesting specimen of the day was a geometrid caterpillar bravely disguised as a twig growing out of a fence post next to our car.

The second magical day was a much longer hike into the loops of the southern Turkey Creek area. There it’s possible to walk from cypress swamp to dry pine lands in 30 minutes, and the animals change with the habitats. Skinks and water snakes gave way to northern fence lizards (Sceloporus undulatus hyacinthinus) and six-lined racerunners (Cnemidophorus sexlineatus sexlineatus) as the land got a little drier. 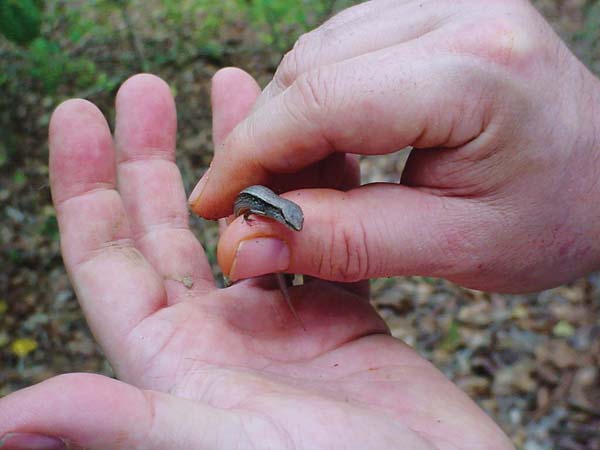 Ground skinks (Scincella lateralis) skittered away with every footstep..

Almost all of the water snakes were broad-banded, which was nice because we don’t have those up North. They were careful not to let us get very close. But we encountered an eastern hognose snake (Heterodon platirhinos) hissing like an air pump right in the middle of the path. Mitch could understand how a predator would be intimidated with so much noise from a snake. Unfortunately, the animal slithered away without giving us the rest of its show. It didn’t play dead as the species is known to do.

Big Thicket trails have wooden bridges over the streams, and five-lined skinks love these bridges as basking sites. Mitch and I slowed down and approached each bridge as quietly as we could. The method produced close-up looks at lizards and snakes. We often saw a water snake resting on a log beneath a bridge, and then another snake would take off into the undergrowth as we reached the far side.

When we found a southern copperhead (Agkistrodon contortrix contortrix) at the base of a tree right next to the path, we were both astounded. It blended in with dead leaves so well that we could have easily missed it, which made us wonder how many more we had not seen. Its proximity to the path also made me feel foolhardy for wearing sandals.

I used a dip net to wrangle the copperhead into position for a photo, and after a few prods the snake lay still without fuss. I was thinking about touching its tail, but Mitch convinced me to play it safe and settle for just a photo. “Don’t do it, Dad,” he said. “If the snake doesn’t bite you, mom will kill you.”

Although glaciers of the Ice Age pushed everything south, they did not reach into the region that now supports Big Thicket National Preserve. An amazing array of trees, birds, reptiles and other life not mentioned in this article are found here. One place, the Sundew Trail, is devoted to carnivorous plants. Four species of these plants are found in Big Thicket.

After a brief visit to the visitors center to shop for souvenirs, we returned to the trails. Before long a Texas rat snake (Elaphe obsoleta lindheimerii) crawled across the path in front of us. Knowing how grumpy rat snakes can be, we settled for a photo from a few feet away and moved on. When it detected us, this snake tensed into an elongated position with lots of small, sharp bends in its body. I took a picture and then tried for a close-up. Then the snake resumed its usual contours and slithered away.

As late afternoon began dissolving into dusk, we made our way to a large drainage ditch, which was not part of the preserve. The Federal Emergency Management Agency uses the Big Thicket area, which acts like a sponge, to help drain floodwater away from settled areas. It was weird to see big floodgates next to swamps, but broken rock around the gates sheltered frogs and snakes.

It was here that we found a small brown snake with a cream belly and pointed head. It had a big abdomen and a skinny tail, so we assumed it was gravid. Knowing it was an adult helped us to identify this little gem as a rough earth snake (Virginia striatula). 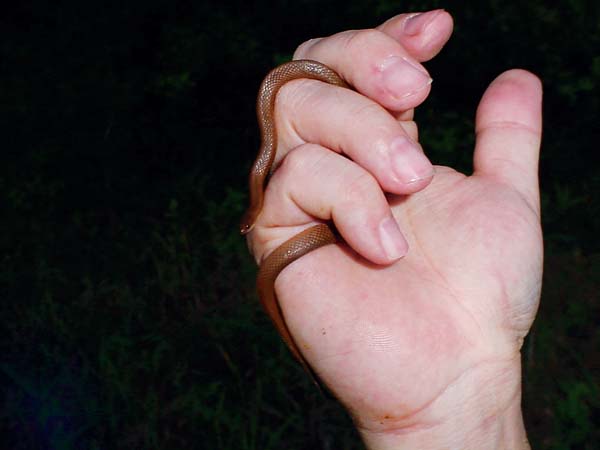 Our last find of the day surprised us both. Next to a concrete ramp we found a 4-foot-long speckled kingsnake (Lampropeltis getula holbrooki). It had a lot of cover and several escape routes, so I picked it up to take its picture. What a sweetie. Aside from vibrating its tail for a minute, it relaxed on my arms. The yellow speckles were so bright we wondered whether they really helped the snake blend in with surrounding plants and rocks. Yet the snake acted so confident that we felt assured it knew how to survive.

Later in the week we visited another section of Big Thicket, but we saw few snakes and lizards. Apparently our timing was not as good as before. The lack of action also made us realize that a good day spotting animals is as much luck as it is planned. 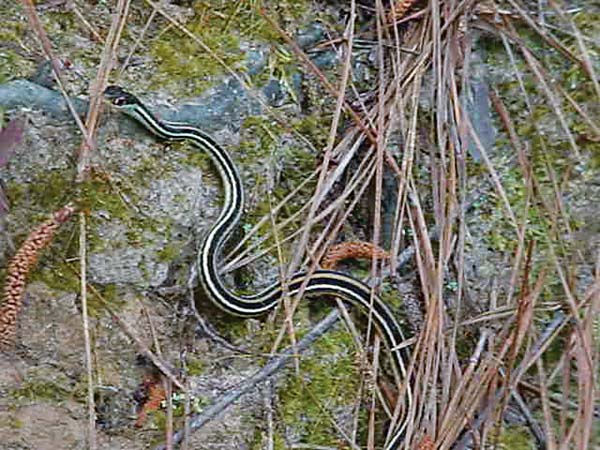 Found near a parking lot, this western ribbon snake (Thamnophis proximus) seemed to pose for its picture.

The preserve’s policy of sheltering long sections of rivers and streams gives animals a lot of habitat and ways to get around. Tropical storms and even hurricanes can hit the area, so the people near Big Thicket benefit from wetlands absorbing big rainstorms. Add tourism and educational opportunities, and it’s easy to see that everybody wins with this national preserve.

Visitors can choose plains, forests, swamps, bayous, savannas and sand hills for their explorations, and combinations of these habitats sometimes occur on the same trails. If you seek certain species, choose a place with the appropriate habitat, but don’t be surprised if your best finds are next to the parking lot.

MICHAEL McDANIEL has enjoyed watching animals in Michigan, New Jersey and the Virgin Islands. His sons, Mitchell and Emmett, have a blue-tongued skink, an armadillo lizard, a crested gecko and a leopard gecko. All are pets he wishes he had kept when he was young. Visit him at aquinas.edu/mathematics.