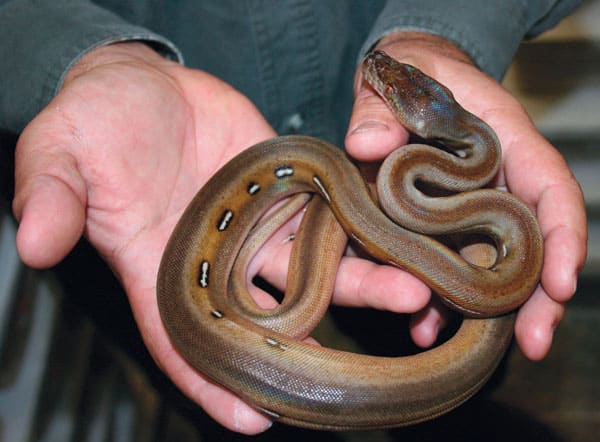 Excellent tips on how to safely handle your reptiles.

Some reptiles are very tolerant of handling, and others should not be handled unless it’s necessary for husbandry or health. These concerns should be addressed before a rhythmic pattern of interaction can be established. Keep the three Cs in mind when dealing with any reptile: cool, calm and collected. Here are 13 secrets to facilitate the best possible standard of interaction with your pets.

Herps are in captivity for our enjoyment, and we owe them every ounce of respect we have to make their lives as pleasant as possible. For us this means that if we are not 100 percent comfortable and confident with the animal we are working with, then we should gain the knowledge with a smaller specimen, a less difficult species to maintain, a less aggressive similar species, or work with the species under the supervision of an experienced herpetoculturist. 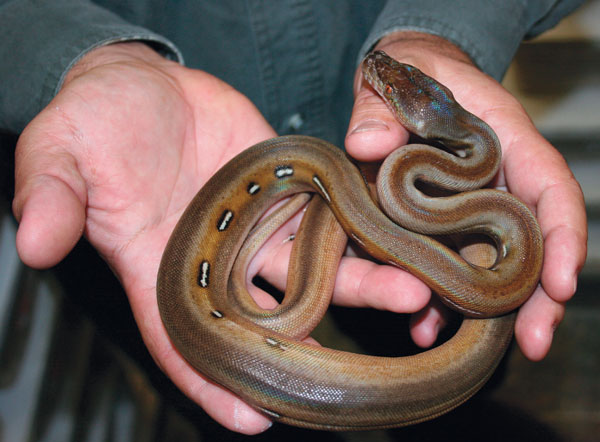 Always wash your hands before handling reptiles, especially after handling the animal's food.

It can also mean starting with reptiles in our budget regarding three key areas: housing, husbandry and acquisition. Always try to buy the best housing and husbandry tools you can afford first and then figure out what animals fit within your budget. Too often the opposite happens, and the animal suffers.

If you address these primary points from the start, your reptile will be happier in the long run, and you will be, too. This creates a more positive interaction on a daily basis, which undoubtedly creates a platform for the best possible relationship with your pet.

This is key for herpkeepers of all levels. Confidence leads to acute decisions. Acute, confident interaction eliminates fearful jerking of your body, hesitant approaches, and timid assessments of husbandry and health. 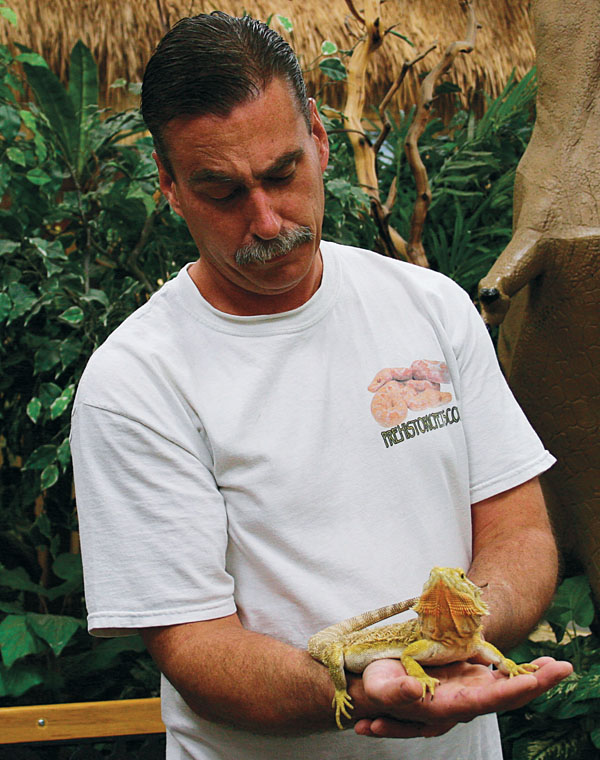 Tim O'Reilly correctly holds  a bearded dragon. Never grab a lizard by its tail. That could injure the animal or the very least stress it out.

Body language dictates response. When you are fearful or uncertain, the animal responds in turn. Be certain you are confident with a species before you acquire it. If you’re not, you will not enjoy your pet’s true potential.

Some species reputed to be less-than-ideal pets can make exceptional pets if a responsible owner raises them from a hatchling. Reticulated pythons (Python reticulatus) have been labeled as aggressive snakes over the years due to imported animals being fearful and heavily stressed. Yet Jay has several tame retics, including one 20 feet long. Establishing a relationship with a young pet and raising it with care is the best way to have a confident, stable relationship with that pet.

Snakes and lizards generally bite for one of two reasons: It’s a feeding response, or it’s a defensive strike. Either can be avoided in most cases. Before you pick up a pet snake from its enclosure, respectfully and confidently let the animal know that there is no food involved. This can generally be done by using an inanimate object to gently touch the snake’s nose, or by simply removing the animal from the enclosure with a small hook. 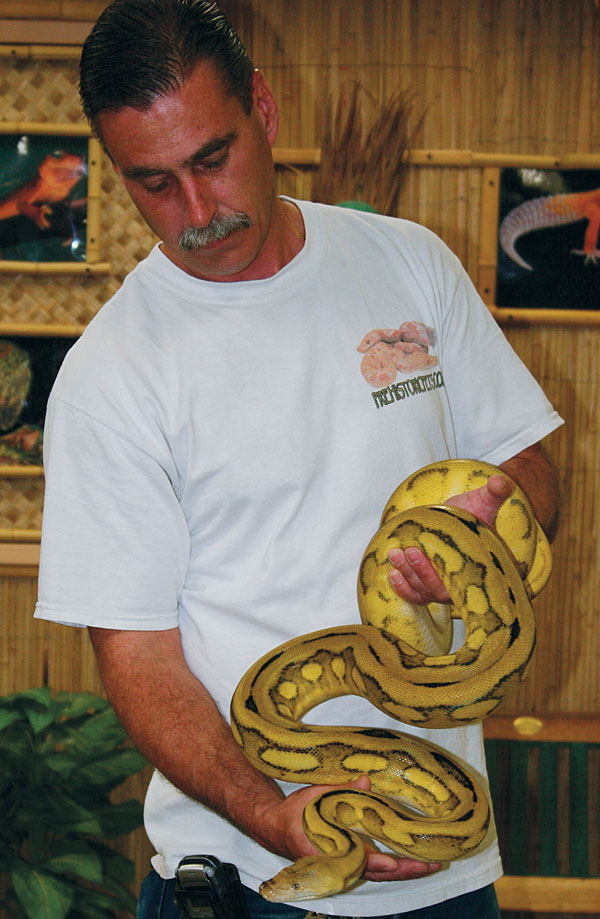 Notice that both handler and snake are relaxed as Tim O'Reilly holds this sunfire super tiger reticulated python.

“Break the hunt” is a concept you should keep in mind. Most snakes are ambush predators, and if you don’t break the concentration of the hunt, then you are playing the gamble of predator drive.

Whenever you use a hook to remove a snake from an enclosure, be certain to support the first third of the snake’s body with the hook while keeping the last two-thirds fully supported with your other arm and hand. This confident approach keeps the snake comfortable. Never grab a snake or lizard by the end of its tail to remove it from its enclosure. This puts serious strain on the animal. Anytime a reptile is not supported it can reinforce a defensive mentality in the animal and invoke fear.

4. Wash Your Hands After Handling Reptiles

Snakes and lizards have amazing sensory organs. If you introduce your warm hand to an enclosure with the sweet scent of a prey item on it, you have done little more than disguise your hand as a prey item. The easiest way to avoid this is by washing your hands before handling reptiles and between handling different species. This also helps to eliminate the risks of introducing foreign bacteria, germs or parasites to your animals. 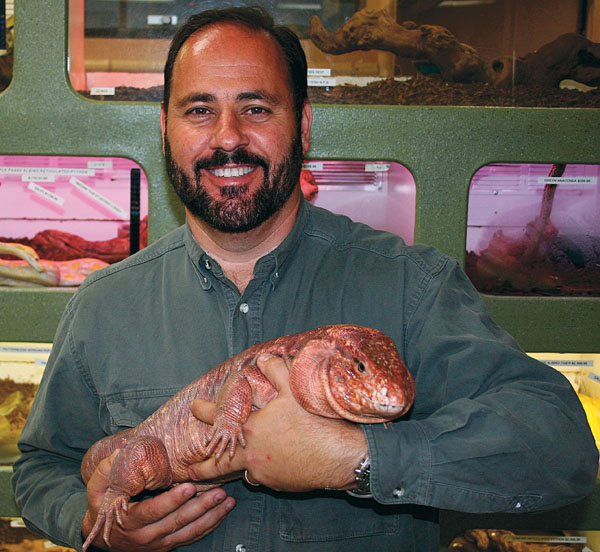 Jay Vella supports the body of an Argentine red tegu and directs the calm lizard's head away from his body.

Until you are completely comfortable with your pet snake or lizard, treat it like a loaded gun. Respect it, be confident, break the hunt, wash your hands and so on, but with newly acquired animals that have shown past aggression (perhaps due to fear), simply keep their heads pointed away from your body.

Gently orientating yourself or the reptile away from you slowly allows the animal to become accustomed to the feeling of motion in your hands while reducing the chance of the experience turning negative. Keep in mind that reptiles, especially snakes, follow movements and warmth. If you are moving your limbs or body in front of a snake you are trying to tame, the animal might perceive the motions as a threat.

Although there are exceptions, wild-caught animals are best left to experienced herpkeepers looking to establish a species in captivity. If at all possible, buy animals bred in captivity for your newest pet. This increases the chances of the animal being calm right away, and it also reduces possible health concerns, which can accompany wild-collected animals. Subadult and adult animals generally do not acclimate as well as juveniles.

A plethora of reptiles and amphibians are available to us in our hobby thanks to the efforts of professional breeders, private breeders and hobbyists. This has created a spectrum of choices for the would-be herp owner. These choices encompass intolerant animals, those tolerant of routine maintenance, those that are relatively tolerant, and the relatively exclusive group of animals outwardly social and interactive. 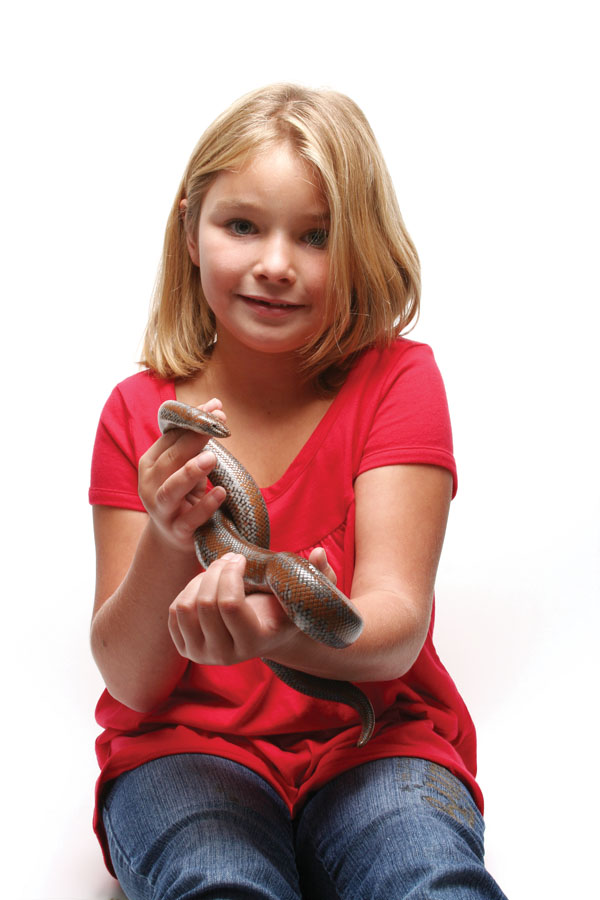 For the safetly of both children and reptiles, adults should always be present when young people handle animals.

Most frogs, most arboreal geckos, African rock pythons (Python sebae) and Nile monitors (Varanus niloticus) are animals that generally do not adapt to handling as readily and should be kept by more experienced people. Some of these animals may be defensive when young, which can lead to occasional nips. They generally outgrow this defensiveness with calm, confident handling and as they gain in size. As always, carefully research any animal you wish to keep, so you can evaluate whether you can meet an animal’s husbandry needs.

Always implement safe handling techniques. Holding most snakes or lizards by their tail puts pressure on their spines. Many lizard species shed their tails as a defensive measure, an ordeal that can be very hard on the animal. Avoid handling that can lead to injuries. It is a major factor in establishing a mutually beneficial relationship with your pet.

Reptiles and amphibians are ectothermic, which means that they regulate their body’s temperature using external sources. Whenever holding your pet, keep in mind that the average room temperature is generally much cooler than what most reptiles need to maintain their body temperature. A good general rule of thumb is to limit the pet’s time period out of the cage to less than 30 minutes. Otherwise you may lower the animal’s body temperature too low and potentially risk its health.

Whenever an animal is given a sizeable meal that can’t be digested in a single day, it is best to limit handling. Stress on the abdomen during digestion can provoke regurgitation, and this is harmful to animals for numerous reasons. Stomach acids could do damage, or bacteria from digesting food could travel to more susceptible parts of the body. Do not handle an animal with a visible lump unless it is absolutely required, and always exercise extreme care and caution.

Whenever allowing a child to pet or hold a reptile, adults have a responsibility to protect both the animal and the child. Rough handling by a child can potentially ruin an animal’s trust of people. Animals of all kinds have the potential to bite and scratch — or tail-whip in the case of some lizards — which can potentially harm children or scar their perception of these ectothermic beauties.

Never allow children to remove an animal from its enclosure because this is their greatest chance to receive a feeding-response bite. A secondary concern to exposing pets to children is cleanliness. We recommend children less than 18 months be kept away from pets because their immune systems aren’t stabilized or mature. When allowing a child less than 5 years old to pet or touch a reptile, wash the child’s hands before and after to prevent the risk of bacteria affecting the child. As it so happens, poultry and poultry products are much more of a concern than a reptile, but caution should still be exercised.

13. Educate Yourself About The Reptile You Wish To Keep

Animals with the potential to be dangerous should be handled by experienced people only. Be smart; it is the responsibility of each individual to assess the risks they are comfortable taking. Uneducated, poorly conceived actions fueled by ego are dangerous — to yourself, to those around you and to other reptilekeepers across the nation.

If we do not govern ourselves with maturity, we may lose the choice of keeping some of the most beautiful animals in the world. Venomous animals and crocodilians face hard times ahead because of legislation. Even large constrictors are receiving the ire of many groups due to irresponsible owners allegedly releasing their pets into the wild.

Never release a pet into the wild; find a legitimate fellow herper or rescue organization to take your pet. It is time for us to show that we are a responsible community from the ground floor up.

When you use your head and follow proper protocol, most reptile bites are rare, and the bites that do occur are generally hyped-up for show. Most snake bites scar merely the handler’s ego. However, caution should still be exercised, especially with large lizards that can cause severe damage under the wrong supervision. Treat your reptiles with care and respect, and you will be able to enjoy them for years to come.