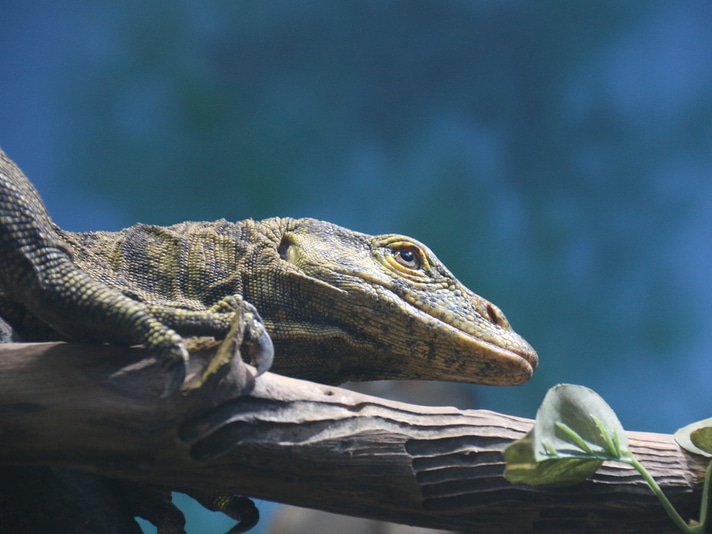 The Gray's monitor lizard, known as Butaan in the Philippines, is listed as Vulnerable by the IUCN.

Escaped Northern Pine Snake Reunited With Owner After 7 Months on the Loose
Scared Of A Snake, Man Tries To Shoot It But Hits Mother-In-Law Instead
The Blue-Tongue Skink’s Tongue Is Blue To Ward Off Predators, Study Says

If you live in San Diego or are planning to visit the city this summer, you might want to check out the San Diego Zoo, as it is showing its latest reptile, a rare, 1-year-old Gray’s monitor lizard (Varanus olivaceus). According to KPBS.org, the parents of this lizard were confiscated from smugglers by the U.S. Fish and Wildlife Service and brought to the Los Angeles Zoo, where three offspring were born. The Gray's monitor lizard is listed as vulnerable under the IUCN Red List.

"Monitor lizards, if you look really closely, actually look like dinosaurs," Laurie Arends, a keeper at the San Diego Zoo told KPBS.org. "They have that focus and attention, so monitor lizards will pay attention all the time and they use that instinct to get through life."

The Gray’s monitor lizard is native to the Philippines, specifically from the Luzon, Catanduanes, and Polillo Islands. They are known locally as butaan. The Gray's monitor lizards live in trees and are very shy. In the wild, the lizard eats pandan fruit and other tropical fruits, making it unique in the world of Varanus lizards. It is primarily a fruit eater. You can see the lizard in the Klauber-Shaw Reptile House at the zoo.

Loading...
Newer Post
Healthy Population of Blanding’s Turtles Discovered in Nova Scotia
Older Post
Australian Man Shows Off His Snake on Train and Gets it Confiscated by Police
Advertisement