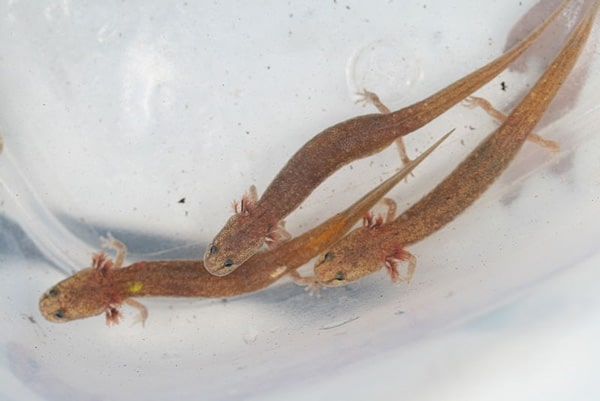 Woman At Kruger National Park Happens Upon Cobra Trying To Eat Monitor Lizard
Rainbow Snake Seen In Florida’s Ocala National Forest For First Time Since 1969
Researchers in the Philippines Discover Two New Asian Water Monitors in a Manila Black Market
Two salamanders native to Central Texas have received Endangered Species Act protections by the U.S. Fish and Wildlife Service. The protections were the result of a settlement between USFWS and the Center for Biological Diversity in 2011 that is speeding federal protections decisions on more than 700 species in the United States.
“Saving these salamanders will also protect the precious springs that give drinking water and recreation to Texas communities,” Collette Adkins Giese, a Center lawyer said in a statement. “These rare salamanders are found nowhere on Earth except central Texas, and right now they’re facing extinction. Endangered Species Act protection will give them a fighting chance.”
The Salado salamander (Eurycea chisholmensis) resides in springs in the town of Salado in Central Texas. It is just two inches in length and has reduced eyes when compared to other spring dwelling salamanders. It can be found in just four springs in the town and has been observed just a handful of times over the course of the last several decades. Due to rapid growth in the region, the salamander is vulnerable to groundwater contamination and hazardous-materials spills.
The Georgetown salamander (Eurycea naufragia) can be found in springs along five tributaries along the San Gabriel River and in three caves in Williamson County, Texas. The amphibian has a broad and short head with three pairs of bright red gills on each side behind its jaws. Its eyes are large with gold irises. It is threatened by water pollution and restricted water flows. It had been waiting more than 10 years for protection after the service determined in 2001 that it deserves federal protection.