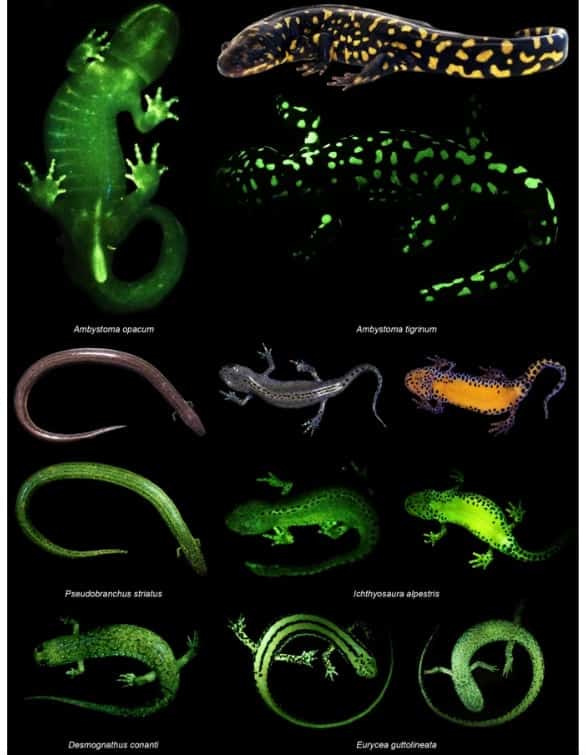 Biofluorescence Is Strong In Certain Amphibians

It is not known why some amphibians glow brightly when exposed to UV light.

Researchers Jennifer Lamb and Matthew Davis of St. Cloud State University in Minnesota have discovered 32 species of amphibians that fluoresce under blue light.

The researchers, in their published paper "Salamanders and other amphibians are aglow with biofluorescence" say biofluorescence is widespread across Amphibia with a focus on salamanders, and that it is not restricted to certain families of salamanders. 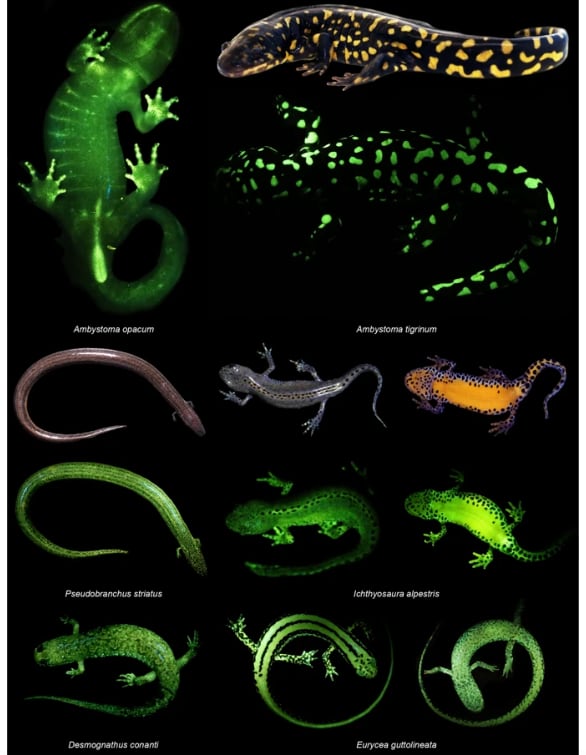 Biofluorescent patterns are variable across salamander diversity and anatomy. We observed biofluorescence across the salamander radiation. Salamanders with bold patterns and colors fluoresce brightly (e.g., Ambystoma tigrinum), and dorsal surfaces often fluoresce less intensely than ventral surfaces (e.g., Icthyosaura alpestris) depending on patterning. In some salamanders (e.g., Ambystoma opacum) bones (e.g., dentary, digits) that are otherwise not visible under white light fluoresce distinctly, as does the cloacal region. Included are white light images of three species (A. tigrinum, Pseudobranchus striatus, I. alpestris) above images depicting biofluorescence. Biofluorescence was imaged by exposing individuals to blue light (440–460 nm) and viewing them through a yellow long pass filter (500 nm).

“In some species, we do see differences in colour patterns between males and females, so it could be related to reproduction,” Lamb said. “In the loudness of a frog chorus, with hundreds calling at once, perhaps females could use the light to find a specific male when the audio signals aren’t helpful.” ShThe researchers are now trying to figure out what makes the amphibians glow.

The researchers noted that salamanders with bold patterns and colors (Ambystoma tigrinum) fluoresce brightly, with the dorsal surfaces emitting a brighter coloration than the ventral surfaces of the amphibian. In (Ambystoma opacum), its bones (teeth and digits) that can't be seen under white light fluoresce more distinctly.

This isn't the first instance to find that amphibians have been shown to be biofluorescent. In 2015, researchers in South Africa found that the South American polka dot tree frog (Hypsiboas punctatus) has the capability to fluoresce from a normal coloration of greens, yellows, and reds, to a bright blue and green glow when exposed to ultraviolet illumination.

But amphibians aren't the only herps that glow when exposed to light. Back in 2015, researchers with National Geographic Emerging Explorer were SCUBA diving in the Solomon Islands when they happened upon a biofluorescent Hawksbill sea turtle.

The complete paper can be read on the Nature.com website.