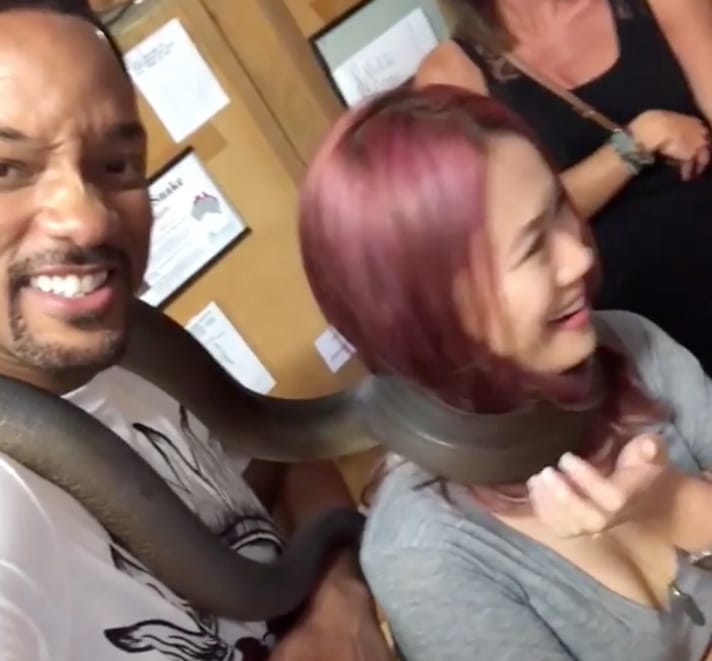 Will Smith Handles Olive Python Like It's No Big Deal

Thanks to his daughter Willow, Will Smith has no problem handling the snake.

Will Smith is a super star movie star. But did you know that his daughter, Willow is a known reptile fan? She keeps 10 snakes in her room, including a boa constrictor that she has had since 2008. So it is no wonder that the action star has no problem hanging around snakes, or had no problem with an olive python  (Liasis olivaceus) that was hanging around his neck at Sydney Australia’s Featherdale Wildlife Park.

Smith, who is on a media junket to promote his new film, Bright, did a few things while at the park with Australian blogger Natalie Tran. One of which was introducing Natalie to an olive python.

While Smith carried much of the python, the snake explored further and got to know Tran a little better. Smith posted the video to his Instagram, and  in just 14 hours received more than 1.6 million views.

Smith then played a joke on his son Jaden.

“Jada and I are welcoming a new member to our family. Hey Jaden @c.syresmith, he’s taking your room,” Smith wrote on Instagram.

While some actors are hesitant to handle reptiles, Smith has some experience, thanks to his daughter Willow.