In the fall of 1995, I was browsing at a local pet store that had a rather large selection of reptiles (for a small town in Mississippi, that is). There were iguanas, bearded dragons, various common geckos, savannah monitors and large constrictors, but one lizard seemed to beg for my attention. It literally came to the front of the enclosure as if to say, "Please buy me." It was an interesting lizard, with a roosterlike crest, half-inch spines running from the top of the head to almost the end of the stub tail, big eyes and puffy jowls. This was the first time I'd ever seen the magnificent Asian water dragon (Physignathus cocincinus).

The lizard's color was a light olive green with hints of emerald and blue. It was an adult male that was stunted from being raised in too small an enclosure. I did not purchase the dragon at the time, however; I already had a 3.5-foot green iguana that was becoming quite the handful. 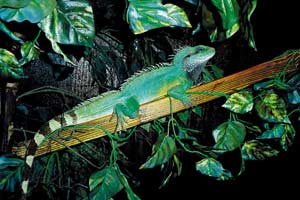 A couple months later, while opening Christmas presents, I began to shake a box that I was just handed.

"Don't shake that one!" yelped my mother.

And that was how I received my first water dragon. Now named Ziggy, he was the exact dragon that I saw at the pet shop. My mother had been secretly keeping him at her apartment for two weeks.

Now I was faced with the task of properly feeding and housing my new friend. I quickly acquired every book I could find and read them from cover to cover, more than once. Physignathus cocincinus hails from the dense forests of Indonesia, Vietnam, Thailand and South China. Commonly called the Asian water dragon, it's also known as the Chinese or green water dragon (aptly so, as the normally imported specimens are very green indeed).

Asian water dragons can reach a length of 24 inches in one year when raised properly, to a total length of approximately 36 inches (this being mostly tail). They react to stress and cool temperatures by darkening their colors, and they can turn almost black when seriously stressed. They can live 10 to 12 years.

It appeared that water dragons were simple to take care of and quite personable. What was required was a large water pan, a moderately sized enclosure and a few dusted crickets. Of course, as with all diurnal lizards, a good heat lamp was necessary. The books were never very clear on the need for ultraviolet (UV) lights. Asian water dragons are not the sun lovers one might expect; they spend most of their days in densely forested areas on the edge of rivers, ponds and lakes (later, much to my surprise, when I built a large outdoor enclosure for my water dragons, they hid from the sun diligently).

Every book I read seemed to encourage breeding water dragons as a conservation effort to discourage collection of this species in the wild. Some provided detailed instructions. A very noble endeavor indeed, and I thought it would be fun to have some tiny little dragons bouncing around.

Ziggy was a male, so if I was to breed water dragons, obviously my first step was to procure a healthy female. This led to the discovery of the classifieds section in REPTILES magazine. I found a breeder who could deliver the goods: Jeff "Buzz" Ross of Fort Davis, Texas. I told him I needed an adult female Asian water dragon to pair with my male. I also discovered that he had blue Asian water dragons. Buzz explained that he had received a colony of them from Europe a few years back, and they all were turning bluer every year. They sounded fantastic, and it was one of these that I decided to purchase.

I sent Buzz a money order, and a couple weeks later a package arrived. I opened the cloth bag inside, and there was the bluest creature I had ever seen! It was powder-blue aquamarine from head to toe. I was amazed to say the least. This dragon was in tip-top shape. It was almost twice as long as Ziggy with a perfectly shaped, whiplike tail.

I called Buzz to thank him and tell him how impressed I was with the lizard. During our conversation, I happened to mention the large spikes on its head, and that was when Buzz realized he had accidentally mixed up his shipments. He sent me a male that someone else had ordered. Luckily, Buzz had other blue dragons and said he could send a female to match the male I received by mistake. We straightened things out, and soon another stunning blue dragon arrived – a female – and I quickly reserved the next available female to round out my breeding trio.

I believe that the blue dragons are axanthic (loss of yellow pigment), much like the blue-morph White's treefrogs (Litoria caerulea) that are now being bred in abundance. These creatures are normally green also.

A good-sized arboreal-oriented enclosure (taller than it is wide) that is opaque on the front and sides (mesh can be used for this) or heavily outfitted with vines, plants and perches will provide a stress-free living space for water dragons. A minimum cage size would be 36 to 48 inches long, 16 to 24 inches deep and 48 to 72 inches tall.

If you plan to use an aquarium, a 55-gallon (or larger) enclosure (equaling 12 cubic feet or more) for adults, and a 30-gallon tank for subadults and hatchlings, will work. Stunting may occur if young lizards are not moved to larger enclosures as they mature.

Custom-built cages made of glass, Plexiglas, soft mesh and/or smooth wood are also available. Building your own custom lizard vivarium can be fun, if you have the time and patience.

Use vertical and horizontal tree limbs, plastic vines and plants to create a tropical paradise. Live plants are nice but will soon be trashed by healthy water dragons. Sterilized tree limbs and treated lumber (such as 2 by 2s) make excellent perches. Tree limbs can be sterilized by soaking in a mild bleach solution for 20 minutes and then rinsing well.

Substrate can be newspaper, lizard litter (do not use cat litter), orchid bark, cypress mulch, peat moss, a mixture of sand and soil, or reptile carpets (beware of loose threads that can snag water dragon toes).

A 100-watt incandescent light bulb is a sufficient heat source for most water dragon enclosures in the 30-gallon-and-up size range. Maintain the cage temperature between 80 and 88 degrees Fahrenheit during the day. Use a light timer to regulate the day/night cycle at 12 to 14 hours of daylight, depending on the season (shorter during the winter). Nighttime temperatures can drop to 70 to 75 degrees. Growing dragons should have access to full-spectrum UVA/UVB light.

Water dragons sometimes suffer rostral damage as a result of rubbing their noses against enclosure walls. Affected areas can be treated with Sporine sauve applied topically. It is best to apply this after the dragon has gone to sleep at night. Visual barriers, such as wide strips of cardboard along the bottom of the enclosure, are the easiest way to prevent this behavior-induced affliction.

Water dragons like water. A mini kitty litter tray makes an ideal water pan. Bigger pans can be cumbersome to clean, and clean water is key to your water dragon's health. Nine times out of 10, they will defecate in the water, which actually makes for a very clean overall enclosure. Once a day, empty the water pan and clean it with 5 percent bleach/water solution. Rinse it well, and refill it about halfway with tap water or well water that is fit for human consumption.

Most tap water contains a certain amount of chlorine, and its effect on water dragons has not been properly studied. You can dechlorinate it by letting the water sit in an open container for 24 hours. If you want to set up waterfalls, filter systems, bubble rocks and fog systems, be sure to clean their affiliated equipment every other day. Ask yourself: Would you drink the water in your dragon's cage? If not, clean it.

Water dragons enjoy a daily misting immensely, but don't overdo it. Jungle rot or blisters could occur if their enclosures are kept too moist. This can be corrected by keeping them dry and warm. Apply Betadine to blisters to cull infection.

Crickets, mealworms, super worms, wax worms, earthworms and high-grade canned chicken cat food (make sure there's real chicken in it) are all relished. My adult lizards love chicken cat food; most juveniles will only eat insects. Recently, I have experienced great success with fruit-flavored dry lizard and bird pellets. I recommend supplementing the diet with either of these. Red and white grapes, soft pears, figs (native fruit for them) and bananas make up the noninsect portion of my dragons' food pyramid.

I alternate these food items to achieve a balanced variety. All foods should be pesticide free. Feed your dragons each day, though missing a day won't cause any harm. Dust crickets two or three times weekly with top-quality vitamin and mineral supplements that are high in calcium. Gut-loading crickets or worms by feeding them a commercial gut-loading formula or a mash of assorted vegetables an hour before offering them to your dragons will ensure happy, healthy dragons.

Once you have acquired a healthy pair or trio of water dragons, it is highly recommended that you have them checked by a veterinarian. A simple deworming can do wonders for your breeding success rate (not to mention overall dragon health).

They will mate once mature without any temperature/light cycling. Females may lay eggs without ever breeding as well. I've received calls about stressed-out lone females, and the reason for their stress usually turns out to be the lack of a proper eggbox in which to lay their eggs.

Female water dragons mature at about 1 year of age; males mature at around 8 months. A mature male will do a lot of head bobbing and chase the females. Eventually, he will grasp a female firmly by the nape of her neck, twist his tail around her and insert one of his hemipenes. Copulation usually lasts about two minutes.

Within one or two months of copulation, the female will appear plump and begin looking for a suitable egg-laying site. Provide her with a large (16 inches long by 10 inches wide by 16 inches deep) tub or pot of damp peat moss. She will dig a hole then deposit and cover her eggs. She may also dig a "decoy" hole.

Remove the eggs – a clutch could number six to 15 (my personal record) – and place them in a small container (I use Sterilite containers or plastic shoeboxes) with 1 inch of damp perlite on the bottom. Then conceal them with damp sphagnum moss. Cover the container with a lid or plastic wrap; a few air holes should be punched into the cover.

Place the egg container in a suitable incubator with a temperature set at 82 to 84 degrees Fahrenheit. For an incubator, I use a 3- to 4-foot-long beverage cooler. I place a 12- to 16-inch-wide, plastic-coated refrigerator rack inside, positioned above 4 inches of heated water. Egg containers are placed on the racks. Incubator temperature is regulated by a 50- to 75-watt aquarium heater with a built-in thermostat that is placed in the water. Be sure to keep a thermometer in the incubator so you can gauge the temperature.

After 60 to 65 days, you should have 6-inch water dragons hatching out. Place them in their own enclosure and offer them small amounts of quarter-inch crickets twice daily. Place some pelleted lizard food (iguana food works fine) in the enclosure so stray crickets have something to eat, but don't put in so many crickets that many go uneaten. Mist young dragons daily, and provide them with vertical and horizontal climbing perches.

I hope this article helps everyone interested in the care and breeding of these fantastic pet dragons! Good luck if you decide to try breeding them yourself – the results are well worth the effort!