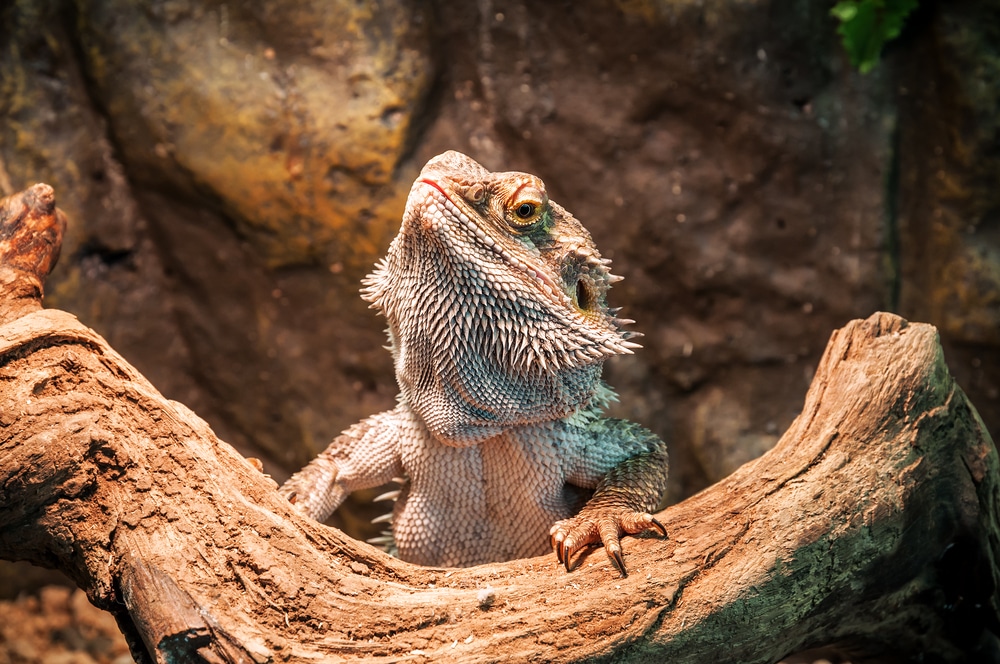 These medium-sized lizards are easy to care for, personable and often bond with their keepers.

With so many colors, traits and patterns to choose from, it’s easy to see why a single bearded dragon (Pogona vitticeps) quickly leads to a collection. These medium-sized lizards are easy to care for, personable and often bond with their keepers.

Even if you purchase a sexed dragon, re-sex it as it grows. Some males drop hemipenes later than others, so they can be mistaken for females early on. Males typically measure 18 to 23 inches long, and females measure 17 to 21 inches.

Never place males together; they can injure or even kill one another. They pace the cage and puff out their “beards,” which turn black during a dominance display. Face cages in the same direction, and use a sheet between racks to calm excitable males.

Females exposed to males too early may produce a clutch of infertile eggs. This can drain a female’s calcium resources and also can create egg-binding, which could kill the female.

We give our dragons a variety of foods. Fresh, high-calcium collards, mustard greens, endive and escarole are daily staples. These are left in the cage until the next morning and then replaced. Insects such as silkworms, superworms or Phoenix Worms are also provided. Depending on the dragon’s body weight, three times a week we dust about five superworms with Zoo Med Repti Calcium With D3. Fresh vegetables, including green beans, butternut or acorn squash, and okra, are fed every other day. Fruit, such as papaya, kiwi, raspberries and cantaloupe, is provided once a week and sprinkled with a supplement. 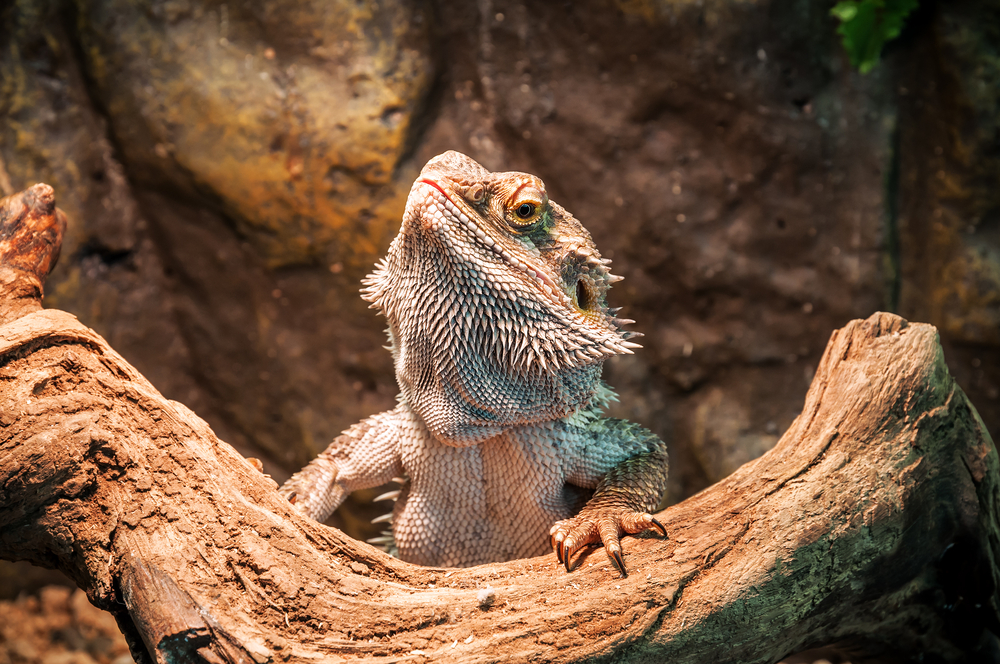 These medium-sized lizards are easy to care for, personable and often bond with their keepers.

Extra calcium is important for breeding females. Egg production requires a lot of calcium, and without it a female can develop a crippling bone condition known as nutritional secondary hyperparathyroidism. A calcium-deficient female lays clear or semiclear eggs, and these eggs may result in egg binding. These eggs also burst as the embryo grows, which kills the offspring.

We house a breeding pair, or two females and one male, in an enclosure measuring 4 feet long, 2 feet wide and 2 feet tall. A Zoo Med ReptiSun 10.0 fluorescent tube provides UVB, and an incandescent bulb, basking bulb or mercury vapor bulb can be used for heat.

In nature, bearded dragons live in the arid woods and deserts of central Australia. Captive adults breed best with a basking temperature between 110 and 115 degrees Fahrenheit, and a cool side between 80 and 90 degrees.

Leaning 1-foot-square cardboard egg-crate flats against the wall, we create climbing areas and a hide on the cool side. Egg crate allows us to continually change the internal structure of the cage, which offers beardies mental stimulation.

We soak our dragons twice a week for 15 to 30 minutes in a container long enough for them to stretch out, and we mist them from head to tail every night. Providing a water bowl is fine, but misting keeps the cages clean and allows us to monitor which dragons drink. Renal (kidney) failure is possible if a dragon becomes dehydrated.

A clean enclosure is imperative. After removing the lizard, we use a solution of 30 parts water to one part bleach to weekly clean the cage. We use the anti-microbial, anti-viral agent Nolvasan for daily cleaning.

Getting Down to Business

Introduce one female at a time into the male’s enclosure with a week or so between the next introduction. Observe the two lizards’ interaction, and make sure everyone gets along. The courting male puffs out his “beard” and bobs his head rapidly. If a female is not ready, she scratches at the walls or door to signal she wants out. Remove her, and try her again in a few weeks. A receptive female raises and lowers her head slowly. The male then jumps on her back, bites her neck, swings his tail under hers, and locks onto her by using his back legs.

Copulation takes less than a minute. Some dragons are so secretive that copulation is never witnessed. Remove the female after three clutches or if she is slow to recover her pre-laying weight.

In 14 to 21 days, the female scratches the substrate to indicate her need to lay eggs. We then place the female in an 18-gallon Rubbermaid nestbox with a 16-inch-deep mix of two parts horticultural vermiculite, which can be found in nurseries or garden centers, to one part water. The covered bin should be about 80 degrees. Place a clear 25-watt bulb over one side of the egg-laying box. The female will dig a hole, turn around and lay her eggs. The typical clutch has 18 to 23 eggs, but first clutches can have as few as seven. After the female lays her eggs, return her to her enclosure.

Carefully dig out the eggs, and place them in egg boxes for incubation. Keep the embryo side up. The embryo can be seen as a pink dot inside fertile eggs, which are white and puffy. Infertile eggs are smaller and yellow.

We place fertile eggs in a covered plastic shoebox measuring 14 inches long, 6 inches wide and 5 inches tall with holes around the top-third of the container. It is filled halfway with the same vermiculite-and-water mix used for the nestbox. Cover eggs two-thirds of the way with the mix.

Our incubators are set at 84 to 86 degrees. Fan eggs every other day by opening the container to let in fresh air and release gasses from the developing eggs. As the eggs incubate, slight condensation around the edges of the egg box is good. If an egg box isn’t showing mist, add a few drops of water to increase humidity. After 65 to 70 days, the eggs will sweat to indicate the onset of hatching.

Neonates are placed in a misted shoebox measuring 14 inches long, 8 inches wide and 6 inches tall with paper towel for substrate. We do not give them lights yet, but ambient temperatures are maintained between 80 and 85 degrees.

After 24 hours, babies are placed in rearing bins measuring 26 inches long, 13 inches wide and 10 inches tall, and heat and UVB lighting are provided. Keep the basking spot at 100 degrees. Each bin can hold three hatchlings.

By the time babies are 6 inches long, they each have a bin. This prevents tail- and toe-nipping, and keeps babies stress-free. Hatchlings kept alone grow faster than those kept with many competing, dominating siblings.

Hatchlings actively hunt for food, and they eat within 48 hours. We offer three-eighths-inch-long crickets and small Phoenix Worms two to three times a day. They get as many as they’ll eat. One meal a day is dusted with Repti Calcium With D3. Three times a week crickets are dusted with Rep-Cal Herptivite.

With some traits, such as hypomelanism, clear nails, leatherbacks and some translucent lines, the results of your breeding decisions can be seen at hatching. With color traits, the results are typically assessed after juveniles have had their first or second shed at 4 to 6 weeks of age.

With so many colors, traits and combinations cropping up each year, breeding bearded dragons is an exciting, wide-open field for both novice and experienced lizardkeepers.  REPTILES

TERRI M. SOMMELLA has raised and bred lizards for more than 20 years. She founded Fire and Ice Dragons in 2000 with Adam Seltzer, and they continue to produce beautiful bearded dragons and educate new herpers along the way. Visit her at fireandicedragons.com.