It began with a group of students at DePauw University, Indiana, joking about the way that frogs fall, but before long, this interest had triggered a serious scientific study. “I realized that it’s something that we should understand because clearly, not all frogs should be able to do it. There should be adaptations for allowing the frog to jump out of trees and not die when it lands on the ground,” said DePauw University biology professor, Jim Benedix. 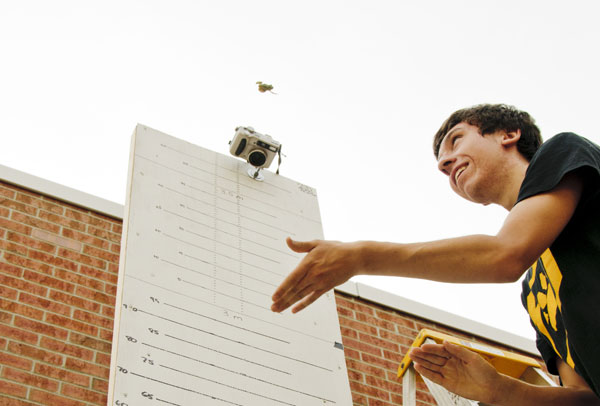 Frogs were tested fully awake and warm as well as cold and anesthetized. Luke B. Miller ’14 and a parachuting frog.

“Such behavior is called parachuting, when some animals drop directly down and try to slow their descent. In cases where they move laterally, it is referred to as gliding. We decided to compare frogs that live in trees and ones that don’t,” says Benedix. “The hypothesis was that a species that lives in trees is going to be better at falling and will do something that allows it to drop at a slower speed.

“So we built a 12-foot high wall, painted it like a ruler and set up two video cameras. From the front, we could videotape the frogs falling in front of the ruler, and a smaller camera took MP3s from the top to show that the frogs were actually doing the correct behavior. We put a water-filled pool at the bottom so that they had a soft place to land, if they were really bad at falling, so they would not injure themselves.”  It was then a question of getting the frogs to fall, videotaping them in the air, and calculating differences in acceleration. According to Benedix: “It took a while to create a formula to measure from the videotaping because it was limited. You could only get one frame every 30th of a second. So, you couldn’t precisely time them using the video, but you could measure how far they moved over a known amount of time.”

It was then decided to include toads in this research, because by nature, they are terrestrial. “We figured the frogs were going to fall really fast, and we wanted to have a comparison. We had frogs that were fully awake and warm, and also chilled some of them so that their reactions would be slowed and they probably wouldn’t be very good at performing the behavior. We wanted to show not only that there is a difference between species, but also to discover within a species if they fall less well when they’re groggy. “But the frogs that were chilled were still throwing their arms out,” Benedix says. “So we needed an extra comparison. We asked for permission from the Animal Care Committee to take a small sample of two of the three species and anesthetize them.

“We just finished analyzing the data, and in the end, it didn’t matter whether they were cold and sort of throwing out their arms in a slower, awkward way or if they were anesthetized, they all dropped at about the same speed. Basically, if you were a fully awake tree frog, you were pretty good at slowing yourself down. The cricket frogs, which are in the tree frog family but live on the ground, were also good at it but not quite as good as the tree-dwelling frogs. There actually was a difference between them. After that, it didn’t matter if you were a toad, cold, anesthetized; you just dropped like a rock. It was clear that the tree frogs do use parachuting behavior, and if they are arboreal frogs, they have perfected it. The cricket frogs can do it but just don’t do it as well.

“The importance of the study is that we were able to document the first step in the evolution of what could eventually become gliding behavior,” concludes Benedix. “It appears that in the species we studied, the behavior did evolve. “The tree-dwelling frogs have a very precise behavior that slows them down. If they were in a situation where it was crucial because they were jumping out of trees much more than I think they probably are now, then you’d expect those morphological traits to evolve further as well.”