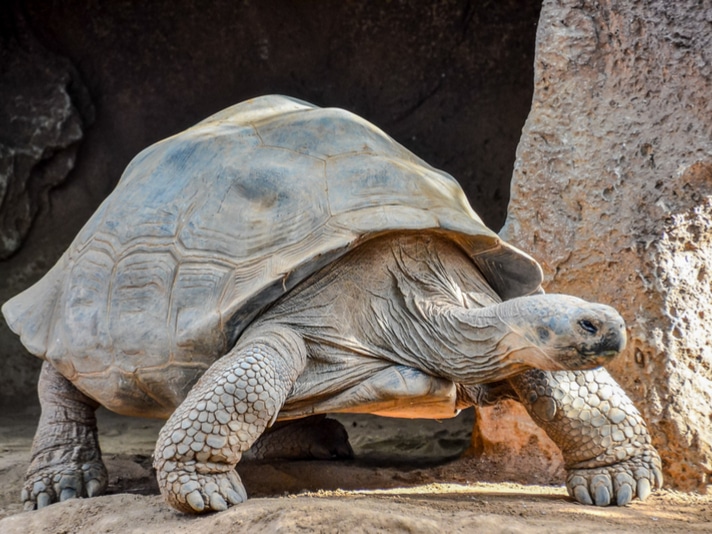 How do you treat a tortoise with a goiter?

Q. I have a Galapagos tortoise that is 20-years-old and now weighs about 400 pounds. I've owned him for 19 years (since he weighed 4 pounds). He is one of seven other large tortoises. All the tortoises eat the same diet (leftover fruit and vegetables from the grocery store). The Galapagos tortoise is the only one that has a goiter. Three years ago, I took the Galapagos tortoise to the vet, and he prescribed one tablespoon of iodized salt each day. The Galapagos tortoise hates salt, so I started giving him one kelp capsule (225 mcg) a day. There was some improvement but the tortoise's goiter was still there. Anyway, I increased the dosage to two and now three capsules a day (675 mcg). I did some research and found that the maximum iodine intake for an adult human should be no more than 1200 mcg per day. My Galapagos tortoise still has his goiter. Any suggestions?

A. The dosage of iodine recommended to treat goiter, which is an enlargement of the thyroid glands in the neck often caused by iodine deficiency, is approximately 0.3 micrograms per kilogram of body weight per day, although one source that I found recommended 2 to 4 milligrams per kilogram orally per day for two to three weeks, then once a week after that. That is a huge range of dosages! But, honestly, the safe range of iodine intake by reptiles is, as yet, unknown. By the way, to convert pounds to kilograms, just divide the weight in pounds by 2.2. So, your 400 pound Galapagos tortoise weighs 181.8 kg.

Another form of hypothyroidism that may result in an enlarged thyroid gland is from selenium deficiency. While this has only been reported in mammals, it is something to consider in areas where the ground and grasses are selenium deficient, although you said you are feeding fruit and veggies from the market. If the produce is grown locally, that might be something to look into for your tortoise.

There are dietary goitrogens, meaning that some plants contain substances that may interfere with the proper uptake of iodine by the thyroid glands. Food plant species in the Cruciferae (Brassicaceae) family contain glucosinolates, which probably play a role in the plant’s defenses against predators and fungal attack. When consumed by humans and animals, especially in excessive amounts, glucosinolates can inhibit thyroid gland functioning, causing enlargement and atrophy of the gland, or goiter. The Brassica species that contain goitrogens include broccoli, cabbage, cauliflower, rutabaga, kohlrabi and the oilseeds, rapeseed and canola. Cooking will effectively remove the goitrogens, which are also leeched out into the cooking water. Interestingly, glucosinolates and their breakdown products have been shown to inhibit tumor production. The vegetables in the Brassica family are considered to be beneficial in cancer prevention in humans.

While it is not necessary to exclude vegetables in the Brassica family from your tortoise’s diet, in this case, I would recommend that you don’t feed them exclusively or more than a few times per week, just to be on the safe side.

Unfortunately, the problem that you might have with your tortoise could now be iodine intoxication, as when over-supplementation occurs, the end result is again, goiter! This appears as identical to iodine deficiency, because of impaired utilization of iodine. So, just because the neck swelling did not go down or go away, that does not mean that you are dealing with the same problem, unfortunately. You may have an entirely different problem now.

I would recommend that you consider having a biopsy performed of your Galapagos tortoise's thyroid gland to now see exactly what is causing the enlargement. That way, you would know if it was necessary, or even advisable, to continue iodine supplementation. Anesthesia and surgery on a 400 pound tortoise isn’t performed every day, but it is both possible and safe, in the hands of an experienced herp veterinarian. You may want to ask around to any local zoos that keep the giant tortoises, and see if their on-staff veterinarian would be interested and willing to help you out with Gus. Or your vet could utilize the consultation service offered by most of the large veterinary labs, and discuss your case with a herp vet that has experience with the giant tortoises. This service is offered free-of-charge in most cases.

I hope this information helps you with your Galapagos tortoise, since not enough iodine and too much iodine both can cause the same clinical signs. Please discontinue the iodine supplements until you can find out for sure what is going on with his thyroids.

Margaret A. Wissman, DVM, DABVP has been an avian/exotic/herp animal veterinarian since 1981. She is a regular contributor to REPTILES magazine.