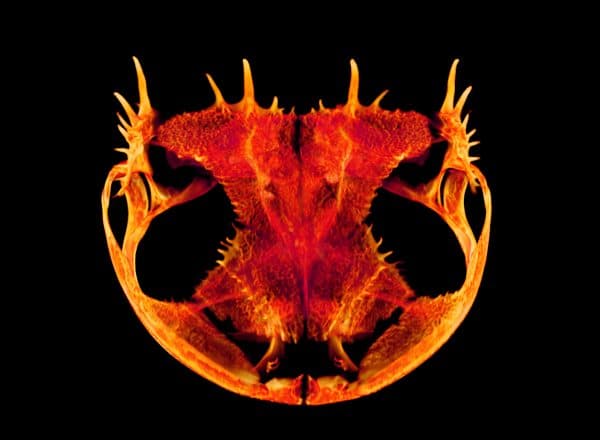 Why Some Frogs Skulls Have Evolved With Body-Like Armor

What is not known is if the frogs evolved to eat larger prey or if they had the armored heads all along.

Many frogs have fairly straight forward noggins; a smooth surface and a simple, frog-like skull shape. Other frogs however, have skulls that would seem to come straight out of a science fiction, doomsday movie. Armour plated, fake fangs and crests, and even spiked and laced with venom.

Researchers with the Florida Museum of Natural History have looked at the evolution as well as the functionality of these armored frog skulls– 158 species in total, and found a variety of patterns and grooves and ridges and pits that are formed by multiple layers of bone on some of these frog species. This trait, known as hyperossification, is the process where bone tissue forms outside the skeleton.

"Superficially, frogs may look similar, but when you look at their skulls, you see drastic differences," Daniel Paluh, the study's lead author and a University of Florida doctoral student, said in a Florida Museum of Natural History article detailing the study. "Some of the weirdest skulls are found in frogs that eat birds and mammals, use their heads as a shield, or in a few rare cases, are venomous. Their skulls show how strange and diverse frogs can be."

The last study on frog skulls was published in 1983 and since that study, the number of frog species that have been described has doubled, and with the assistance of CT scanning and other digitization methods, the understanding of evolutionary relationships and new analytical techniques have become known.

“Before we had methods to digitize specimens, really the only way to quantify shape was to take linear measurements of each skull,” Paluh said.

Paluh noted that frogs that eat birds, reptiles, other frogs and other vertebrates have larger skulls with a jaw joint at the rear, enabling them to scoop upmtheir prey more easily with their cavernous mouth. He noted that the horned frogs, aka Pac man frogs, have skulls with tiny pits that may enhance the frog's bite force.

What is not known is if the frog's evolved to eat larger prey or if they had the head strength all along.

“While the ancestor of all frogs did not have a hyperossified skull, that’s how the skulls of quite ancient amphibian ancestors were built,” the study's co-author David Blackburn, and Florida Museum curator of herpetology said. “These frogs might be using ancient developmental pathways to generate features that characterized their ancestors deep in the past.”

The complete paper, "Evolution of hyperossification expands skull diversity in frogs," can be read on the Proceedings of the National Academy of Sciences website.