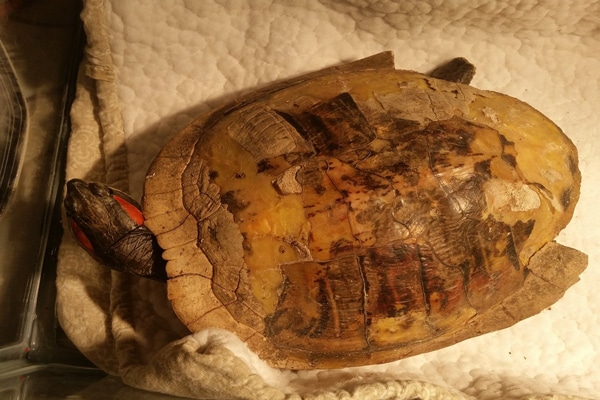 The red-eared slider was given up by its owners and the Pennsylvania SPCA is considering whether to file charges.

The Pennsylvania SPCA received an anonymous call about a turtle that was partially submerged in its enclosure, with the water was frozen solid. The turtle itself was also frozen and presumed dead. PSPCA's Humane Law Enforcement officers went to a row home to inquire about the turtle and the owners surrendered the red-eared slider (Trachemys scripta elegans) to the officers, according to Philly.com. 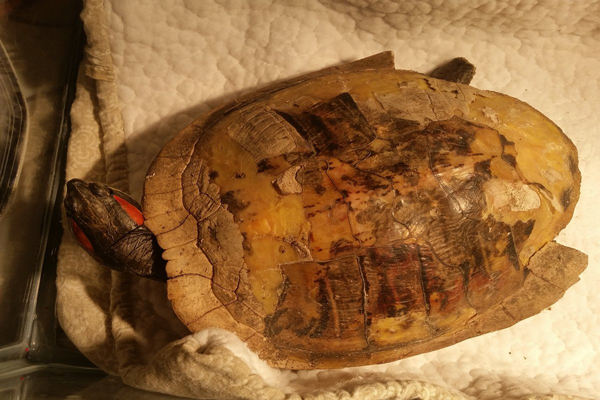 Elsa was found frozen in her enclosure.

The turtle was brought to the SPCA’s shelter hospital, seemingly lifeless when they put a heat pad under its carapace and covered it in a towel and placed a warming lamp above it. After several hours, the turtle opened its eyes and started moving about.

They determined that the turtle was a female, and named her Elsa, in reference to the Disney film “Frozen.” Elsa is missing toes and has a badly damaged shell but is expected to recover. The Pennsylvania SPCA is raising funds for surgery to remove dead tissue and to repair Elsa’s shell. She is eating fairly normally and has been given pain medications and antibiotics to prevent infection.

The Pennsylvania SPCA is investigating whether to file criminal charges. If you wish to contribute to the care of Elsa, visit Kintera.org.

Red-eared sliders , when cared for properly, can easily live longer than 20 years. They can also grow to about 12 inches in length. You can read up on the care of red-eared slider here.