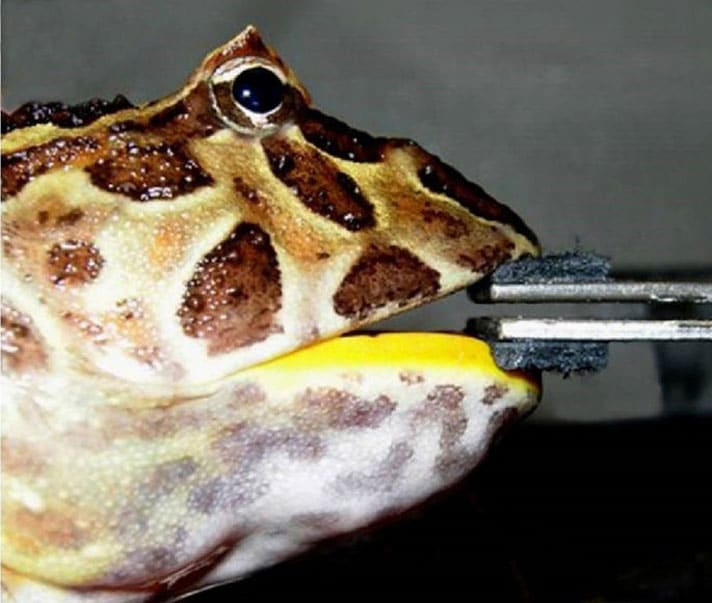 Do you have a horned frog? Did one ever bite you? If one has, you know they have a pretty powerful bite. New research on an ancestor of the horned frog, named Beelzebufo, or Devil Toad, (Beelzebufo ampinga) reveals that it may have had a bite force of up to 2200 newtons, or what the researchers claim is comparable to that of modern wolves and tigers. 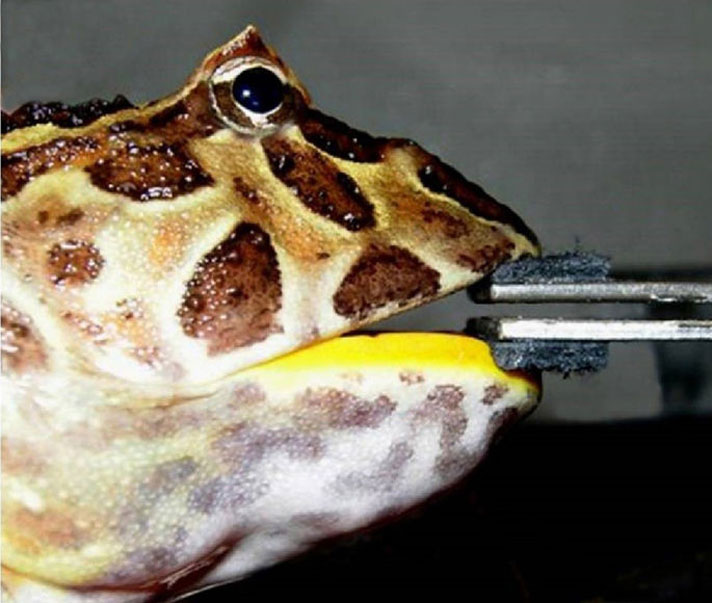 An individual Ceratophrys cranwelli biting a force transducer. Leather strips glued to ends of bite bars provide a natural surface that encourages high-effort biting and avoids damage to teeth and bones. The strips also indicate a bite point for standardization of bite-force performance.

“Unlike the vast majority of frogs which have weak jaws and typically consume small prey, horned frogs ambush animals as large as themselves — including other frogs, snakes, and rodents,” says Dr. Marc Jones, researcher at the University of Adelaide’s School of Biological Sciences and honorary researcher at the South Australian Museum. 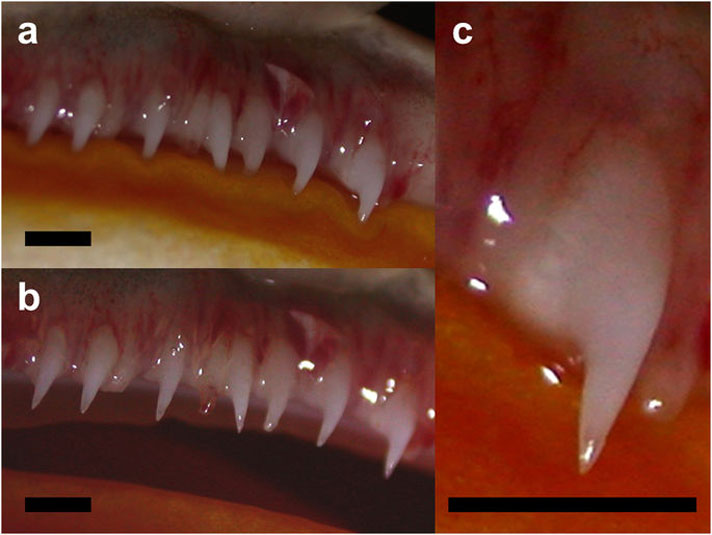 Teeth of Ceratophrys cranwelli. As with almost all other extant frogs bearing teeth, Ceratophrys has teeth only on the upper jaw. Unusual among frogs, the teeth of Ceratophrys exhibit a derived non-pedicellate morphology and have sharp recurved tips situated upon robust, labiolingually expanded bases. (a) view of teeth with jaws closed; (b) view of teeth with mouth slightly open; (c) close-up of single tooth. Scale bars = 1 mm–Scientific Reports.

have a head that is around 4.l5cm wide and have a bite force of around 30 newtons, or 3kg.

The researchers write that the bite force of the Ceratophrys frogs, coupled with an extremely adhesive tongue, give the frogs the capability to capture and restrain large prey with their vice-like jaws.

Beelzebufo on the other hand, had a head that was around 11.1 cm wide and a much larger bite force, between 500 and 2200 newtons.

“At this bite force, Beelzebufo would have been capable of subduing the small and juvenile dinosaurs that shared its environment,” Dr. Jones told News.com Australia.

That would have been a very powerful bite. The full research paper can be read here on Scientific Reports at Nature.com.