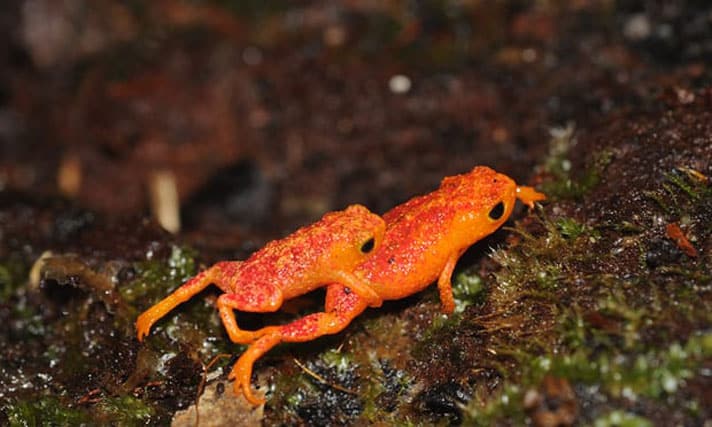 Pumpkin Toadlets Have Lost Ability To Hear Own Mating Calls

The toadlets continue the call because other frogs can still see visual cues, such as movement of the throat, researchers say.

The pumpkin toadlet (Brachycephalus ephippium) and another frog, Brachycephalus pitanga, highly toxic frogs native to neotropical rain forests of southeastern Brazil, have lost the capability to hear their own mating calls, according to a study conducted by research scientists from Brazil, Denmark and the United Kingdom. 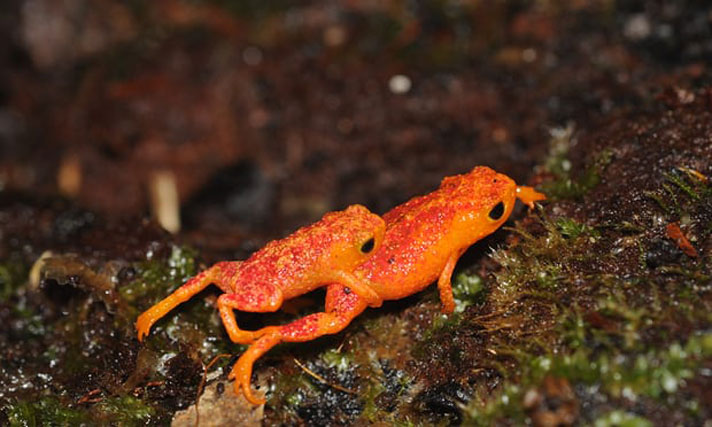 The pumpkin toadlet can no longer hear mating calls of the opposite sex.

The researchers claim that the two species continue to make high pitched mating calls, but their intended targets, the females that they wish to mate with, fail to hear the calls.

They believe this to be the first case in animal evolution in which a communication signal continues even though the target audience has lost the capability to hear it.

The study’s lead author, Dr. Sandra Goutte of Brazil’s Universidade Estadual de Campinas, São Paulo, was astonished that the recordings that she had broadcast sounded on deaf ears.

“I thought I would find the sound transmission pathway from the outside to the middle ear,” she said. “We didn’t think it would be possible that they would not be able to hear their own calls.”

Laboratory tests, which involved placing electrodes onto the frog’s nostrils and under some skin near its ear confirmed what Goutte had realized in the field. Anatomic studies of the species also confirmed that the part of the ear that is responsible for high frequency hearing was also determined to be non-functional.

“I guess they have lost the ability to hear the calls quite recently, Goutte told The Guardian. “The call is quite soft so maybe it has already decreased in function.”

Goutte believes that the toadlets continue the call because other frogs can still see visual cues, such as movement of the throat.

They also believe that because the frogs are highly toxic, and have no known predators, the auditory calling has not yet disappeared.