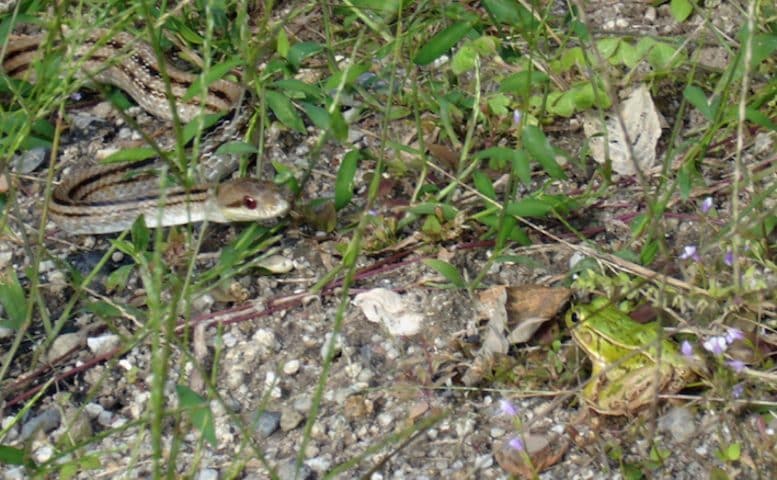 Who Flinches First In Frog And Snake Predator Prey Relationship?

It is a game of patience between predator and prey.

If you have seen the BBC’s "Planet Earth 2" documentary showing the racer snakes hunting the hatchling marine iguanas, you have seen a delicate yet deadly balance of essentially who will flinch first.

Researchers Nozomi Nishiumi and Akira Mori of Kyoto University’s Graduate School of Science, have detailed this predator/prey interaction of the dark-spotted frog (Pelophylax nigromaculatus) and the Japanese striped snake (Elaphe quadrivirgata) showing what is essentially a standoff of patience, and who will make the first move.

“When predator and prey face each other, it is generally thought that the initiator has the advantage that would mediate successful capture or escape,” Nozomi Nishiumi, co- author of the paper “A game of patience between predator and prey: waiting for opponent’s action determines successful capture or escape” published in the Canadian Journal of Zoology.

“However, in cases involving snakes and frogs, they occasionally move extremely slowly or almost not at all. It looks like they purposely avoid taking preemptive action.”

Nishiumi and Mori looked at the movements of Pelophylax nigromaculatus and Elaphe quadrivirgata both in the field and in controlled environments in the lab to see what the differences in actions were.

“In the staged encounters we wanted to look at the disadvantages of preemptive actions by analyzing the kinematic characteristics of each animal’s movements,” Nishiumi said in a research release published by Kyoto University. “The field observations, on the other hand, were designed to follow the consequences of the animals’ actions and survival.”

“The efficacy of this waiting tactic depends on the distance between them: the closer they are the less likely the counteraction succeeds,” Nishiumi said.

“In this regard, when approaching this critical distance, the animals appropriately switch their behaviors from waiting to taking action.”