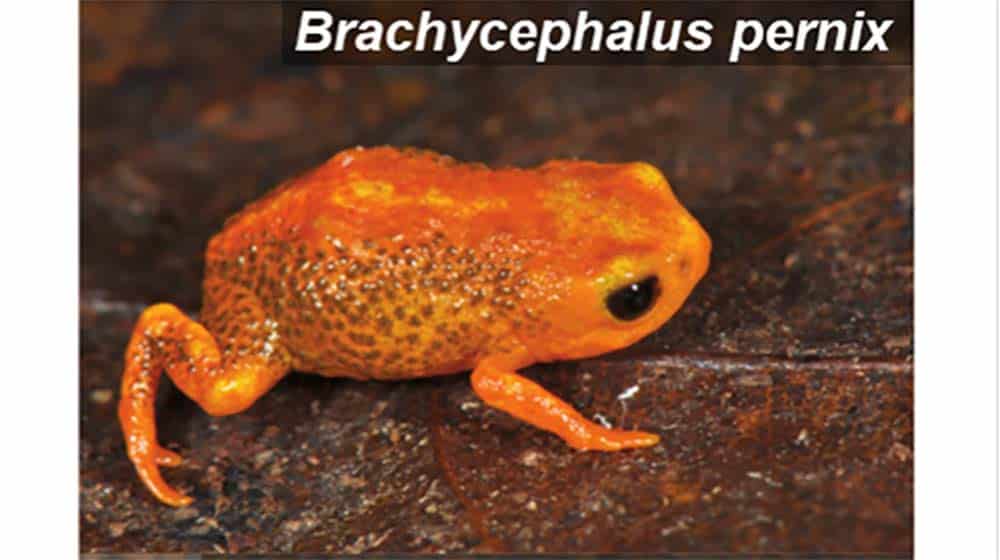 The researchers found these often landed with "uncontrolled landings and delayed hindlimb recovery."

When Brazilian Pumpkin Toadlets Jump, They Crash When They Land

Inner ear shape of miniature frogs cause crash landings when they jump.

Researchers studying Brazilian pumpkin toadlets of the family Brachycephalus have found that these small frogs cannot land upright after they jump. This is due to the miniaturizing effects of their vestibular system, which is comprised of the inner ear and brain. They, in effect, jump and crash.

The vestibular system controls balance and eye movements, and the semicircular canals of these small frogs have low sensitivity “to angular acceleration due to insufficient displacement of endolymph.” The endolymph is the fluid in the inner ear. What this does is causes the frogs lose postural control whey they jump. This in turn results in the “crash landing” effect as the frogs land, sometimes head over heels.

What they found was these often landed with “uncontrolled landings and delayed hindlimb recovery.”

“In summary, multiple lines of evidence indicate that the uncontrolled landing behavior of pumpkin toadlets results from a size-related constraint on the dimensions of the semicircular canals that has resulted in a loss of vestibular function (i.e., sensory feedback) due to Poiseuille’s law,” the researchers wrote in their paper.

“As a physical constraint, this phenomenon should not be restricted to this clade. Consequently, we expect that uncontrolled jumping behavior will characterize other unrelated miniaturized frog taxa.” Poiseuille’s law, or Poiseuille’s equation is a “physicallaw that gives the pressure drop in an incompressible and Newtonian fluid in laminar flow flowing through a long cylindrical pipe of constant cross section.”

The complete research paper “Semicircular canal size constrains vestibular function in miniaturized frogs” can be read on the ScienceAdvances website.