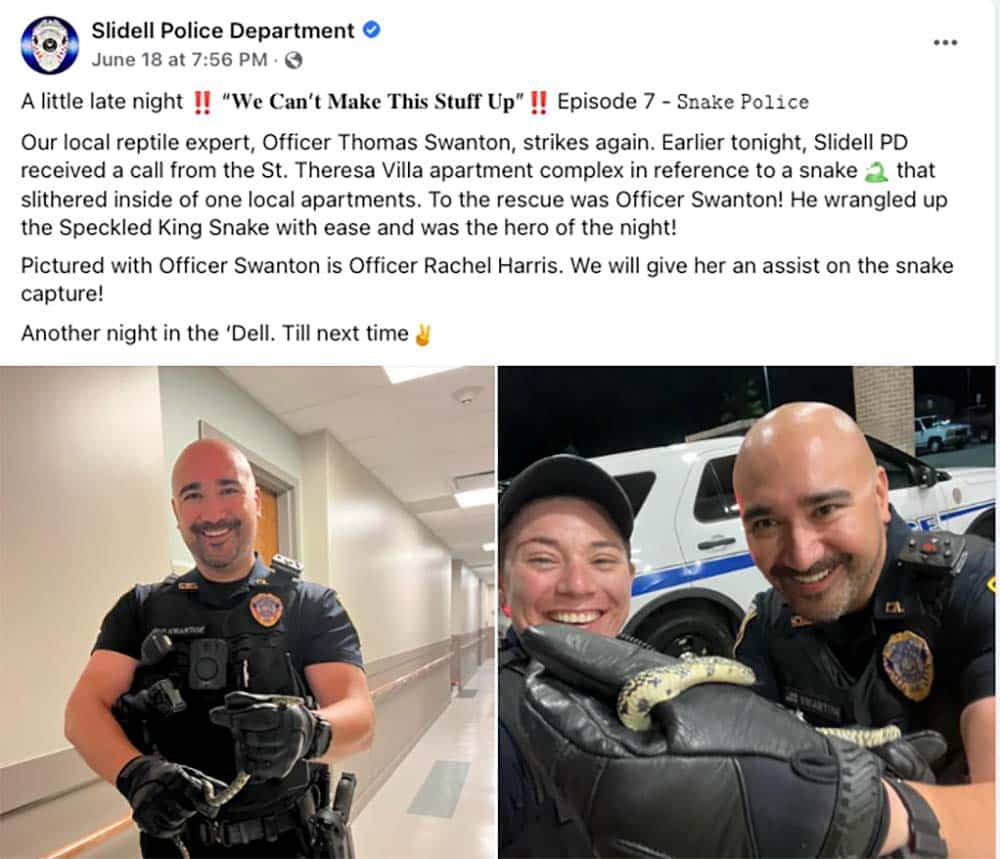 The officers released the snake in a field right outside the complex.

The speckled kingsnake grows to about four to six feet in length.

Swanton is no stranger to reptiles, as he keeps both a green iguana and a bearded dragon.

Louisiana Police Officer Thomas Swanton, who early this month captured a lost bearded dragon, has done it again. This time, however, he subdued a snake.

The Slidell Police Department reported on Facebook that Swanton and Officer Rachel Harris responded to a call about a snake that had found its way into an apartment building. When the duo arrived on the scene, Officer Swanton went to work. After clearing some stuff from a closet, Swanton found and identified the snake as a speckled kingsnake. He them moved more stuff out of the way and was able to get hold of  the snake (Lampropeltis holbrooki).

Swanton and Harris then left the apartment complex and released the snake in a field right outside the complex.

Swanton is no stranger to reptiles, as he keeps both a green iguana and a bearded dragon. Followers on the Slidell Police Department Facebook page were heaping praise on the officers, with one saying “Good thing there’s a reptile wrangler on the police force.”

The speckled kingsnake grows to about four to six feet in length and is found in wet areas such as swamps and rivers, swell as grassy fields and woodlands. Like most kingsnake species, the speckled kingsnake feeds on small mammals, rodents, birds, frogs, lizards, and of course, other snakes. It is captive bred and expels musk and poop to deter predators. It also shakes its tail like a rattlesnake.