Kingsnakes are snakes I like to see in the wild, but for more than 20 years now, have had no interest in keeping in captivity. However, in the 60s and 70s, when my breeding facility was more than a full-time enterprise, we bred almost every taxon then available. As I divested myself of the responsibility of captive care (I got tired of cleaning cages), the vast collection was divvied up between other breeders. I thought that my days of tree viper, rat snake and kingsnake care was a permanent thing of the past.

I startled myself about a year ago when I woke up one morning and intoned, “I think I’d like to get a classic pair of Apalachicola Lowland kingsnakes.” I was very careful that my wife Patti didn’t hear the intonation, for she, even more than I, is long past the cage-cleaning stage of her life.

Once I started to think about it, the thought became a quest, and within days the quest had taken on a life of its own. I found that it would be necessary to better define the search by posing and answering some questions (i.e., what did the term “classic” signify? Was it a color? A pattern? Was it physical appearance? Or was it something more?).

It turned out that the term classic, to me, inferred all of the above. But by analyzing the problem, the question of color and pattern came to the forefront. Apalachicola Lowland kingsnakes (Lampropeltis getula getula x Lampropeltis getula ssp.) epitomize color and pattern variability, and if you subscribe to the theory (which I do) that the patternless speckled form is probably the closest in appearance to the supposed ancestral stock, the blotched phase (the one that I had initially most wanted) then becomes the one most unlike the true Apalachicola Lowland kingsnake in appearance. Which did I want?

As I pondered that, another problem surfaced. Would I begin the quest by looking for the kings in the wild (I knew after about 30 years of trying and failing that this would be a real knock-your-head-against-the-wall exercise in futility) or would I look for captive-bred examples?

I now wanted both morphs and instead of needing one or two snakes, I needed three or four. With that in mind I was able to stop wondering whether I should try to find these snakes in the field or try to find captive-bred examples simply by prorating the time factor. Because I had found only one of these secretive snakes in 30-plus years of looking, to find four would take me about 125 years. 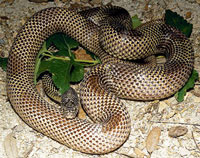 Apalachicola Lowland kingsnakes can also be found with blotched patterns.

The Search Begins
I started looking for the snakes in the classified ads of REPTILES and on the Internet. Maybe it was just the wrong time of the year, but that didn’t initially work well. There were plenty of Apalachicola Lowlands kingsnakes available (even if they were being advertised as “blotched” and “Goin’s” kingsnake), but the word classic entered again into the search. It seems that over the years, hobbyists had replaced classic with the term flame. Today, breeders seem to be trying their hardest to genetically engineer an Apalachicola Lowland kingsnake that resembles a milk snake in color. This is definitely not classic in my mind.

Then I happened to think of Chris McQuade and Sheila Rodgers, who had gotten some of my from-the-wild breeding stock more than 20 years earlier. Over the years they had kept the lineage alive, viable and had a couple of babies available. These were vaguely striped, but almost patternless. Suited me. So I got the babies and relearned that I liked them better in these later years than when I had first worked with the morph. I then decided I actually did want a pair of the blotched ones so I went back to Chris and Sheila. I should have stopped right there.

This is a striped morph of the Apalachicola Lowland kingsnake.

While perusing Apalachicola Lowland kingsnake offerings on the Internet, I happened to cross-reference over to the “classic” phase of the kingsnake from Florida’s southern peninsula (the kingsnake once called Brook’s king, but is now recognized as the true Florida king, Lampropeltis g. floridana), and noticed that it was no longer being offered. There were many references to the snake, but most were for white-sided, snow, flame, albino and anerythristic morphs.
The difficulty I was having in finding the Lowland and the Florida kings got me wondering how the more common eastern forms of kingsnake were faring in herpetoculture. I hopped from website to website and mused about early herping trips and the pleasure of finding those kingsnakes.

I remember coming southward to central New Jersey from Massachusetts on a spring morning and finding big, beautiful, white-chained, black eastern kingsnakes (Lampropeltis g. getula) hunting for turtle eggs along the edges of sloughs and marshes. They weren’t numerous there, but it only took the finding of one or two to make the trip a success.

I remember other trips when we went further south to the low country of southeastern South Carolina and found many eastern kingsnakes. I feel quite certain that although the eastern kingsnakes are still in these areas, they are now less common than in those long-ago days.

The memory of my friend Dennie Miller showing my friend Gordy Johnston and I dozens of eastern black kingsnakes (Lampropeltis g. nigra) under roadside trash in Arkansas is indelibly imprinted in my mind. The shiny black snakes were of sullen disposition and sparsely patterned with a vaguely discernible chain pattern and a peppering of light scales on their sides. I used to shake my head in disbelief at the vast number of speckled kingsnakes (Lampropeltis g. holbrooki), their bright yellow, pepper spots fairly glistening against their intense black body color, that I would see beneath debris on the sides of Louisiana levees as I made periodic herping trips to and from Mexico, Texas and Arizona.
When Gordy and I finally expanded our herping horizons as far south as Florida, we found eastern kings common on Paynes Prairie (only two kingsnakes have been found on the Paynes Prairie in the last two decades). These kings looked different than the eastern kings, but they were still recognizable.

We left the eastern kingsnake phenotype behind as we traveled further southward on the Florida peninsula. Near Lake Okeechobee we found ourselves amidst hordes of the brown and cream kingsnakes then known as Florida kingsnakes. Today they are recognized as the Florida Peninsula intergrade kingsnake (Lampropeltis g. getula x Lampropeltis g. floridana) and are thought of by most as snakes of the sod fields and sugarcane.

Strangely, eastern, speckled, black and intergrade kings with genes yet unsullied are readily available in herpetoculture. Certainly there are albinos and other morphs, but many with normal genes have not yet been overlooked.

The Florida king was once an easily found animal. Gordy and I would begin encountering Florida kingsnakes in Andytown, Florida, which was at the southeast junction of routes 84 and 27. If you walked the road shoulder eastward from Andytown, you could see 25 water snakes of various kinds and a half dozen big, yellow and tan Florida kings, and maybe an indigo too.

The scenario stayed that way for years. However, the Everglades were eventually drained, roads appeared, habitat disappeared and to find the kingsnakes you had to go further and further south.

The last place I found these kings in numbers was along a series of canals south of Florida City, and it is my understanding that much of that habitat has now been destroyed. The light yellow and olive-tan kingsnakes were never actually restricted to the extreme southern peninsula as many thought, but it was there, amidst the manchineel and buttonbush, that they were the most abundant.

I hunted for the Apalachicola Lowland kingsnake with my friend Ed Vetter.
Nada.

I hunted it again and again with my friend Ron Sayers.

And my friend Carl May and I plied the Apalachicola National Forest for years.

Then, early one sunny afternoon in late April, as Carl and I wandered through the forest, there in the tangled grasses near a bridge abutment laid an Apalachicola Lowland kingsnake. It was Carl’s first (he’s since found a second one), my first and only, and I never even got a picture good enough to commemorate the event.