New studies reveal it is not just about muscular power that can propel frogs great distances.

Just how do some frogs manage to leap such long distances? New research shows that the secret of their success lies in the structure of their tendons. Researchers at Brown University, filming frogs jumping at 500 frames per second with special X-ray technology, have discovered that the frog's tendons act rather like springs during jumping. Their findings could also help to explain why other animals are exceptional leapers. 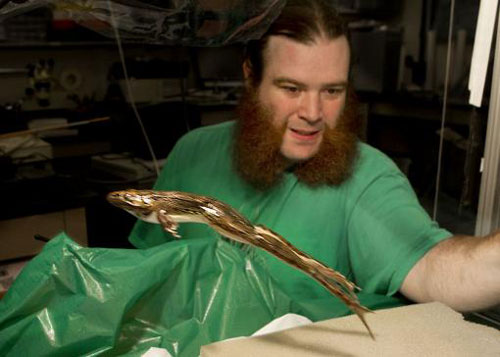 Some species of frog and many other animals are able to jump far beyond what appear to be their capabilities. This is well-documented in the case of the trained contestants taking part in the famous annual frog-jumping competition held in Calaveras County, California, but even ordinary frogs can leap several times farther than their physiology would seem to allow.

Muscles are not strong enough
"Muscles alone couldn't produce jumps that good," explains Henry Astley, who studies the biomechanics of frog jumping at Brown University.  Astley and Thomas Roberts, associate professor of biology, have revealed that the key to frogs' leaping lies in their elastic tendons.

Before jumping, the leg muscle shortens, loading energy into the tendon, which then recoils like a spring to propel the frog up, up and away. Even though as much as a quarter of a frog's mass is in its legs, it would be physically incapable of jumping as far without the assistance of its tendons.

"In order to get truly exceptional jumping performance, you need some sort of elastic structure," says Astley, a fourth-year graduate student in Roberts's lab in the Department of Ecology and Evolutionary Biology.  Astley and Roberts examined jumps by the northern leopard frog (Rana pipiens) a pond frog common in the northeast United States.

The pair implanted metal beads into the shin bone, ankle bone and leg muscle of four frogs and then recorded their leaps with 3-D X-ray video technology developed at Brown. The video, filmed at 500 frames per second and displaying the jump about 17 times slower than normal, tracks the changes in the leg muscle's length and joint movement before, during and after a jump.

Seeing what happens
As the frog readies itself to leap, its calf muscle shortens. After about 100 milliseconds, the calf muscle stops moving, and the energy has been fully loaded into the stretched tendon. At the moment the frog jumps, the tendon, which wraps around the ankle bone, releases its energy, much like a catapult or archer's bow, causing a very rapid extension of the ankle joint that propels the frog forward.

The entire jump – from preparation to leap – lasts about a fifth of a second, the experiments showed. Other frog species actually jump much faster. "It's the first time we've really gotten the inner workings, that we've put all the pieces (to frog jumping) together," Astley explains. "We now have a clearer idea what's going on."

How the tendons, muscles and joints work in frog jumping may help explain how other animals are such amazing leapers – ranging from invertebrates like the humble flea or the grasshopper to vertebrates like guinea fowl and bush babies.

"Frogs are interesting in their own right, but we are also confident that this study gives us insight into how muscles and tendons work together in animal movement generally," says Roberts. "Other studies have presented evidence for an elastic mechanism, but Henry's research gives us the first glimpse of how it actually works."