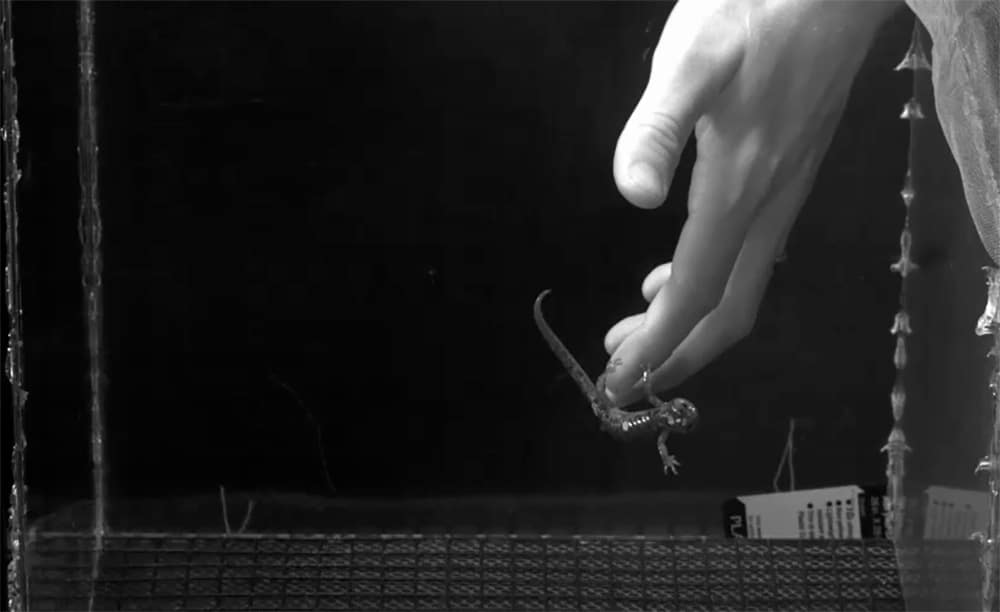 The salamander can effortlessly glide from tree branches and maintain a stable gliding position by adjusting its limbs and tails.

Wandering Salamanders Can Jump And Glide From World’s Tallest Trees

The wandering salamander is found in northern California and in British Columbia, Canada.

The salamander can effortlessly glide from tree branches and maintain a stable gliding position by adjusting its limbs and tails.

The wandering salamander (Aneides vagrans) an arboreal amphibian that lives in the crowns of the world’s tallest trees, the Coast redwood (Sequoia sempervirens), and can jump from the canopies of these trees when disturbed or threatened, according to a study published in the journal Current Biology. The salamander can effortlessly glide from tree branches and maintain a stable gliding position by adjusting its limbs and tails without the use of a specialized control surfaces, such as that found in gliding lizards.

The researchers tested the gliding capabilities of the salamander in wind tunnels and observed the amphibians parachuting consistently and were capable of slowing their vertical speed by 10 percent as they fell. The researchers also found that the salamanders combined the parachuting with undulations of the tail and torso to effect or change the gliding at non-vertical angles in 58 percent of the wind tunnel trials.

The wandering salamanders, in 45 wind tunnel trials, were able to control their pitch, roll, and yaw from a skydiving posture while keeping a dorsoventrally stable body posture. While the species lacks any aerodynamic features, they do have what the researchers call an unusual morphology that could help in their aerial performance capabilities.

These include a flattened body when compared to other climbing plethodontids, long limbs and digits, and large feet relative to their body size. The researchers say these body features are traditionally found in species with a highly arboreal lifestyle. They note the large feet and long toes form ventrally concave surfaces while parachuting and might produce useful lift and drag.

The wandering salamander is found in northern California and in British Columbia, Canada. It is a small salamander with a snout to vent length of about 3 inches and a total length of about 5 inches. The arboreal species is known to climb up to 40 meters in the branches of trees and feeds on ants, mites, beetles and their larva as well as snails, springtails and woodlice.

The complete study, “Gliding and parachuting by arboreal salamanders,” can be read on the Current Biology website.