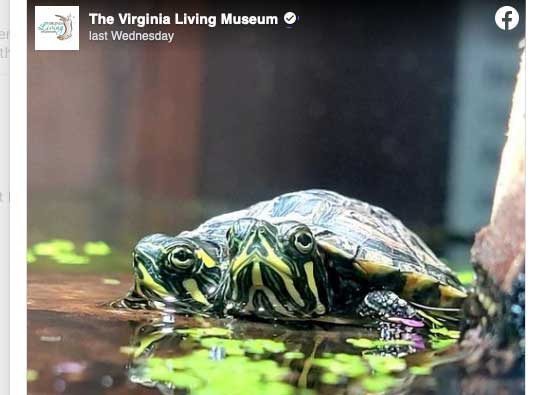 Bicephalism is probably the most common in reptiles that other animals, and it has occurred in snakes, lizards, and turtles. Screenshot via Facebook/Virginia Living Museum

Twix was about 2 years old when he passed away.

The two-headed turtle was rescued in Suffolk, Virginia two years ago and was brought to the museum as a hatchling.

Twix, a two-headed juvenile red-eared slider (Trachemys scripta elegans) that made his home at the Virginia Living Museum, has died. The museum announced his death April 20 on Facebook.

The two-headed turtle was rescued in Suffolk, Virginia two years ago and was brought to the museum as a hatchling. He had two heads, two brains, four eyes and shared a shell and legs. His condition is known as bicephaly, (having two heads).

“It is with a heavy heart that we share the passing of our two-headed, juvenile red-eared slider turtle, lovingly known as “Twix.” Twix died of natural causes last Thursday. He was rescued in Suffolk, VA in March of 2020 and came to the Museum as a hatchling,” the museum wrote on Facebook. “Born with a condition known as bicephaly, Twix had two heads, and with them came their own individual personalities and appetites! While this condition is relatively common for reptiles, it is extremely rare for them to survive, even under human care. In the wild, Twix would have lived only weeks, under the excellent care of the Herpetology Team Twix lived two years. The Herpetology Team worked closely with this unique turtle, tailoring Twix’s daily care to meet the unique challenges of providing for a turtle with two brains.”

“Thank you all for the kind words and condolences for the loss of Twix. It means so much to the Herps department and Twix’s keepers that we have the full support of our VLM community,” the museum’s herpetology curator said.

Bicephalism is probably the most common in reptiles that other animals, and it has occurred in snakes, lizards, and turtles. It seems, based on news reports of the phenomenon on ReptilesMagazine.com, the two-headed turtles don’t live as long two headed snakes or lizards. That is just based on news reports, and not any scientific study.