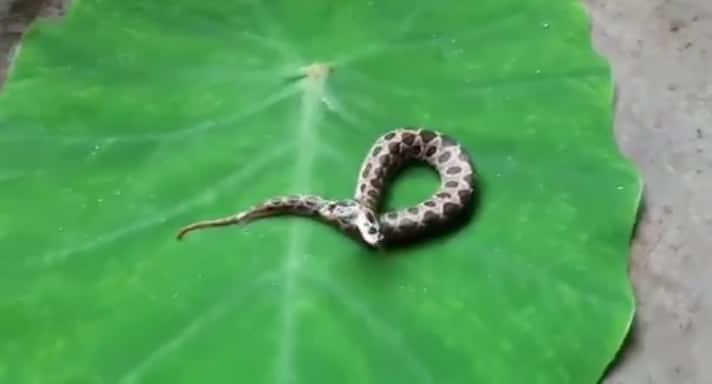 Susanta Nanda of the Indian Forest Service uploaded a video to Twitter of a two-headed Russell’s viper (Daboia russelii) that was rescued in Maharashtra, a state in the western peninsular region of India. The reptile will probably spend the rest of its days in captivity, given the survival rate of two-headed snakes in the wild is low.

Two-headed snakes are generally considered rare, but not uncommon. Over the years we have reported on two-headed monocled cobras, two-headed timber rattlesnakes, two-headed copperheads, and various other non-venomous snakes as well as two-headed lizards and even two-headed sea turtle hatchlings.

Because they have an independent head, movement is often compromised, with one head wanting to go one way and the other wanting to go another. This makes them ideal for predation. This Russell’s viper though looks fairly healthy.

The Russell’s viper is considered to be one of the most deadly snakes in the world. Its range includes the countries of Pakistan, Sri Lanka, Myanmar, Indonesia, and Taiwan. The nocturnal species has venom that is hemotoxic, which causes the destruction of tissue. Death occurs from cerebral hemorrhage and kidney failure.

The Russell’s Viper is far more dangerous than most poisonous snakes because it harms you even if you survive the initial bite. pic.twitter.com/ATwEFFjaGy

In certain areas of its range, the venom of this snake has a strong neurotoxic effect that causes muscle paralysis and respiratory distress.  It is well known that the venom of the Russell’s viper is effective in causing thrombosis, or what is widely known as blood clotting.

The Russell’s viper grows to around 5.5 feet (1.6m) in length with most specimens averaging around 4 feet (1.2m) in length. It is a terrestrial species and is often found in villages in the countryside as well as in highly urbanized areas. It feeds mostly on rats, and wherever there are humans, rats usually follow.