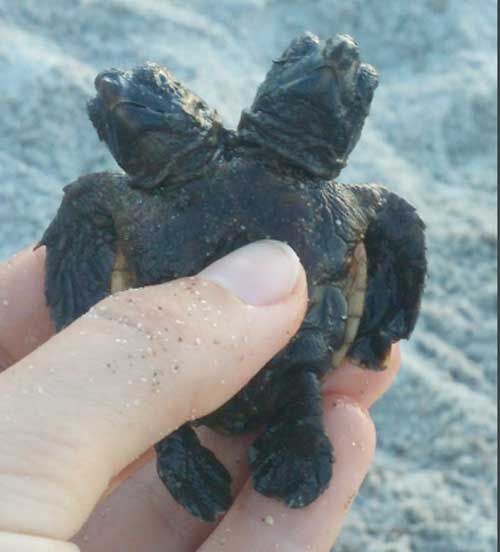 The chance of survival into adulthood for this little turtle is slim.

Interns with the University of Central Florida, conducting research south of Florida’s Patrick Air Force Base found a live two-headed baby Loggerhead sea turtle (Caretta caretta). The turtle was released, and according to the researchers, crawled energetically into the ocean.

"We often find stragglers in the nest and the two-headed turtle was one such straggler," Kate Mansfield, assistant professor and director UCF's Marine Turtle Research Group, told USA Today. "There are so many eggs laid by sea turtles throughout Florida. It is not uncommon to find unhatched eggs in a nest with embryos that ceased development for a variety of reasons, including developmental issues."

"The other two-headed hatchlings I’ve seen or heard of did not survive long,” Mansfield told USA Today. “I don’t know of any two-headed sea turtle adults. Personally, I’ve never seen one."

Two-headed reptiles are rare but not uncommon. Snakes seem to be the most visible two-headed herps, though there have been instances of two-headed bearded dragon lizards and other turtles that have survived into adulthood.