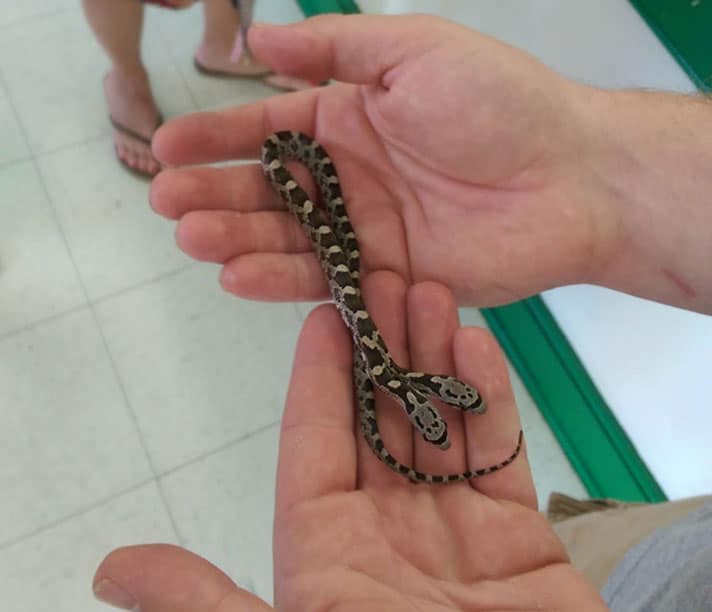 Pancho and Lefty have been in quarantine for 18 months and are now on display at the Cameron Park Zoo.

After about 18 months in captivity, a two-headed rat snake is now available for public viewing at the Cameron Park Zoo in Waco, Tex. 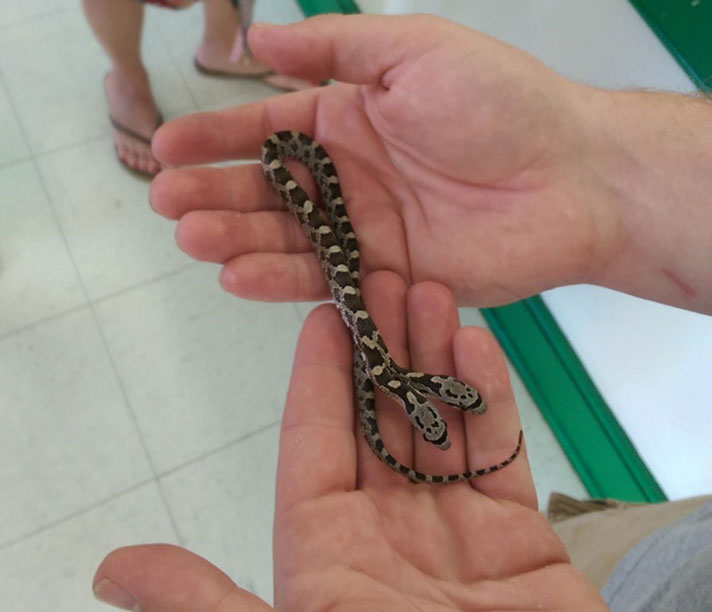 Pancho and Lefty have been in quarantine for 18 months and are now on display at the Cameron Park Zoo.

Named Pancho and Lefty by his keepers at the zoo, the two-headed snake was gifted to the zoo in 2016 after it was chased under a porch by a woman’s dog. The woman brought it to the zoo, where the snake, a male, was quarantined for about a year-and-a-half. And now he is on display.

“Right now it is about 18 inches and he is growing and will continue to grow,” Brian Henley, the zoo’s amphibian and reptile care supervisor, told the Waco Tribune Herald. “He should grow to be about 3.5 feet, or about 40 to 42 inches when he gets to be fully mature.”

TWO-HEADED SNAKE ON EXHIBIT! The two-headed ratsnake is now on exhibit in the Freshwater Aquarium. It is still eating…

Pancho and Lefty, named after the Townes Van Zandt song that Willie Nelson and Merle Haggard sang together as a duet, was about a foot long and six to eight weeks old when it was donated to the zoo.

“He wasn’t very big when we first got him and with any type of animal we want to be really careful with newborns,” Henley said. “They don’t have a good immune system yet, and especially with this snake with two heads, we wanted to make sure everything was going to be fine with him.”

The 18 months in quarantine has paid off because Pancho and Lefty are doing well, and both heads are eating pinky mice.

“Now, we are able to just put the food in and both heads will eat,” Henley told the Waco Tribune. “The left head is still the more dominant head, so the left head usually eats, but the right head, we’ve occasionally witnessed it taking food at the same time.”

Pancho and Lefty are now available for viewing in their own enclosure at the zoo’s Freshwater Aquarium exhibit, complete with vertical branches and plenty of hiding spots.

“Guests will just need to look for him, because the exhibit is set up to where the animal will still feel secure,” Henley said.

If you are in Waco, Tex., or are planning to  visit, be sure to stop off at the Cameron Park Zoo to have a look at Panch and Lefty. For more information about the zoo, visit the zoo's Facebook page at https://www.facebook.com/cameronparkzoo/

Rat snakes are fairly common in Texas and much of the Southwest. They, along with their corn snake cousins,  are very popular with reptile keepers, and are known for keeping rodent populations in check in the wild.