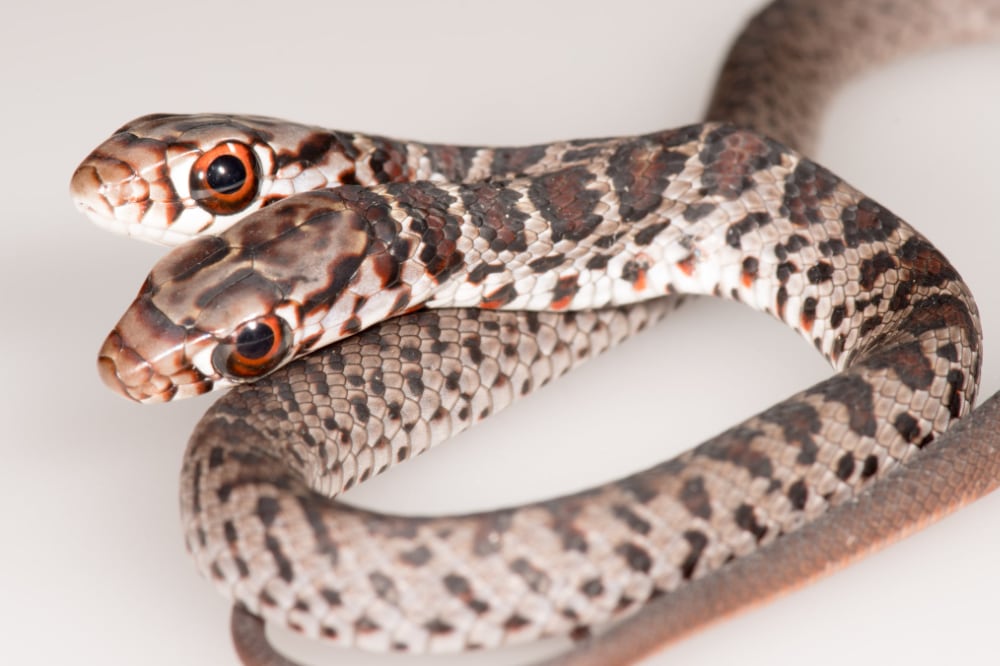 A two-headed southern black racer (Coluber constrictor priapus) was found by a Palm Harbor family in good health. The snake is currently at the FWC Fi

A two-headed southern black racer (Coluber constrictor priapus) was found by a Palm Harbor family in good health. The snake is currently at the FWC Fish and Wildlife Research Institute where it is currently being cared for. This phenomenon, known as bicephaly, is rare but not uncommon with reptiles. It occurs when two monozygotic twins failed to separate during embryonic development. This leaves the heads conjoined onto a single body.

“Both head’s tongue flick and react to movement, but not always in the same way,” the FWC Fish and Wildlife Research Institute wrote on Facebook. “Two-headed snakes are unlikely to survive in the wild as the two brains make different decisions that inhibit the ability to feed or escape from predators.

Because the reptile has two heads, it will probably spend the rest of its life in the care of the FWC or with an organization that educates the public about reptiles.

Two-headed snakes are generally considered rare, but not uncommon. Over the years we have reported on two-headed monocled cobras, two-headed timber rattlesnakes, two-headed copperheads, and various other non-venomous snakes as well as two-headed lizards and even two-headed sea turtle hatchlings.

Because they have an independent head, movement is often compromised, with one head wanting to go one way and the other wanting to go another. This makes them ideal for predation.

Southern black racers are common throughout much of the southeastern United States. A colubrid, the southern black racer feeds on variety of animals, including rodents, frogs, lizards, birds, and even other snakes. Some folks mistake this totally harmless reptile with cottonmouth snakes due to its white chin. Predators of black racers include red-shouldered and broad-winged hawks.