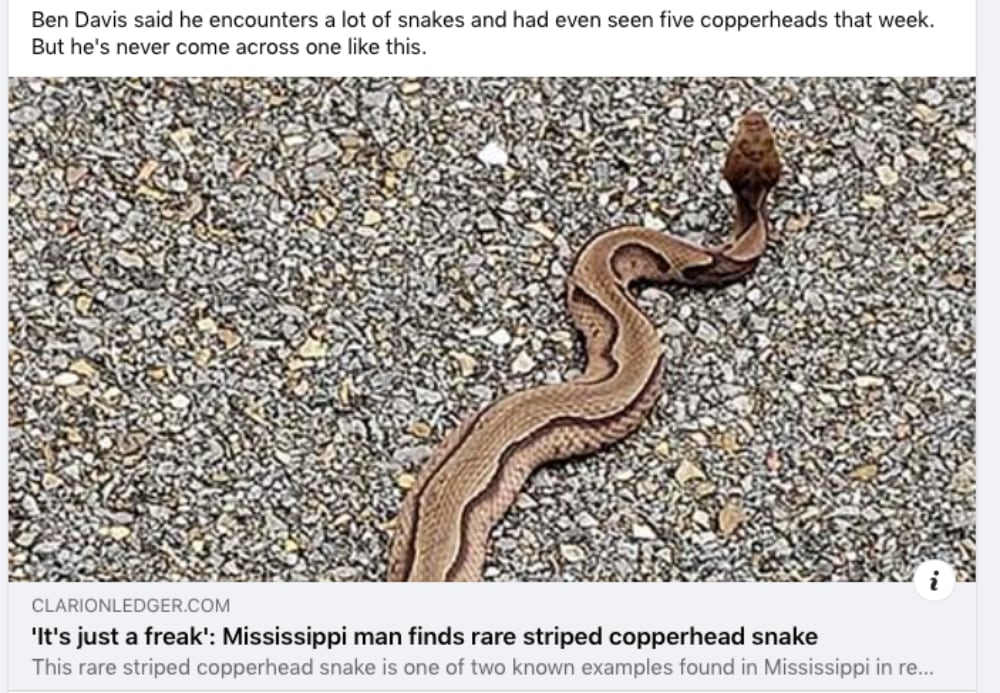 Ben Davis sees a lot of snakes when he is out driving the roads of Mississippi, but a few months ago while behind the wheel, one snake crossing the ro

Ben Davis sees a lot of snakes when he is out driving the roads of Mississippi, but a few months ago while behind the wheel, one snake crossing the road caused him to turn back.

“It was near Burnsville in Tishomingo County,” Davis told the Clarion Ledger when describing the initial sighting. “I was just going down the road. It was crossing the road when we saw it and it looked strange. So, we turned around and went back.”

Davis, who had already seen five copperheads (Agkistrodon contortrix) that day, was in for a surprise when he returned. The snake that he had returned to more closely inspect was a copperhead, but rather than sport the Hershey’s Kiss-style markings of a normal copperhead, this reptile was striped, more like a racer snake, with the telltale chocolate markings present on only the neck and tail area.
“It was so strange,” Davis said. “I’ve never seen one like that. I’ve got a degree in wildlife and and fisheries science, so I’m pretty familiar with all the critters in the state.”

Davis took a photograph of the snake and then went about his business. He then sent the photo to a friend who shared it on Facebook and it went viral.

It wasn’t the first striped copperhead to be documented in the Hospitality State. In 2020,  Mary Lambdin Dennis photographed a similarly striped copperhead in her driveway. Dennis and her husband were pretty sure the snake was a copperhead because of its distinctive markings on the tail. They were’n 100 percent certain and just left it alone.