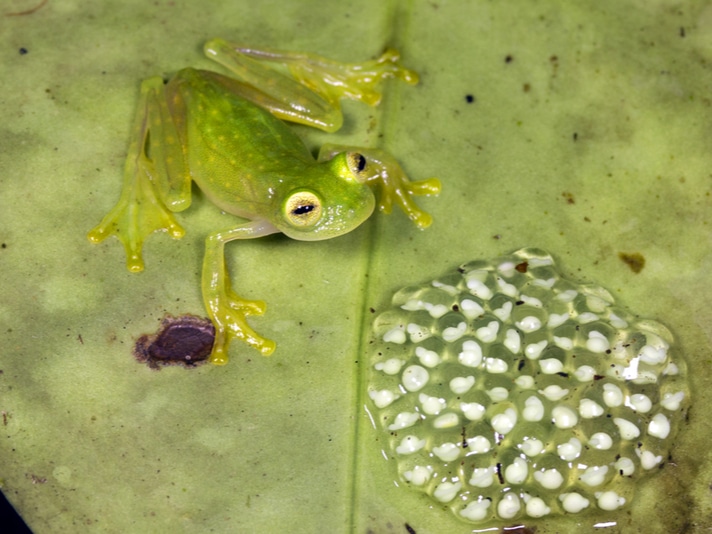 The glass frog is a tiny little amphibian of th family Centrolenidae that can be found in the rain forests of Central America, including Costa Rica, Panama, Venezuela, Colombia, Ecuador, and Peru. There are more than 100 known species of these frogs, which are primarily nocturnal and arboreal.

NatGeoWild, one of the few channels that broadcast actual science -based shows, released a clip of a male glass frog protecting its nest of eggs from predators. In this particular case, the little frog protects his eggs from rain forests wasps.

NatGeoWild calls him a little ninja frog because of the way he expels the wasps from his clutch of eggs. The little frog kicks the wasps as they crawl upon the eggs with his hind feet, which are pretty powerful given the little frog’s size.  It is a cool clip that shows an interesting defense mechanism that the little glass frog uses to protect his babies.

Glass frogs are largely arboreal and live along bodies of water such as rivers and streams in montane cloud forests. They lay their eggs outside of water, on leaves or shrubs that hang above water. They keep their eggs moist by transferring moisture from their skin to the eggs to ensure they don’t dry out. As the eggs hatch into tadpoles they drop into the water below the nest.