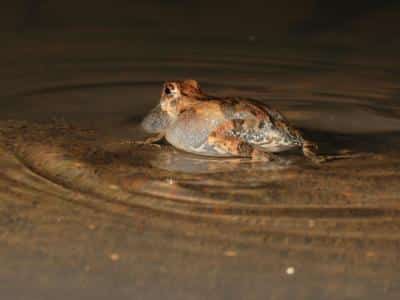 When túngara frogs call out to find a mate, bats sense it.

When semi-submerged male túngara frogs (Physalaemus pustulosus) call out to potential mates in a practice called trilling, they create ripples in the water that serve as targets for rival frogs as well as bats that like to eat these frogs, according to scientists with the University of Texas at Austin, the Smithsonian Tropical Research Institute (STRI), Leiden University and Salisbury University.

According to the study, the researchers determined that the fringe-lipped bat (Trachops cirrhosus), a frog eating bat, is more likely to go after a frog that is trilling with ripples radiating into the water from the frog's body than a frog that is only trilling, suggesting that the bat uses echolocation to detect the water ripples. When the frog is trilling in areas surrounded by leaf litter, the echolocation is less effective as the leaves prevent the ripples from moving away from the amphibian. 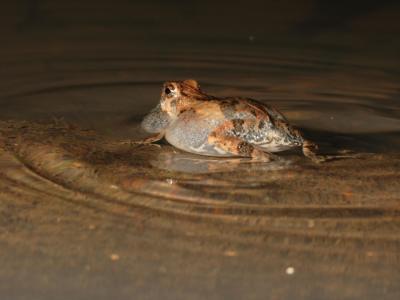 Ripples continue for several seconds after a male tungara frog has stopped calling.

"The interesting thing is that these frogs have evolved a strategy to escape predation," said lead author Wouter Halfwerk, a postdoctoral researcher at UT Austin who is also affiliated with STRI and Leiden University. "When a frog detects the shadow of a bat overhead, his first defense is to stop calling immediately. Unfortunately for the frog, the water ripples created by his call do not also stop immediately. The ripples continue to emanate out for several seconds, creating a watery bull’s-eye on the frog. Bats use the ripples, thereby beating the anti-predator strategy."

The frog trilling and causing ripples in the water also attracts rival frogs, the study concluded. When a frog trills and makes ripples in the water, rival frogs are more likely to respond, but with more gusto. Trilling frogs making ripples that are outside a rival's zone of defense, a circle of around 15cm across causes other trilling frogs to call more than twice as fast than if they heard just the initial call itself. Calls inside the safety zone were met with little or no calls, suggesting that the frog was getting ready to fight or escape.